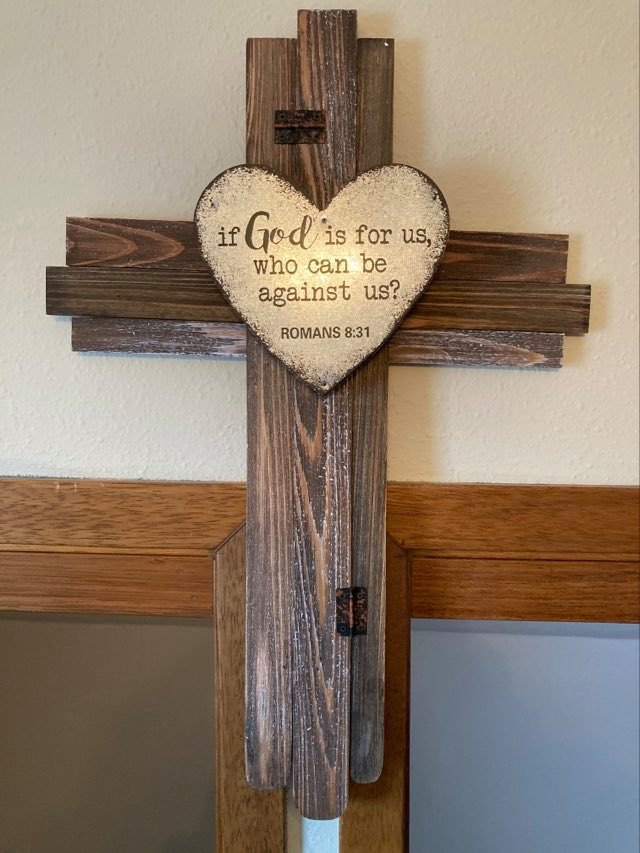 One of Satan’s primary weapons against Christians is his accusations (Revelation 12:10). Satan delights in accusing believers of wrongdoing because this is the way he achieves victory over sinners. He knows these accusations can increase our sense of shame which increases his control over us. He uses these accusations to keep us from drawing near to God and trusting in Him. Accusations that say, “God could never love you in light of what you have done. You have done too many wrong things for God to ever forgive you. God is against you. You are worthless and unwanted in the sight of God. Serving God does not pay. God will not keep His promises to you because He only cares about Himself.” Do you ever have thoughts like these? I certainly do.

An important truth God has given us to combat these accusations is found in Romans 8:31 where the apostle Paul writes: “If God is for us [and He is], who can be against us” (8:31)? When we think God or someone else is against us, God says, “Since I am for you (and no one is greater than Me), no one can successfully oppose or accuse you!” This includes those in authority over us, family, friends, and even the devil and his demonic armies. As a preacher once said, “One plus God is always a majority.” Does it always feel this way? No. But our feelings do not always tell the truth.

You may respond, “But God, how do I know You are for me?” Paul writes, “He who did not spare His own Son, but delivered Him up for us all, how shall He not with Him also freely give us all things?” (Romans 8:32). When we were enemies of God, He gave us His only perfect Son to die in our place (Romans 5:6-8). If God gave us His best when we were at our worst, how much more will He give us now that we are His beloved children!?!

The Cross of Jesus Christ guarantees the enemy’s defeat because Satan achieves victory through accusing sinners. But through the Cross, Jesus would deal with sin once and for all. “13And you, being dead in your trespasses and the uncircumcision of your flesh, He has made alive together with Him, having forgiven you all trespasses, 14 having wiped out the handwriting of requirements that was against us, which was contrary to us. And He has taken it out of the way, having nailed it to the Cross. 15 Having disarmed principalities and powers, He made a public spectacle of them, triumphing over them in it.” (Colossians 2:13-15).

We can never fully comprehend all that Jesus accomplished for us on the Cross. The Cross is infinite in its depth, because it is the total expression of God’s grace to us in Jesus. Before we became Christians, we were “dead in” in our “trespasses,” but God “has made us alive together with” Jesus. How? “Having forgiven” us “all trespasses” (Colossians 2:13). Think about this for a moment. God says “all” our sins are “forgiven” through Jesus’ death on the Cross.When Jesus died in our place nearly 2,000 years ago, we were not even born yet. So all of our sins were yet future in the mind of Christ when He hung on that Cross. The forgiveness Jesus provides for believers includes our past, present, and future sins. But that is not all.

The Bible tells us that Jesus’ death “wiped out the handwriting of requirements that was against us, which was contrary to us. And He has taken it out of the way, having nailed it to the Cross” (Colossians 2:14). The word translated “wiped out” (eksaleíphō) means “to completely erase, obliterate, remove, or wipe away.” It refers to the process of washing a piece of parchment clean for reuse. 1  Not only was the parchment clean enough to be written on again, it showed no evidence of ever having been written on in the first place.

When a person was executed under Roman law, the sentence was attached to the accused’s Cross (see John 19:19). But Jesus took our sentence away, effectively nailing our certificates of debt to His Cross. He paid our penalty in full; He died for our guilt. 2  God “made Him who knew no sin to be sin for us, that we might become the righteousness of God in Him.” (2 Corinthians 5:21).

Jesus’ blood washed away any record of our previous sins and accusations against us. This is why the Cross of Jesus Christ is the only answer to the shame that lies at the core of our being. All of our sin and shame was dumped on Jesus as hell unleashed its deepest fury upon Him while He hung on that Cross. Satan can no longer refer to the list of charges against us because it was nailed to the Cross forever! So what Satan does is make up his own accusations which are lies from the pit of hell.

Jesus’ death on the Cross “disarmed principalities and powers, He made a public spectacle of them, triumphing over them in it” (Colossians 2:15). The First Coming of Christ accomplished a spiritual victory over Satan and his kingdom. “A fallen angel is no match for the Son of God, who took away Satan’s rulership. Satan is actually the transliteration of a Hebrew word meaning ‘adversary’ or ‘accuser.’ He is ‘the accuser of our brothers and sisters’ whom he ‘accuses . . . before our God day and night’ (Rev 12:10). He accused Job (see Job 1:9-11; 2:4-5) and Joshua the high priest (see Zech 3:1). But in light of the atoning sacrifice of Christ, Satan’s accusations are empty.

“If somebody has a gun pointed at you, whether or not it’s loaded is a huge deal. The devil doesn’t want you to know that his gun has been emptied by the Cross of Christ. Now, if you don’t know that, you’re still going to cower and run, living in fear and shame. But you don’t have to listen to him. Though he is right about your sin, your debt has been paid by Christ. You are free to live for God. Satan still has power, but he no longer possesses final authority in history.” 3

The Cross of Christ is the only answer to the accusations of Satan and the shame that accompanies them. The death of Jesus is the only thing that can set us free. It has for all time declared our infinite value. We truly do matter to God!

Unfortunately, churches can shame people for struggling with sin and shame. When they do that, they are becoming Pharisees of further condemnation instead of priests of hope. We can deepen the shame of believers with the bony finger of a critical god, instead of revealing the open arms of the crucified Savior. We may think we have to defend God’s purity even though Christ took the filth of our sins upon Himself.

I am not suggesting that churches accept the world’s standards of behavior. But in our efforts to keep the church pure, we have beaten up the souls of broken men and women who are crying to be free from the shackles of shame. We have become modern-day Pharisees and we do not even realize it. God’s most powerful weapon is grace; but it has been cast aside in our efforts to be spiritually pure. The irony of this is that the modern-day Pharisee is just as obsessed with sin as the one who is consumed by it – one to avoid it, the other to live in it. Both need to come back to the Cross to find lasting freedom.