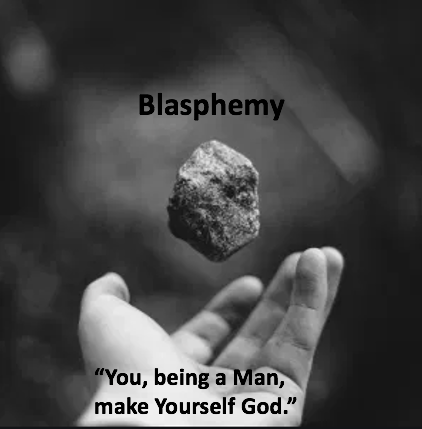 “Jesus answered them, ‘Many good works I have shown you from My Father. For which of those works do you stone Me?’ ” John 10:32

Jesus claimed to be God and you can tell that He is by what He said and the way He acted. In the context of our passage today, Jesus had claimed to be “the Good Shepherd” (John 10:11, 14) who had the “power to lay down” His life and “the power to take it [up] again” (John 10:18). Anyone can lay his or her life down in death sacrificially, but only Jesus Christ could “lay it down” and then “take it [up] again” in resurrection! This is what separates Jesus Christ from all other religious leaders and founders. All other religious leaders and founders in history are still dead in the grave. But Jesus Christ is the only One who had the authority to take up His life in resurrection proving that He is God (Romans 1:4). Christ also referred to God as “My Father”(John 10:18c). Jesus said He had the power to give eternal life to those who believe in Him (John 10:28a) and the power to guarantee security forever (John 10:28b). Finally, He claimed oneness with His Father in the sense that He and the Father both provide the sheep with security forever (John 10:30). That is something only God can do. Hence, He is saying that both He and the Father are God.

That Jesus claimed to be God can be seen in the Jews’ response to Him. “Then the Jews took up stones again to stone Him.” (John 10:31). The word translated “took up” (bastazō) probably means “to carry” in this verse since there would not have been many loose stones in Solomon’s porch in the temple. But not far away was the temple in the process of being built. Surely many stones could be found there. Hence, the Jews picked up stones to throw at Jesus because they understood Him to claim to be equal with God. The Law sentenced a blasphemer to death by stoning (Leviticus 24:13-16). The crowd was hostile and unwilling to permit due process of the law to take its course. Jesus gave these people more than enough evidence that He was the promised Messiah-God, but they were determined not to believe in Him.

Likewise, there are many skeptics today who ignore the sufficient evidence concerning Jesus’ identity as the Messiah-God. How does God want you and I to respond to those who deny the evidence concerning the fact that Jesus Christ is God? The same way Jesus did. We will look at several principles the next few days from these remaining verses about how to respond to skeptics who deny that Jesus is God.

The first way God wants us to respond to skeptics is to CONFRONT THEM WITH QUESTIONS (John 10:32-33). In other words, take the offensive, not the defensive. These Jews had their stones in their hands stretched back to hurl at Christ, and Jesus calmly and courageously says, “Many good works I have shown you from My Father. For which of those works do you stone Me?” (John 10:32). Jesus spoke before they could act because He was not willing to let them kill Him before His time. Besides, it was the Father’s will that He should die by crucifixion, not by stoning. Christ had healed both the lame man and the man born blind on the Sabbath. He had healed many different people and He wants to know for which of these miracles did they want to kill Him. What miracle ever called for the death penalty? This question confronted them with the absurdity of executing a man for restoring people who had suffered from afflictions.

Look at the Jews’ answer to this question. Their response demonstrated that Jesus claimed to be God. “The Jews answered Him, saying, ‘For a good work we do not stone You, but for blasphemy, and because You, being a Man, make Yourself God.’ ” (John 10:33).  They did not think this through. They were not going to kill Jesus because of His works, but because of His Words! Because He, “being a Man, makes” Himself to be “God.” Please note that this would only be blasphemy if Jesus was not God. But nowhere does Jesus correct their understanding of His claim to be God as if they had misunderstood Him. A man was not making himself out to be God – God had made Himself into a Man (cf. John 1:1, 14, 18)! Jesus was the God-Man!

These religious leaders could not accept Jesus’ claim to be God. They would not accept that He was telling the truth. Our Creator is one God in three Persons: Father, Son, and Holy Spirit (Genesis 1:1; Matthew 28:19). And Jesus Christ is one Person with two natures – divine and human (John 1:1, 14). John is urging his readers to be like Jesus and take the offensive, not the defensive when dealing with skeptics.

For example, if someone says to you that they do not believe Jesus claimed to be God, then ask them why these “religious experts” were incited to pick up stones to throw at Jesus? What did they understand Jesus to claim in verse 33? These prominent Jews understood Jesus’ claim to be God. Then ask the skeptic, “If Jesus’ enemies understood Him to claim to be equal with God, why won’t you understand this? Why do you refuse to understand what the scribes and Pharisees understood? If Jesus was not really claiming to be God, He could have easily corrected the Jews’ misunderstanding here. Why didn’t He correct their understanding here if He was not claiming to be God?” It is obvious that He did not correct their understanding that He claimed to be God because they were correct to understand He was in fact claiming to be God. Only a clear claim by Christ to be God would have incited these professional religious experts to take such drastic action.

If a skeptic tells you he does not believe the Bible, ask him, “What part of the Bible don’t you believe?” Some skeptics have never even read the Bible. All they are doing is repeating something they heard someone else say. The same is true of those who deny that Jesus is God. Rather than study the words and works of Jesus for themselves, they simply repeat what others have told them about Christ.

Prayer: Father God, You have given us the privilege of proclaiming Your gospel message to a lost world. Many in the world have been taught that Jesus Christ never claimed to be God. Yet we have seen in the historical record today that Jesus’ Jewish audience understood Christ to claim to be equal with God the Father. Lord, please give us the wisdom and the courage to take the offensive with skeptics by confronting them with questions about their rejection of Christ as God. Let us not allow Satan to deceive others with our silence. Use our voices to boldly proclaim that Jesus is God Who freely offers eternal life to all who believe in Him. And only God can guarantee that those who possess eternal life can never be snatched out of His hand. Hallelujah my great God and Savior. In Jesus’ name. Amen.