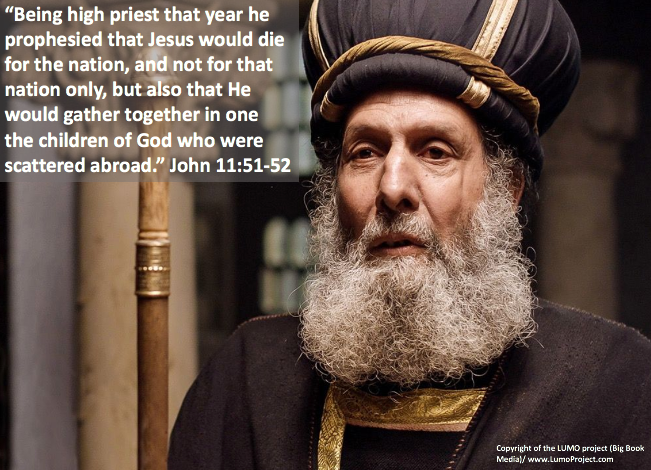 “51 Now this he did not say on his own authority; but being high priest that year he prophesied that Jesus would die for the nation, 52 and not for that nation only, but also that He would gather together in one the children of God who were scattered abroad.” John 11:51-52

After Jesus miraculously raised Lazarus from the dead in front of many Jews who had come from Jerusalem to console the family of Lazarus (John 11:28-44), many of those Jews believed in Jesus for everlasting life (John 11:45) while some began to plot against Christ (John 11:46-48). We are learning from this conflict over Jesus’ miracle how the providence of God and the plans of people work together for God’s glory. The first principle we learned is that plans to oppose Christ can arise from fear and jealousy (John 11:45-48). Today we learn the second principle which is to REALIZE THAT GOD USES THE PLOTS OF MAN TO ACCOMPLISH HIS PURPOSES (John 11:49-53).

“And one of them, Caiaphas, being high priest that year, said to them, ‘You know nothing at all.’ ” (John 11:49). No man comprehended the situation better than Caiaphas, the son-in-law of Annas. He was the high priest “that [fateful] year.” He served as high priest from 18-36 A.D. 1  “﻿Originally the high priest held his position for a lifetime, but the Romans were afraid of letting a man gain too much power. So the Romans appointed high priests at their convenience.” 2 Caiaphas’ first words reflect rudeness to his fellow Sanhedrin members, “You know nothing at all.” Rudeness was common among the Sanhedrin members. He correctly observes that they have no solution to their problem.

Caiaphas then proposed a solution to their problem. “… Nor do you consider that it is expedient for us that one man should die for the people, and not that the whole nation should perish.” (John 11:50). The Sanhedrin could not figure out that it would be to their advantage, and that is what they cared the most about, that Jesus die at the hands of the Romans instead of the entire nation. Caiaphas proposed the death of Christ as a solution to the immediate political problem. Politicians are often willing to sacrifice the other guy for their own benefit. Ironically, ﻿“their rejection of Jesus did not solve their problem. The Jewish people followed false shepherds into a war against Rome (A.D. 66-70), which did in fact destroy their nation.” 3

John then explains that Caiaphas’ words were prophetic. “Now this he did not say on his own authority; but being high priest that year he prophesied that Jesus would die for the nation.” (John 11:51). What Caiaphas meant to be cynical political realism; God meant to be understood in a deeper, more significant way. Caiaphas only had political interests in mind, whereas God had spiritual interests in mind (Acts 4:27-28). The prophetic quality of Caiaphas’ words is attributed to his priestly office, not his personal character. Because of Caiaphas’ office, God spoke providentially through him even though Caiaphas was not conscious of his word’s spiritual significance. Jesus’ death would be in place of the Jewish nation. If He would die, they would live. Christ would be their Substitute.

A former Thai navy seal diver, Saman Gunan, heroically died on July 6, 2018, while placing oxygen tanks along the twisting passageways of a cave flooded by monsoon rains in Thailand where twelve boys (ages 11 to 16) and their soccer coach were trapped since June 23, 2018. Eventually the entire soccer team was rescued between July 8 – 10, 2018. Saman died so this soccer team and their coach could live. Out of love for these boys and their coach, he laid down his life for them. Likewise, Jesus Christ loved you and me so much that He died on a cross as our Substitute for our sins so we could live forever the moment we believe in Him (John 3:14-16).

But there is more. Caiaphas continued, “And not for that nation only, but also that He would gather together in one the children of God who were scattered abroad.” (John 11:52). Caiaphas’ words were not just for Israel, but for the whole world. John has a world-vision in mind. This refers to uniting Jews and Gentiles around the world into“one” body, the church (cf. John 10:16; cf. Ephesians 2:14-18; 3:6). Sin scatters people, but the Savior unites them. Only Christ can unite the nations and cultures of the world into one body. Governments cannot do this. The United Nations cannot bring world peace nor can Black Lives Matter. But Jesus Christ can because He changes people from the inside out.

Do you remember the story of Joseph in the Old Testament? After Joseph’s father, Jacob, died, his brothers fear that the only thing that has kept Joseph from taking revenge on them has been his respect for his father. So, they come to Joseph begging for forgiveness – even though he gave them that forgiveness many years earlier. How does Joseph respond? Does he avenge the wrongs that they did to him?

He said, “You meant evil against me; but God meant it for good” (Genesis 50:20a).  Joseph doesn’t try to rewrite history saying, “Oh, I know you guys didn’t mean it.” He is honest – “You guys tried to harm me – but God intended your harm for good.” Romans 8:28 says, “We know that God causes all things to work together for good for those who love God and are called according to His purpose.” This “all things” means “all things” – including people’s evil intentions, their desire to cause harm, and sin. This is an absolutely amazing promise from God! Nobody can do anything to you that God cannot bring good from.

We see it clearly in Joseph’s life – sold into slavery, falsely accused and imprisoned – which was exactly where, in the strangest kind of way, Pharaoh, would be able to hear about him. Then Joseph says, “God meant it for good, in order to bring it about as it is this day, to save many people alive” (Genesis 50:20b). Joseph experienced tremendous pain – heartache, difficulty, problems, but God used all of that for incredible good – the saving of many lives. And as it turned out, not just the people of Egypt, but also his own family – including the very men who did him wrong – his brothers.

Can you relate to Joseph? Perhaps God has used the most painful experiences in your life involving believers who betrayed you to help and bless others. He has used your weaknesses and failures much more than He has used your so-called strengths. It is important for us to see God’s ability to do far more through our trials or failures than through our successes. God causes all things to work together for good for those who love Him and are called according to His purpose. That means that many can gain through our pain!

The religious leaders had evil intentions toward Jesus, but God intended to bring good from their rejection of His Son. Jesus’ death would unite Jews and Gentiles into one body, the Church. Christ’s substitutionary death on the cross would pay the penalty for the sins of the world so that all who believe in Him may be reconciled to God and have everlasting life (John 3:14-16; Romans 5:10; Ephesians 2:16).

Christ’s work in our lives can turn enemies into friends. He can bring men and women back into harmony with each other. But it begins by resolving our conflict with God. The Bible says that before we come to Jesus Christ we are in conflict with God. “For if when we were enemies we were reconciled to God through the death of His Son.” (Romans 5:10). Before we became Christians, we were God’s “enemies” because of our sin. God hates sin (Genesis 6:5-7; Deuteronomy 25:16; Proverbs 6:16-19; Romans 6:23; Hebrews 1:9), but He loves the sinner (Romans 5:8). Jesus Christ came to this world to make peace between humanity and God, to resolve this conflict. This is the key place to begin in resolving conflict in all of our relationships. Jesus died in our place to pay the penalty for our sins so we could be “reconciled to God.” The moment we believe in Christ “we have peace with God” (Romans 5:1). Once we gain peace with God we can learn to live peacefully with one another.

“As parts of the same body, our anger against each other has disappeared. For both of us have been reconciled to God and so the feud ended at the cross.” (Ephesians 2:16 – TLB). Paul is talking about conflict between nations in this verse, but this works between people too. “The feud ended at the cross.” God is able to resolve the conflicts in our lives. Many conflicts between people could be solved overnight, if both parties involved would come to know Christ because of the power that He has to resolve those conflicts we face in our lives.

For me, this is the most everyday advice I could give anyone. In my relationships with people, my relationship to Jesus Christ more than anything else sets the tone for the ability to handle the conflicts that we face. He gives me the ability to think in a different way and relate in a different way. Finding the love of Christ helped me find the forgiveness in my life that built the foundation of strength for all of my relationships. Finding the love of Christ also gives me the strength to forgive others. If you are going to resolve conflicts you have got to have that strength.

What relationship in your life still has walls to tear down? Whom do you despise? Maybe you dislike the way they look, talk, walk, laugh, and work. You detest being near to them. How can Christ slowly take down those walls one brick at a time so you can live peacefully with them? Ask Him to show you. He is our Peace (Ephesians 2:13-14) and He can teach us to live in harmony with others.

Prayer: Dear Lord God Almighty, Your ways are so much higher than ours. While evil politicians proposed the death of Jesus to advance their own plans and welfare, You providentially intended Jesus’ substitutionary death to save the nation of Israel and the entire world from eternal death. And not only that, Christ’s death would unite Jews and Gentiles into one body, the Church. Over and over again we see throughout history that sin divides people, but our Savior died to unite people of all colors, cultures, and countries. Many of us are not able to resolve conflicts with people because we are still in conflict with You. Our sin separates us from You, Oh Lord. But Your only Son, Jesus Christ, died in our place for all our sins and rose from the dead to reconcile us to You. Oh Lord, I pray that those who are still in conflict with You will recognize that Jesus can resolve that conflict by freely forgiving all their sins and giving them eternal life the moment they believe in Him alone. Then He can give them the strength to love and forgive those they are in conflict with. And if we are all honest with ourselves, we must admit that there are people in our lives that we despise for whatever reason. Please show us today how we can begin the process of taking down those walls we have built so we can live peacefully them. It may begin with the words, “I am truly sorry for what I have done. I was only thinking of myself. Help me to see things as you do.” In Jesus’ name. Amen.