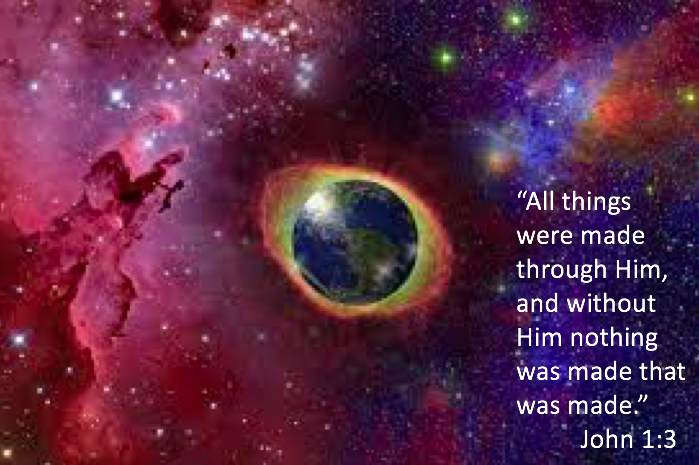 “All things were made through Him, and without Him nothing was made that was made.” John 1:3

I believe in the Big Bang alright. God spoke (BOOM) and the universe came into being (Genesis 1). Through Him all things “were made (1:3),” but He always “was” (1:1). The Creator knows our inner workings better than anyone; He knows our needs and what it will take to bring us to Himself.

A doctor had hired a new secretary. She was pretty and thin. Part of her responsibilities was mailing out the bills to all the doctor’s patients. The doctor began to notice that it was taking more time than should be necessary for her to fulfill this task, and so he observed her one day. He discovered that rather than using the wet sponge to seal the envelopes, she was licking each one. This took a long time. The doctor asked her to use the sponge instead of licking each one, but the new secretary said that she would rather do it the other way. The doctor tried all kinds of motivations to try and convince her to do things his way. He tried telling her how much quicker it would be, he told her that her mouth wouldn’t get so dry. He even tried switching the type of envelopes that he used to one of those kind that had nasty-tasting glue. Nothing worked.

One day, a patient came to her window to pay her bill and noticed that the secretary was licking the envelopes. She said to her, “Did you know that each envelope has about 1 ½ calories?” The secretary immediately stopped and began using a wet sponge. Sometimes it takes a woman to communicate in a woman’s language.

Likewise, it takes the Creator to communicate in His creation’s language. The Creator of the Universe loved you and me so much that He became a Man without ceasing to be fully God (John 1:14) so we could approach Him. Jesus came to us to speak our language so we could understand Him. Christ spoke to us with love when He took our place and punishment on the cross for our sins (cf. Romans 5:8) and rose from the dead (I Corinthians 15:4-6).

Imagine how He felt as He inhaled the air He created and walked by the Sea of Galilee that He had made. As He ate the fish He spoke into existence and spent time with the people He had created, how must He have felt when no one thanked Him for the air they breathed and the Sea that provided their food and livelihood? It must have hurt for Him to go unrecognized. But it gets worse.

“He came to His own, and His own did not receive Him” (John 1:11). Not only was the Creator ignored by the world in general, He was rejected by His own Jewish people. Unlike the world, the nation of Israel knew He was here, but like the world they didn’t care. They turned away from their Creator and Messiah. No doubt this deeply hurt the Lord Jesus. But did He give up on the world and the nation of Israel? Does He give up on us when we ignore Him or turn away from Him?

Even though the world did not know Jesus as its Creator (1:10) and His own Jewish people rejected Him as their Messiah-God (1:11), Christ did not stop loving them. He still offers salvation to individual Gentiles and Jews who would receive Him by believing in His name. “But as many as received Him, to them He gave the right to become children of God, to those who believe in His name” (John 1:12). Notice that the way to receive Christ is to “believe in His name.” In New Testament times, a name represented a person. Jesus Christ is the One who died for our sins and rose again. The moment you believe or trust in Jesus alone to make you God’s child, you are born into God’s family forever.

Please understand that when the Bible says you must receive and believe in Christ, that does not mean you must simply accept Him as a Person like you would accept me as a person. Accepting me as a person will not get you to heaven. Accepting as history that Jesus existed, died and rose again will not get you to heaven. Some people accept Christ’s death and resurrection as an historical fact but are still trusting in their own works to get them to heaven.

Picture a large boat filled with refugees from Cambodia coming across the Pacific Ocean. It begins taking on water and lifeboats become a necessity. Three passengers find themselves in different situations. The first passenger has no knowledge that lifeboats save and, therefore, never steps into one. The second passenger understands that lifeboats save, but for some reason refuses to step into one. The third passenger not only understands the ability of a lifeboat to save, but actually steps into the lifeboat and in so doing relies upon it to keep him from drowning.

Which of the three is saved? Yes, the last passenger. He not only had the knowledge, but he uses it. A person is saved when he or she understands the ability Jesus Christ has to save and acts on that knowledge by trusting Christ alone. You are not saved simply by understanding Christ died and arose or even accepting His death and resurrection as a fact of history while relying on your own good life to get you to heaven. You become a member of God’s family when as a sinner deserving of hell, you trust Christ alone to get you to heaven.

Maybe you have ignored God all of your life like the world did. Perhaps you have turned away from His loving attempts to draw you to Himself much like the nation of Israel did when He walked on the earth. Please understand that Jesus still loves you and offers you a personal relationship with Him forever. All He asks is that you “believe in His name” – His Person – and He will place you in God’s family forever!

Just as Jesus never stopped loving the world or the nation of Israel for rejecting Him, so when non-Christians initially reject the message of the gospel from us, we must not stop loving them or exposing them to the gospel. Christ never stopped loving me the first time I heard and rejected the gospel and I am eternally indebted to Him for that! The least I can do is show the same kind of patient love toward unbelievers who need to hear the gospel more than once before they believe it.

Prayer: Precious Lord Jesus, I bow before You as my Creator God. You know me so intimately and thoroughly because You created me in my mother’s womb. You know me better than anyone, and yet You still love me unconditionally. Thank You for making me, me! Thank You for everything about me. Thank You for never ceasing to love me even though I used to ignore You or even reject any of Your attempts to love me. Because You are my Creator God, You have the power not only to take me to heaven when I die, You also have the power to take care of all of my needs. You have the ability to change me from the inside out as I learn to trust and obey You. Just as You never stopped loving me even though I rejected Your initial attempts to share Your gospel message with me, help me not to give up on those who initially reject my attempts to share Your gospel message with them. Help me to show the same kind of patient love toward others who need to hear the gospel as You have shown to me. In Jesus’ name. Amen.