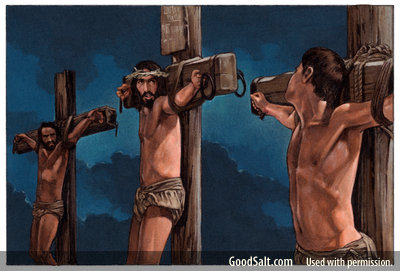 “…Where they crucified Him, and two others with Him, one on either side, and Jesus in the center.” John 19:18

Currently, I am reading a great book by Max Lucado entitled “He Chose the Nails: What God did to win your heart.” In one of the chapters, Lucado asks, “Ever wonder why there were two crosses next to Christ? Why not six or ten? Ever wonder why Jesus was in the center? Why not on the far right or far left? Could it be that the two crosses on the hill symbolize one of God’s greatest gifts? The gift of choice.

This leads us to the fifth lasting lesson that we learn from the last day in Jesus’ life before His dead body is sealed in a tomb. So far in our study, we have discovered the following lessons:

Today we discover that THE TWO CROSSES TEACH THAT GOD GIVES EACH OF US THE FREEDOM TO CHOOSE (JOHN 19:18b). This has been the case throughout human history. When God placed Adam and Eve in the garden, He gave them the freedom to obey or disobey (Genesis 2:8-25), and they chose to disobey (Genesis 3:1-24). And God permitted them.

Abel and Cain were both sons of Adam, but Abel chose to worship God His way with an animal sacrifice and Cain chose his own way (Genesis 4:1-5; cf. Hebrews 11:4). God allowed them to do this.

Abraham and Lot were both travelers in Canaan (Genesis 13). Abraham chose God and Lot chose Sodom. God let them make their own choices.

David and Saul were both kings of Israel (I Samuel 9:1-I Kings 2:11). David chose to follow God and Saul chose to go his own way. And God lets them.

Peter and Judas both deny Jesus. But Peter seeks restoration (John 20:15-17) and Judas seeks death (Matthew 27:5). God permits them to make these choices. 2

Jesus also gave people choices. He gives us the choice of belief or unbelief when He says, “He who believes in Him is not condemned; but he who does not believe is condemned already, because he has not believed in the name of the only begotten Son of God.” (John 3:18).

Christ gives us the choice of eternal life or eternal punishment when He says, “And these will go away into everlasting punishment, but the righteous into eternal life.” (Matthew 25:46). The choice is ours.

One of the two thieves hanging on a cross next to Jesus chose eternal life, but the other thief did not. Luke tells us about this in his account: “39 Then one of the criminals who were hanged blasphemed Him, saying, ‘If You are the Christ, save Yourself and us.’ 40 But the other, answering, rebuked him, saying, ‘Do you not even fear God, seeing you are under the same condemnation? 41 And we indeed justly, for we receive the due reward of our deeds; but this Man has done nothing wrong.’ 42 Then he said to Jesus, ‘Lord, remember me when You come into Your kingdom.’ 43 And Jesus said to him, ‘Assuredly, I say to you, today you will be with Me in Paradise.’ ” Luke 23:39-43

Both these thieves next to Jesus heard and saw the same things, but they reached different conclusions about the Man in the middle of them. The unbelieving criminal hurled insults at Jesus, “If You are the Christ, save Yourself and us.” (23:39b). But the believing criminal recognizes that he and the other thief are guilty of wrongdoing (“Do you not even fear God, seeing you are under the same condemnation? And we indeed justly, for we receive the due reward of our deeds”), but he acknowledges that Jesus “has done nothing wrong” and is about to enter His “kingdom” (23:40-42).

Both these men also differ on what they think they need to be saved from. The unbelieving criminal wants to be saved from his present earthly circumstances (“If You are the Christ, save Yourself and us.” (23:39b). But the other criminal understood there was something far more significant to be delivered from than their present circumstances. Perhaps when he heard Jesus pray, “Father, forgive them, for they do not know what they do” (Luke 23:34), he had a change of heart and placed his saving faith in Christ alone.  So he says to Jesus, “Lord, remember me when You come into Your kingdom.” (23:42). Jesus responds to this man’s faith by saying, “Assuredly, I say to you, today you will be with Me in Paradise.” (23:43).

“And later that day, though his physical body died, his spirit and soul went to paradise with King Jesus, awaiting his future bodily resurrection from the dead. This affirms that believers go immediately into God’s presence at death.” 3

Does Jesus try to persuade the unbelieving thief to change his mind? Wouldn’t a personal invitation be timely for this other criminal? We might think so, but Jesus remains silent. He honors those who have the freedom to choose where they spend eternity.

Granted there are some choices we do not have the freedom to make: where we were born, who our parents are, our own DNA, etc. But where we spend eternity is a choice God has given us to make. Aren’t you glad for that?

Although we know little about the thief who came to faith in Christ on the cross, what we do know is he was deserving of condemnation. He chose the wrong crowd, the wrong morals, and the wrong behavior. But is he spending eternity reaping the fruit of his rebellious life? No, the exact opposite. He is reaping the fruit of one good choice he made hanging on a cross next to Jesus Christ.

You and I have made some terrible choices in life, haven’t we? Perhaps we have chosen the wrong crowd, the wrong morals, and the wrong behavior. We may look back over our lives and conclude, “If only I could take back those awful decisions.” You can’t take them back, but you can offset them. 4

Notice that this believing criminal did not have the opportunity to get baptized, or live a life of obedience to Christ as His disciple when he got saved on that cross. But he did do what is required of any person to be saved from eternal punishment: he believed in Jesus to save him (John 3:16; Acts 16:31). ﻿And one believing choice for eternity offsets a million bad ones on earth. The choice is yours.

Prayer: Lord Jesus, thank You for the two crosses next to You on Golgotha that remind us that You have given us the freedom to choose. Why people choose differently about eternity, I do not know. But what I do know, is that You love those who believe in You enough to give them everlasting life. And when others do not believe in You, You love them enough to permit them. Please enable us by Your Spirit and Your truth to make God-honoring decisions that bring You more glory. In Your precious name we pray, Lord Jesus. Amen.