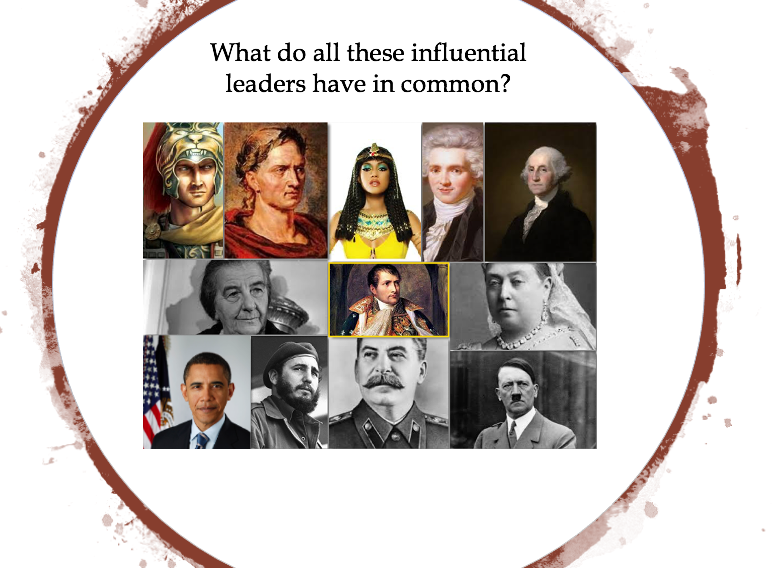 Do you know what Alexander the Great, Julius Caesar, Cleopatra, Robespierre, George Washington, Napoleon, Queen Victoria, Golda Meir, Hitler, Stalin, Fidel Castro, and Barack Obama all have in common? The answer is quite simple: They are all orphans. This is the conclusion of a study done by Dr. Pierre Rentchnick in a book entitled, “Do Orphans Lead the World?” 1

After surveying the lives of three hundred leaders who have had a great impact on world history, he discovered that all these leaders had grown up as orphans – either actually, through the death or separation from parents, or emotionally, as a result of severe childhood deprivation. “He concluded that what many would consider emotional deprivation may arouse an exceptional willpower which can be turned to either good or evil.” 2

Today psychologists are giving lectures on how important it is for a child’s development to have a father and a mother performing harmoniously together their respective roles towards their child, and we find this study which shows that some of the most influential people in world history never had healthy relations with their parents.

Paul Tournier, the Swiss physician and counselor, who was also an orphan, was intrigued by Rentchnick’s study, and so he took up the study and realized that many of the most influential religious leaders were also virtual orphans. 3  In his book, Creative Suffering, Tournier states that circumstances are morally neutral, whether fortunate or unfortunate. They simply are what they are; what matters is how we respond to them. 4

Good and evil, in the moral sense, do not reside in things, but they always reside in persons. Rarely are we in control of events which cause suffering. But we can control how we respond to suffering. By God’s grace, we can respond positively, creatively, and see suffering as an opportunity to learn and grow. Or we can respond negatively and stunt our growth.

In John 16:16-24, Jesus used the analogy of a woman in the labor of childbirth to teach how He could transform the disciples’ grief over His death into gladness at His resurrection (John 16:16-24). In John 16:25-33, Jesus wants to teach us how to face challenges with courage.

First, we are to RESOLVE TO GO DIRECTLY TO THE FATHER IN PRAYER (16:25-26). Jesus said to His disciples, “These things I have spoken to you in figurative language; but the time is coming when I will no longer speak to you in figurative language, but I will tell you plainly about the Father.” (John 16:25). The phrase “these things” refers back to what Jesus just said about a woman being in labor (John 16:16-24). When Christ says He spoke to His disciples in “figurative language,” He is referring to dark sayings which conceal some truth. He admits that He has not given direct answers to His disciples’ questions. But He assures them that “the time is coming” after His resurrection when He will no longer speak to them in figurative language. For forty days after His resurrection (cf. Acts 1:3), Christ would speak “plainly about the Father” and that would be reflected in the apostles’ teaching.

Evans writes, “There is a principle at work here for believers in Christ: God only explains what you are ready and able to handle. You may not understand the circumstances that you’re experiencing, but God loves you and is taking you through a growth process. He calls for your trust and obedience now. Further understanding will come later, when you’re prepared to receive it.” 5

This does not mean Jesus would never intercede in heaven for His disciples because the Bible tells us that Christ intercedes for all believers (Romans 8:34; Hebrews 7:25; 9:24). What He probably means is that they are not to look to Jesus only to meet their needs, but to the Father also. 6 The verb “ask” (aitēsesthe) is in the middle voice and means to ask for one’s self a favor from God. It is not wrong to ask God to meet your own needs. The disciples could pray directly to the Father because of Jesus’ finished work on the cross which provided direct access into the presence of God in heaven (cf. Hebrews 10:19-22).

All believers can pray directly to God the Father. This is not a privilege limited to pastors or other church leaders. It is a privilege for all Christians. The Bible tells us, “For through Him we both [Jews and Gentiles] have access by one Spirit to the Father” (Ephesians 2:18).

In Acts 4, the believers of the Jerusalem Church were experiencing opposition to the gospel, so they prayed the Scriptures found in Psalm 2:1-2 (Acts 4:25-26) which describe a future day of rebellion when the nations will gather against Christ under the World Ruler or Beast of Revelation (cf. Revelation 16:13-16; 19:11-21). Do you know how the Lord will respond to their opposition? Psalm 2:4 says, “He who sits in the heavens shall laugh.”

This is like the laughter of a father whose three-year old boasts that he can outrun him or beat him in a wrestling match. The father knows the boundaries of power possessed by his son. Likewise, God knows the boundaries of power among the nations and He is amused by their attempts to overthrow Him. That, my friends, is courage. If God laughs at this spirit of rebellion among all the nations, it would be inappropriate for you and me to be afraid among those who oppose the gospel. God has an abundant supply of courage to give us.

Among those who served in the court of Alexander the Great was a famous philosopher who had outstanding ability but little money. He asked Alexander for financial help and was told he could draw whatever cash he needed from the imperial treasury. When he submitted to the treasurer a request for an amount equal to $50,000, he was promptly refused. The treasurer had to verify that such a large sum was indeed authorized. But when he asked Alexander, the ruler replied, “Pay the money at once. The philosopher has done me a singular honor. By the largeness of his request, he shows that he has understood both my wealth and generosity.”

Believers who exercise great faith by asking God to provide for their needs demonstrate a similar understanding of His vast wealth and generosity. That kind of asking honors God the Father. If we are going to have courage when facing challenges in life, we must learn to go directly to the Father in prayer, knowing that He has an infinite supply of courage and He is eager to give it to those who ask.

Prayer: Heavenly Father, I am so grateful to have direct access into Your throne room in heaven because of the shed blood of Jesus Christ. I can talk to You about anything at any time, knowing that You understand and want to bless me as Your child. I honor You when I ask You to meet my needs abundantly because it reflects that You are a good and generous Father Who delights in blessing His children. Lord God, I ask that You supply Your children with an abundance of boldness to proclaim Christ crucified to a lost and dying world. The world may mock or oppose those of us who proclaim Your gospel message, but we are so thankful to have the honor of serving You as Your ambassadors here on earth. Please use us as You deem best to magnify Your Son. In the powerful name of Jesus Christ we pray. Amen.