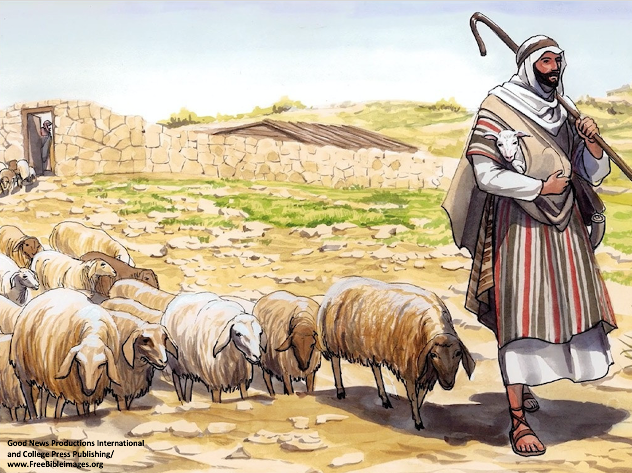 “He calls his own sheep by name and leads them out. And when he brings out his own sheep, he goes before them; and the sheep follow him, for they know his voice.” John 10:3c-4

﻿David Johnson writes, “Both Old and New Testaments warn of false prophets and spiritual systems that add the performance of religious behaviors to the performance of Jesus on the cross as a means to find God’s approval. All of us, as Christians, are told to be on our spiritual guard. Are the spiritual relationships you have bringing the rest Jesus promised, or do you find just more toil and weariness?” 1

If your spiritual relationships have brought more toil and weariness than the rest Jesus promised, then you can probably relate to the fact that much of Israel’s history has been tainted by false shepherds who only cared about themselves and neglected to care for the people God had placed in their care (Ezekiel 34:2-6). In view of Israel’s false shepherds, the Lord promised a True Shepherd who would care for His flock. That Shepherd would be God Himself (Ezekiel 34:11-16).

We are learning that Jesus Christ is that True Shepherd Whom God’s people can trust to care for them in a way that the false shepherds never could. Jesus promises rest and nourishment for His sheep, not more toil and weariness. So far we have learned that we can trust Jesus as our True Shepherd because…

– He has the doorkeeper’s (John the Baptist’s) confirmation (John 10:3a)

Today we discover that we can trust Jesus as our True Shepherd because HE PROVIDES COMPETENT LEADERSHIP (John 10:3c-6). Jesus said concerning the True Shepherd, “3c He calls his own sheep by name and leads them out. 4 And when he brings out his own sheep, he goes before them; and the sheep follow him, for they know his voice.” (John 10:3c-4). The Pharisees cast the healed beggar out of the synagogue, but Jesus led him out of Judaism into His fold.Jesus calls His own sheep by name to “lead them out” of the fold from the other flocks. His sheep follow that familiar voice. They trust that voice.

Christ did not come to work within the Pharisee’s or Sadducee’s religious systems, but rather to separate those who heard His word from those systems because there was no life in them. As He gathered His flock together, “He goes before them”to show them the way in which they ought to go. The shepherd did not drive his sheep from behind with dogs like many shepherds in the Western world do today. Instead, he leads them from the front. The Pharisees tried to drive the people from behind using fear. But Jesus lovingly leads the people to pasture away from danger. Christ did not point people to a way in which He Himself was not walking but rather led His own sheep in the way He intended them to go. Jesus led by example, not by force. Such is the way of the True Shepherd.

You may be facing important decisions and Jesus loves you so much He wants to guide you. Some of you may be saying, “Great! Just what I need! Someone else to push me around or guide me!” Christ enjoys guiding you. He really does. He knows that life is too difficult to be lived on its own and He wants to guide us in our decisions and direction so we can experience His rest and enjoyment, not more toil and weariness. Jesus promised believers, “Take My yoke upon you and learn from Me, for I am gentle and lowly in heart, and you will find rest for your souls. For My yoke is easy and My burden is light.” (Matthew 11:29-30).

The words “yoke” and “learn” suggest a discipleship relationship. What does it mean to take Jesus’ yoke? A yoke is a wooden beam  that attaches two farm animals together. By sharing the load, they lighten the load. They can carry more because they are working together. Who has a stronger back – you or Jesus? Jesus is saying to join up with Him, connect with Him in a discipleship relationship and He will carry the load with you.

But the yoke is also a symbol of control. Farmers used a yoke to control their animals. Oxen yoked together are controlled by their master; when you and I are yoked to Christ we are controlled by Him. When you are yoked together with Christ you move together in the same direction and at the same pace. If you move at the same pace as Christ and in the same direction as Christ, will you have less stress? Absolutely! Who is setting the pace in your life at this time? You? Your boss? Your church? Your pastor? Your culture? That’s why you are overloaded with stress. When we yoke up with Jesus, He determines the pace and direction we are to go and then we will enjoy His promised rest of discipleship.

If you are a Christian, Jesus wants to guide you. He wants to direct you. You can count on His leadings to move you more into His likeness (Romans 8:28-29). He has good plans for you. Plans to prosper you, not to harm you. Hope-filled plans, as the Scripture says: “ ‘For I know the plans I have for you,’ declares the Lord, ‘plans to prosper you and not to harm you, plans to give you hope and a future.’ ” (Jeremiah 29:11 – NIV).  Christ is always seeking to lead us. The question that faces us is are we listening?

Jesus then says, “Yet they will by no means follow a stranger, but will flee from him, for they do not know the voice of strangers.” (John 10:5). While it is the nature of sheep to follow the voice of their shepherd, they will not follow the voice of a stranger even if he dresses alike or uses the same words because his voice is unfamiliar to them. Instead, the sheep flee to safety. In this context, oppressed people under the legalism of the Pharisees were fleeing to Jesus for safety and rest.

Do we run from unfamiliar voices or to them? When you hear teaching that is contrary to Jesus’ teachings, do you run from it or to it? For example, if you hear teaching that says you must bear fruit or produce good works to get to heaven (see John 3:15-16; 4:10-14; Romans 4:5; 6:23; Ephesians 2:8-9), do you embrace it or reject it? If someone says that Jesus is just a good moral teacher or a prophet, but not God (see John 1:1-3, 14-17; Titus 2:13; I John 5:20), do you believe it or dismiss it? When you hear an instructor say that the Bible is full of errors and cannot be trusted (2 Timothy 3:16-17; 2 Peter 1:20-21), do you accept it as true or call it false? How do we discern Jesus’ voice from so many others that fight for our attention? We must know God’s Word so well that false teaching will be obvious to us in contrast to the truth.

“Jesus used this illustration, but they did not understand the things which He spoke to them.” (John 10:6). Many of the unbelieving Jews who heard these words“did not understand” what Jesus was talking about. They did not respond to the Shepherd’s voice because they did not belong to the Shepherd. Their rejection of Jesus’ word did not mean His word was false, rather it meant that they were not His sheep. They could hardly have failed to understand the relationship between shepherds and sheep, which was so common in their culture.

Nevertheless, they did not grasp Jesus’ analogy of Himself as Israel’s true Shepherd because they were spiritually blind. They were more familiar with the lies of their father, the Devil (John 8:44), and his followers who sought “to steal, and to kill, and to destroy” the flock rather than give them life (John 10:10a). The Devil had lied to these Jews about the identity of Jesus and they believed his lies which kept them from believing in Christ as their True Shepherd. This is at the heart of all who reject Jesus Christ. They have been deceived by the father of lies – Satan himself and his followers (cf. 2 Corinthians 4:4; 11:3-4).

Prayer: Lord Jesus, thank You so much for leading me out of performance-based religion which focused more on external rules and behaviors than on the heart. Under such systems, I experienced much toil and weariness instead of the rest You promised to Your followers. Instead of trying to drive me or pressure me from behind using fear, You have provided leadership for me to follow through Your humble and loving example. Please help me to be so familiar with Your voice and teachings that false teachings will be obvious to me in contrast to the truth.Thank You for loving me enough to offer Your guidance and direction to me daily. I am very grateful that I do not have to make decisions in isolation, but I can make decisions based on Your counsel from Your Word and the Holy Spirit’s teaching in my life and in the lives of other brothers and sisters in the family of God. Life is so much better with You, my True Shepherd, guiding me every step of the way. In Your precious name I pray. Amen.