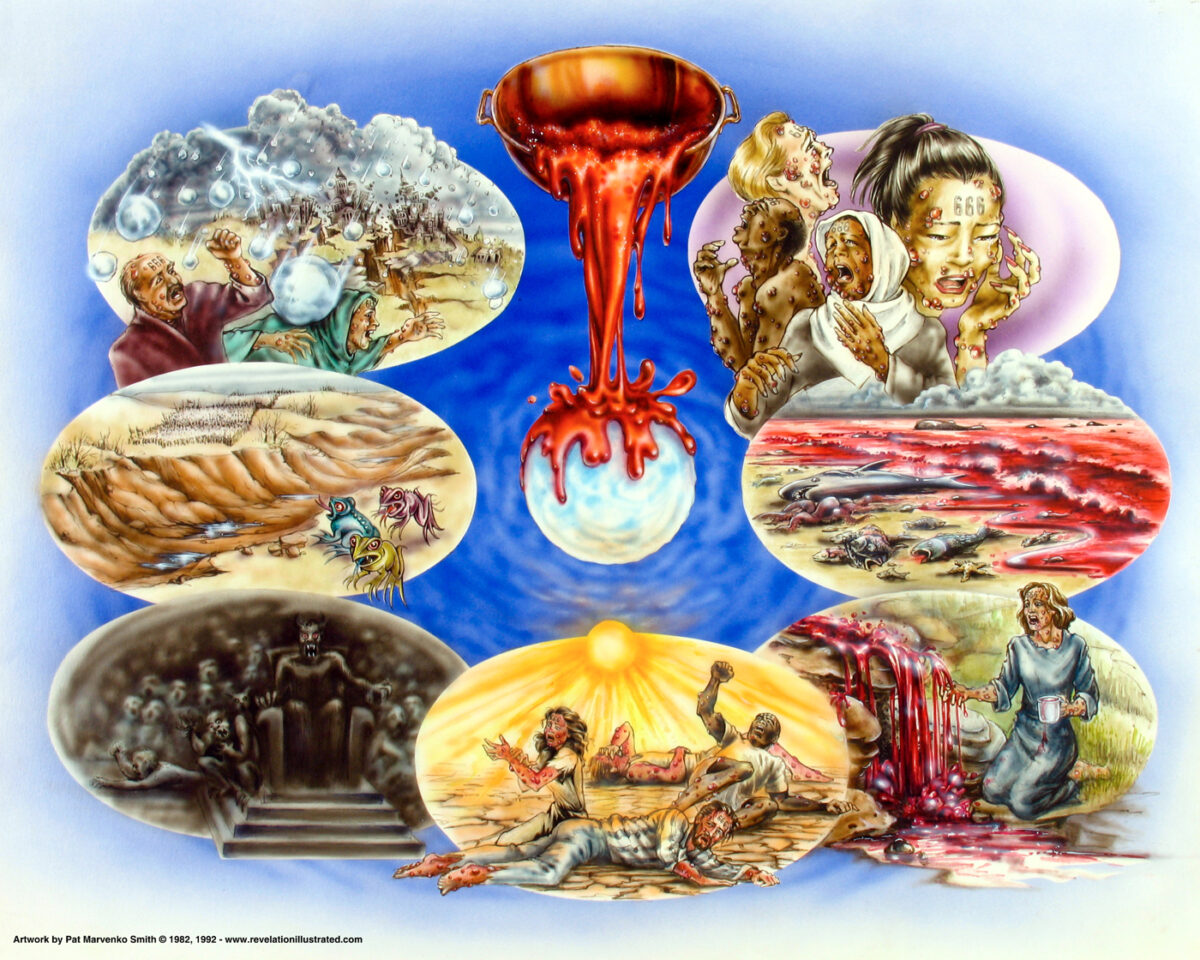 “5 And I heard the angel of the waters saying: ‘You are righteous, the One who is and who was, the Holy One, and who is to be, because You have judged these things. 6 For they have shed the blood of saints and prophets, and You have given them blood to drink. It is their just due.” Revelation 16:5-6

One interpreter suggests that these painful sores are directly related to the mark of the beast they received: “There, on the right hand, a horrible, putrefying, incurable cancer! There on the face, a loathsome, ugly, disfiguring, and agonizing blotch! Men become horrible to look upon and their pains never end.” 2

“It is an awesome thought to consider almost the entire population of the world suffering from a painful malady that nothing can cure. Constant pain affects a person’s disposition so that he finds it difficult to get along with other people. Human relations during that period will certainly be at their worst.” 3

These bowl “judgments are an expression of God’s active wrath on sinners. During the church age, sinners on earth primarily experience God’s passive wrath, in which He lets people face the just consequences of their sin without actively punishing them.” 4

Those who refused to give their allegiance to the beast will not be struck with this first bowl judgment. But the ones who worshiped the beast and received his mark will think initially that they have saved their lives and their families as they watch the Beast and his regime hunt down and kill those dissenting citizens who believe in Jesus. However, with the commencement of the first bowl judgment, these beast-worshippers will start to realize that the tide is turning. They are about to experience the dreadful wrath of God in time and then in the lake of fire for eternity.

“The sea is a great reservoir of life. It is teeming with life, and the salty water is a cathartic for the filth of the earth. However, in this plague, blood is the token of death; the sea becomes a grave of death instead of a womb of life.” 6

Imagine the devastating effect this bowl judgment will have upon the Beast’s economy. With the destruction of all the marine life in the oceans, those in the fishing industry who received the mark of the Beast to buy and sell food, will suffer a crushing blow to their livelihoods.

As these beast-worshippers stagger from these first two bowl judgments, they turn their attention inland toward the fresh water supply of rivers and lakes. Just as they are about to take comfort in the fish supply in these fresh waters, the third angel arrives with his bowl of wrath. “Then the third angel poured out his bowl on the rivers and springs of water, and they became blood.” (Revelation 16:4). All the fresh water supplies “became blood” and therefore were useless to all of humankind. None of the fresh water supplies would be safe to drink. The only place for people on earth to turn for a drink of fresh water would be upward toward the sky, praying for fresh, drinkable rainwater to fall and moisten their parched throats. 7

You may be wondering, “What kind of God would bring such harsh judgments to so many people on the earth? Does humankind deserve this kind of severe judgment?” The angel responsible for the plagues over the waters answers these questions.

Since God is always “righteous” and “just,” His judgments are always an expression of His righteous and just standards. And because God is eternal (“who is and who was, … and who is to be”), He never lowers those standards. We must either meet God’s righteous and just standards ourselves or have a substitute who meets those standards. Since none of us can live up to God’s standards (Romans 3:9-23), God provided a Substitute for us in the Person of Jesus Christ who lived up to God’s standards because He Himself is God. When a person believes in Jesus Christ for His gift of salvation, God imputes His righteous life to that believing person’s account; thus, that person is counted as having met God’s standard (Romans 4:5). Those who refuse to believe in Christ as their Substitute on the cross, will get what they deserve for their decisions and actions. 9

In conclusion, the horrific bowl judgments are God’s just and righteous response toward centuries of rejecting and killing His servants who have proclaimed His gospel message which states that faith alone in Jesus alone is the only way to gain a home in God’s heaven (16:2-7; cf. John 3:16; 14:1-3). Those who blaspheme God for His judgments, will reap what they have sown.

Prayer: Lord God Almighty, we thank You for Your abundant mercy and grace during this church age when people do not experience Your active wrath against their sins. Instead, we face Your passive wrath which gives us over to the just consequences of our sins without You actively punishing us. But You have reminded us in Revelation 16 that Your active wrath is coming against rebellious humankind during the Tribulation period on earth when You will punish people directly for their sins. This will be a time of horrific agony and suffering unlike any other time in human history. No one around Your throne in heaven will question or doubt Your righteousness or goodness during this time. But on earth, peoples’ lives will be torn apart, and their only recourse will be to look upward toward heaven to obtain Your mercy through the Lord Jesus Christ. O Lord God, please give us all an abundance of mercy now through Jesus. None of us can live up to Your righteous and holy standards. Even so, thank You for providing Christ as our Substitute Who lived up to Your standards so we who believe in Him receive Your gift of righteousness and are counted as having met Your standards. We need You precious Lord. This world needs You. Use us to proclaim Your forgiving mercy to those whom You have prepared to hear and believe the gospel of Christ. In Jesus’ merciful name, we pray. Amen.

“I beseech you therefore, brethren, by the mercies of God, that you present your bodies a living sacrifice, holy, acceptable to God, which is your reasonable service.” Romans 12:1

…the apostle Paul challenges his readers to live a life of surrender (“present your bodies a living sacrifice”) to God (12:1) by being “transformed” from the inside out “by the renewing of” their minds through the Word of God and the Holy Spirit (12:2a; 8:9-11; 15:4) so they may please God by doing His “will” (12:2b). This spiritual transformation will enable them to serve God through the loving use of their spiritual gifts in the body of Christ (12:3-21).

God’s mercy does not minimize service. God’s mercy maximizes service! When we understand and experience the depths of God’s mercy toward us, we will want to surrender our entires lives to Him as a way of saying, “Thank You, Lord, for being so merciful to me when You saved me from sin’s penalty the moment I believed in Your Son, Jesus Christ (Romans 1:1-5:10a; cf. Titus 3:5-7). Thank You for showing mercy to me when You gave me Your Holy Spirit Who raised You from the dead to empower me to be saved from the power of sin in my Christian life (Romans 6:1-8:39). Even though I do not understand Your wisdom and ways (Romans 9:1-11:36), I do want to surrender my entire being to You for Your use and glory (12:1). I no longer want to be conformed to this wicked world, but I want You to transform me into the likeness of Your Son as I learn to yield to the Holy Spirit and to the holy Scriptures (12:2). Use me in any way You choose to lovingly build up Your church for Your glory (12:3-21).”