This is the fifth video in a series entitled, “Real Solutions to Real Problems.” In this presentation you will learn from the Bible several transforming principles for overcoming condemnation.

All Scriptures are from the New King James Version Bible unless otherwise noted. Digital images areused with permission from Arabs for Christ / FreeBibleimages.org, Goodsalt.com, Good News Productions International and College Press Publishing, LumoProject.com, or they are creative common licenses. 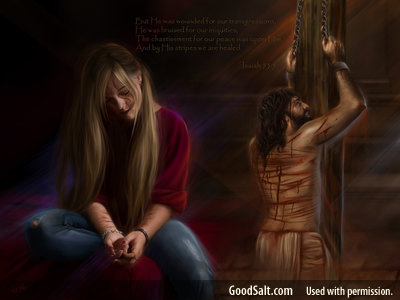 A question that may arise during this pandemic is, “Will a believer in Jesus Christ who commits suicide still go to heaven?” The answer to this is strongly related to one’s view of God’s grace.

WHAT DOES GOD SAY ABOUT A BELIEVER WHO COMMITS SUICIDE?

In Romans 8:31-39, God answers four questions or accusations that can arise in cases of suicide:

1.MAN’S ACCUSATION: “Doesn’t such a death as suicide prove that God works against us, not for us? Isn’t this what prompts a believer to take his life?”

GOD’S ANSWER: “What then shall we say to these things? If God is for us, who can be against us? He who did not spare His own Son, but delivered Him up for us all, how shall He not with Him also freely give us all things?” (Romans 8:31-32) God says, “Since I am for you (and no one is greater than Me), no one can successfully oppose you, including yourself.” When the unexpected happens, you need to ignore the lie that God is against you. He is on your side. God does not work against us. How wrong it would be to believe that God turns His back on the believer who commits suicide. God is FOR US – on our side – deeply interested in our needs, our hurts, our pain, our failures and loneliness.

Proof of this: God gave His Son to die for our sins, including the sin of suicide (Romans 8:32).

2. MAN’S ACCUSATION: “Doesn’t the suicide of a Christian confirm the fact that Christianity really doesn’t have the solutions to man’s problems?”

GOD’S ANSWER: “Who shall bring a charge against God’s elect? It is God who justifies.” (Romans 8:33) God says, “No one can successfully press charges against a believer in Christ because I have declared him totally righteous on the basis of his faith in My Son.” No one can successfully accuse any Christian who commits suicide because God does not even accuse him – He declares him totally righteous or not guilty the moment he believed in Jesus Christ. No one can bring an accusation against the Christian who commits suicide that will stand. But how difficult it is at times to realize God’s interest and presence! It’s like the sun – every day – it shines. No one could EVER say – the sun isn’t shining! We may say, “I can’t feel it or see it”…but fly high enough and there it is!

3. MAN’S ACCUSATION: “Doesn’t such an act as suicide deserve condemnation?”

GOD’S ANSWER: “Who is he who condemns? It is Christ who died, and furthermore is also risen, who is even at the right hand of God, who also makes intercession for us.” (Romans 8:34) God says, “No one can successfully condemn the believer who commits suicide because My Son –

“… is at My right hand defending him against all accusations (8:34d).” When Satan comes to God’s throne with accusations against the believer who commits suicide, God looks to His Son, and Jesus says, “Father, I paid for that sin.”

Now let me make something quite clear. I am not suggesting that such a death is condoned in Scriptures… for God assures us that He has not only designed LIFE but LIFE MORE ABUNDANTLY for His children (John 10:10). However, the struggles and pain are often too great for a person who commits suicide. But God does not condemn him because Christ has taken his or her punishment.

4. MAN’S ACCUSATION: “Doesn’t such an act separate a person from God’s love and presence? Isn’t this the classic act of rejection?”

GOD’S ANSWER: “Who shall separate us from the love of Christ? Shall tribulation, or distress, or persecution, or famine, or nakedness, or peril, or sword? …Yet in all these things we are more than conquerors through Him who loved us. For I am persuaded that neither death nor life, nor angels nor principalities nor powers, nor things present nor things to come, nor height nor depth, nor any other created thing, shall be able to separate us from the love of God which is in Christ Jesus our Lord.” (Romans 8:35-39) Nothing, including suicide, can separate a Christian from the love of God. Even though others may stop loving us or we may stop loving ourselves, God’s love will never abandon us. Nothing you do, say, or think can separate you from God’s love. Absolutely nothing.

Listen to Jesus’ own words: “My sheep hear My voice, and I know them…and I give them eternal life, and they shall never perish; neither shall anyone snatch them out of My hand. My Father, who has given them to Me, is greater than all; and no one is able to snatch them out of My Father’s hand.” (John 10:27-29) That includes the believer who commits suicide!

HOW CAN I OVERCOME THOUGHTS OF SUICIDE?

WHAT IF I SUSPECT SOMEONE I KNOW IS HAVING THOUGHTS OF SUICIDE?