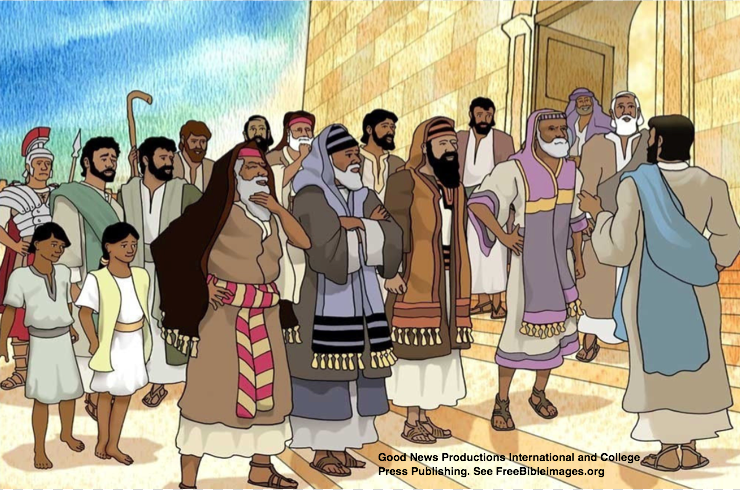 “Therefore the Jews sought all the more to kill Him, because He not only broke the Sabbath, but also said that God was His Father, making Himself equal with God.” John 5:18

In John 5:1-15, we saw that the religious leaders (Pharisees) had watched Jesus heal a man who had been lame for 38 years. They were angered that Jesus had dared to violate the regulations that they had added to the Mosaic laws about the Sabbath. So if Jesus was going to smooth things over, now was the time to do it. But instead of avoiding controversy, Jesus claims to be equal with God the Father. Rather than compromise the truth, Jesus states who He is so that they could either receive Him or reject Him. Look with me now as we discover the first claim Jesus made to establish His equality with God the Father.

The first claim of Christ is that HE IS THE SON (John 5:16-20). “For this reason the Jews persecuted Jesus, and sought to kill Him, because He had done these things on the Sabbath.” (John 5:16). If I had been Jesus at this point, I think I would have run to the hills for safety! But Jesus does not back down, does He? “But Jesus answered them, ‘My Father has been working until now, and I have been working.’ ” (John 5:17). Jesus claims to be imitating His Father’s work, which includes helping people and meeting their needs. So we find that Jesus acts like God and is talking as if He is God. Not only is God the Father, but God is “His Father.” The inference was very clear to the Jewish mind. Since Jesus claims that God is His Father, He is claiming an unprecedented equality with God. For the Jew, there was no more serious offense that could be made.

“Therefore the Jews sought all the more to kill Him, because He not only broke the Sabbath, but also said that God was His Father, making Himself equal with God.” (John 5:18). By saying that God was His Father, He was claiming to be equal with God in nature, privilege, and power. For example, if you say that someone is your father, you are claiming to possess the same human nature as him along with all the other qualities that describe your earthly dad. Likewise, when Jesus claims that God is His Father, He is claiming to possess the same divine nature as God Himself along with all of His other divine attributes. The Jews rightly understood Jesus was claiming to be equal with God. But instead of exercising caution, they were all the more determined to kill Jesus. Does Christ withdraw in order to protect Himself?

“19 Then Jesus answered and said to them, ‘Most assuredly, I say to you, the Son can do nothing of Himself, but what He sees the Father do; for whatever He does, the Son also does in like manner. 20 For the Father loves the Son, and shows Him all things that He Himself does; and He will show Him greater works than these, that you may marvel.’ ” (John 5:19-20). Jesus expresses His dependence upon God the Father. He can only do what He sees His Father doing. Like a Son, He copies His Father. These two verses picture a son learning his father’s trade. He doesn’t act on His own initiative; instead He watches His Father at work and performs each task as His Father would have done.

So when Jesus healed the lame man, He was merely doing what His Father would have done in that situation. Now when Jesus says, “And He will show Him greater works than these” (John 5:20b), you may wonder what could be greater than the healing of this lame man? The “greater works” refer to what Jesus says in verses 21-30. Thus, Christ establishes His claim to be equal with God the Father by claiming to be God’s Son.

Jesus’ dependency upon His Father (John 5:19-20), does not mean He is less than God. Christ is describing His role to the Father, not His nature. There is a difference between one’s role and one’s nature. For example, in the biblical marriage relationship, a husband and a wife have different roles (Ephesians 5:22-33). Not only that, but a husband has a greater office than a wife. As a result, he is the head of the family (Ephesians 5:23). This might be controversial to secular society, but it shouldn’t be to a Christian.

So, in one sense, the husband is greater than the wife because they have different roles. However, in another sense, husbands and wives are equal because they both have the same human nature (Genesis 1:27). They are equal in nature, but unequal in roles.

The marriage relationship is a dim reflection of the Persons in the Godhead. The co-equal, co-eternal Persons of the Trinity are one in divine nature. However, each divine Person has a distinct role in salvation (cf. Ephesians 1:3-14). There is a voluntary submission of roles in the work of redemption. The Son takes on human flesh and submits to the Father in giving His life on the cross.

Lest you doubt what I’m saying, listen to Paul’s words to the Corinthians, “But I want you to understand that the head of every man is Christ, the head of a wife is her husband, and the head of Christ is God” (1 Corinthians 11:3). Here Paul takes the same submission language of a wife to her husband and applies it to the Son and the Father.

If we want to truly understand who Jesus is, then we need to look at all of what Scripture says. Those who deny the deity of Christ read the Bible with one eye closed. They only look at isolated verses here and there and must ignore and distort clear passages that teach the deity of Christ. However, all of Scripture must be consulted if we are going to have an accurate portrait of Jesus. And when we read the Bible with both eyes open, we see the incarnate Christ as equal to the Father in His deity (John 1:1; 5:16-30; 10:30-33; Titus 2:13; Hebrews 1:8; I John 5:20), but also in submission to the Father in His role (John 5:19-20; I Corinthians 11:3; 15:27-28).

Prayer: Lord Jesus, I come to You now acknowledging that You are God’s only perfect Son, possessing the same divine nature as God the Father. Because You are God, I ask You to forgive me for the many times I have made my own plans and asked You to bless them. Today, I am asking You to reveal to me where You are working so I may adjust to You and join You in Your work. Thank You for hearing my prayer my Lord and my God. In Jesus’ name. Amen.