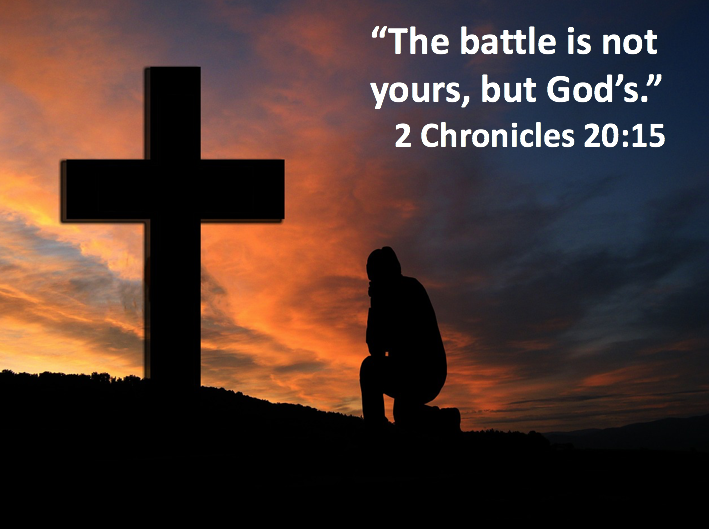 “15 Thus says the Lord to you: ‘Do not be afraid nor dismayed because of this great multitude, for the battle is not yours, but God’s… 17 You will not need to fight in this battle. Position yourselves, stand still and see the salvation of the Lord, who is with you, O Judah and Jerusalem!’ Do not fear or be dismayed; tomorrow go out against them, for the Lord is with you.” 2 Chronicles 2o:15, 17

When King Jehoshaphat and Judah were surrounded by a great multitude of enemies from Ammon and Moab and others with them in what seemed to be certain defeat, Jehoshaphat “set himself to seek the Lord and proclaimed a fast throughout all Judah” and all the people “came to seek the Lord” (20:3-4). As Jehoshaphat turned to the Lord in prayer, he focused on the supremacy and ability of God to meet them and deliver them in the midst of their national crisis (20:6-12). He confessed his and Judah’s inability to overcome these great odds against them, yet he said to the Lord, “but our eyes are upon You” (20:12b).

The Lord told the king and all of Judah not to “be afraid” because “the battle is not yours, but God’s” (20:15). God assured them that they would “not need to fight in this battle” (20:17a) because it was His. Their responsibility was to “position themselves, stand still and see the salvation of the Lord, who is with you” (20:17b). God’s responsibility was to do the fighting in this battle.

Has God ever lost a battle? No, of course not! He never loses. He has a 100% success rate. He bats a 1000. He always wins when He fights against an enemy. The question is, “Will we let Him fight for us?” Will we turn the battle we are facing over to Him?

How did Jehoshaphat position the people to watch God fight for them? Instead of taking up military weapons, he put the choir in front of his army to “sing to the Lord, and … praise the beauty of holiness, …saying: ‘Praise the Lord, for His mercy endures forever’ ” (20:21). As they sang praises to the Lord, “the LORD set ambushes against the people” who came against them and “they were defeated” (20:22). When God heard their praise in the midst of this crisis, He responded to their circumstances and brought them victory.

The Lord says to lay down your weapons (e.g. your anger, clever words, manipulation, obsessing, running, worrying, etc.) and trust Him to fight this battle for you. Put yourself in a position to see God work. Instead of trying harder, be still and trust Him to work on your behalf. Instead of working harder, watch Him fight for you. He is already at work to bring victory.

Then praise Him for what He will do. You may say,“I will praise God after He answers my prayer.” If you wait to praise God until after He answers, is that faith? No. Anyone can thank God after the fact. Faith is thanking God in advance, praising Him in advance that the odds will be overcome, that the solution will arrive, that the miracle will take place. When we start to thank God in advance for what He is going to do, we are going to see some very amazing things happen.

Prayer: Almighty God, I want to acknowledge that the battles I am facing right now are far beyond my ability to overcome them. Right now I want to tune into You, Lord, and see these battles from Your point of view. I know that nothing is impossible with You. You have helped me so much in the past and now I am trusting You to help me now. I am handing these battles over to You to fight. They are now Yours, not mine. I am laying down my weapons and trusting You to win this battle for me. Much of the battle is within me. I am my biggest problem. Please change me wherever You need to. Lord Jesus, I want to thank You in advance for the victory You are going to win. Thank You that I can trust You to do what I never could. In Jesus’ name. Amen.