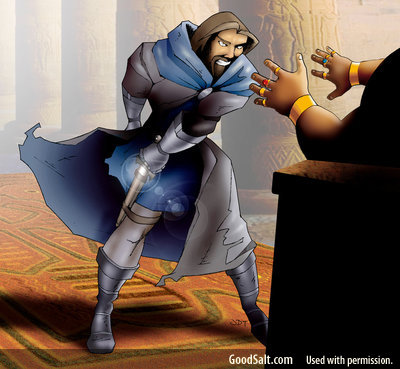 “But when the children of Israel cried out to the Lord, the Lord raised up a deliverer for them: Ehud the son of Gera, the Benjamite, a left-handed man… Now Ehud made himself a dagger (it was double-edged and a cubit in length) and fastened it under his clothes on his right thigh.” Judges 3:15-16

After Joshua died, Israel started to compromise their commitment to drive out the inhabitants of the land of Canaan (Judges 1:21-36). And so began the following cycle: departure from the Lord, discipline by Israel’s enemies, the Lord has pity when His people cry for help, God raises up a deliverer (judge) who defeats their enemies, their deliverer dies, and Israel returns to the false gods of the pagan inhabitants of the land (Judges 2:11-19).

One such deliverer that God raised up was a “left-handed man” named “Ehud,” who would deliver Israel from the oppressive rule of “Eglon king of Moab” (Judges 3:12, 15). We are told, “Now Ehud made himself a dagger (it was double-edged and a cubit in length) and fastened it under his clothes on his right thigh” (Judges 3:16). Ehud’s “double-edged” sword was sharp on both sides and would be an effective weapon against Israel’s enemies. The fact that Ehud “fastened” this sword “under his clothes on his right thigh” would make it difficult to be detected.

When Ehud delivered “the tribute to Eglon” who “who was a very fat man,” he “sent away the people who had carried the tribute” and told the king he had “a secret message for” him (Judges 3:17-19a). This prompted the king to send “all who attended him” out of his “private chambers” so he could be alone with Ehud (Judges 3:19a-20a). After Ehud told the king, “I have a message from God for you,” he “arose from his seat” and took the king completely off guard when he “reached with his left hand, took the dagger from his right thigh, and thrust it into his belly” (Judges 3:20b-21). After killing king Eglon, Ehud led the tribe of Ephraim to victory over the Moabites and Israel enjoyed “rest” in “the land…for eighty years” (Judges 3:25-30).

It is important not to miss the fact that God not only providentially moves in the course of history to accomplish major events, but He also uses a string of little things like a “left-handed” man who wears his “double-edged sword… under his clothes on his right thigh” to bring about those major events.

God uses little things to make big things happen. Like when a team of six short-term American missionaries and six Filipino evangelists went to a spiritually dark island called Dinagat in the southern Philippines in January of 2012. After arriving on the island which had a reputation for driving missionaries off the island or even poisoning them, one of the older mission team members began to preach the gospel outside a marketplace. An older woman said the Americans on the mission team fulfilled an ancient prophecy on the island which spoke of white-skinned people coming to the island and bringing many blessings.

As result, the Lord opened up many doors, including a radio/television station, for the gospel to spread throughout the island. The Lord used the skin color of a small team of American missionaries to help spread the gospel throughout the island. Let us not forget that God can string together little things (e.g. the color of your skin, your left-handedness, the size of your nose, your love for fish, etc.) to make big things happen for His glory.

Prayer: Lord God, thank You for reminding us that You can use little things in our lives to make big things happen for Your glory. Help us to pay attention to how You fit together the little things to make major events take place. You can use our looks, mannerisms, and interests to advance Your gospel message in a world that is becoming increasingly dark without Christ. We surrender all we have to You for Your glory. In the matchless name of Jesus Christ we pray. Amen.