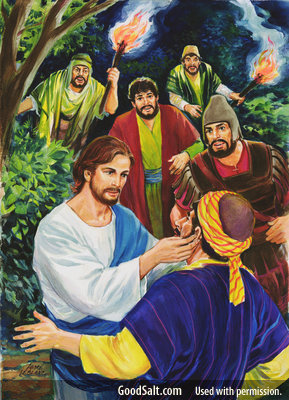 “…That the saying might be fulfilled which He spoke, ‘Of those whom You gave Me I have lost none.’ ” John 18:9

In a world that seems to be increasingly filled with evil, it is important for us to seek God’s wisdom and protection. We are reminded of this today in John 18:9-11. In the first twelve verses of John 18, we are learning how to endure difficult times. So far we have discovered we can do this when we…

After Jesus commanded the well-armed army that came to arrest Him to let His disciples go their way (John 18:8b), John informs us that this fulfilled what Jesus spoke earlier in John 17:12: “that the saying might be fulfilled which He spoke, ‘Of those whom You gave Me I have lost none.’ ” (John 18:9). In John 17:12, Jesus affirmed that none of His disciples were spiritually lost, except Judas, but here Christ is talking about not having lost any of His disciples physically. 1  Jesus wants to make sure His disciples would be safe before His captors lead Him away. Some suggest that this is a preview of Jesus’ substitutionary work on the cross. 2  Christ preserved the lives of His disciples as He laid down His own life on their behalf.

Christ’s ability to keep His disciples physically safe in this dangerous situation validates His promise to keep them spiritually safe for eternity. If Jesus had failed to keep His disciples physically safe, His promise in John 10:28-29 would be empty and unfulfilled. 3  If Christ could not protect His disciples against the Roman soldiers and temple guards, how could He protect them from greater spiritual forces who would threaten to snatch them out of His hands eternally!?! Knowing that Christ has the ability to protect us physically in this life and eternally in the life to come, teaches us the fifth way to endure difficult times – LET CHRIST PROTECT US NOW (John 18:9-11).

Christ’s protection in this circumstance is even more amazing when we look at what happens next. “Then Simon Peter, having a sword, drew it and struck the high priest’s servant, and cut off his right ear. The servant’s name was Malchus.” (John 18:10). Peter had promised He would die for the Lord earlier (John 13:37), and now he senses Jesus is in danger and he courageously comes to His defense. Peter draws “a sword” (machairan), which is a ceremonial dagger used to prepare the Passover lambs earlier 4  and strikes the high priest’s servant, cutting “off his right ear.” John is the only gospel writer who mentions the names of “Peter” and “Malchus” in this circumstance, which underscores the nature of his eyewitness account.

Peter’s actions show that he did not understand that it was necessary for Jesus to die in their place. Peter and the other ten disciples had already believed in Christ for everlasting life (John 2:11; 13:10-11; 17:12), but they did not understand how Jesus could give them eternal life (John 2:11; 13:10-11; 17:12). They did not realize He had to pay for their sin debt in full by dying in their place on the cross and rising from the dead in order to freely give them eternal life.

It must have been a very tense moment when Malchus’ ear dropped to the ground and Peter, the fisherman, stood there facing this army with a bloody knife. Somebody needed to stop Peter before he gets himself and the other disciples killed. But it is not the army nor the army’s commander who stops Peter. It is Jesus. “So Jesus said to Peter, ‘Put your sword into the sheath. Shall I not drink the cup which My Father has given Me?’ ” (John 18:11). Jesus stopped Peter from attacking the rest of the army by telling him to put his “sword into the sheath.” Jesus reminds Peter and the other disciples that His arrest, trials, and death were all part of “the cup” of wrath and judgment His “Father has given” Him to drink. One writer puts it this way, “Peter had a sword in his hand, but our Lord had a cup in His hand. Peter was resisting God’s will but the Savior was accepting God’s will.” 5

Luke tells us that not only did Jesus command Peter to put the sword away, but He also picked up the ear and put it back on the servant’s head and healed him (Luke 22:51). In His moment of greatest need, Jesus has compassion for one of His enemies and heals his ear. This shows us Who Jesus really is. Even in His arrest Christ is thinking of others. Healing the servant’s ear probably saved Peter’s life. Have you ever cut off somebody’s ear trying to do what’s right for the Lord? I have. We all have. We may resist God’s will thinking that we have a better plan to deal with things than the Lord has. We can so easily try to do what we think is right and in our zeal, we do the wrong thing. Yet Jesus is there to heal and protect. Do we deserve this? No, of course not. None of us deserve His grace. But that is why it is grace – undeserved favor from our Lord.

Think of how different our lives would be if we turned to the Lord for the protection we need instead of to substitutes which always seem to disappoint us. Only the Lord can protect us at all times. Let’s look to Him for protection twenty-four hours a day, three hundred sixty-five days a year.

Prayer: Lord Jesus, thank You for showing us in the Garden of Gethsemane how able You are to not only keep us safe from physical dangers in this world that is filled with evil, but spiritually safe for eternity after we believe in You alone for Your gift of everlasting life. Like Peter, we can try to take things into our own hands thinking that we have a better plan than You do, only to make matters worse. Thank You for giving us grace during those times which is often manifested by bringing healing and restoration to relationships that we have damaged. Thank You for the many times You have intervened in our lives to save us from ourselves and the foolish decisions we have made. Lord, only You can protect us at all times. Help us to turn to You for the protection we need instead of to substitutes which in the end always seem to disappoint us. Please enable us to make wise decisions that lead us down the path You want us to take. Thank You in advance for hearing our prayers. In Your safekeeping name we pray. Amen.