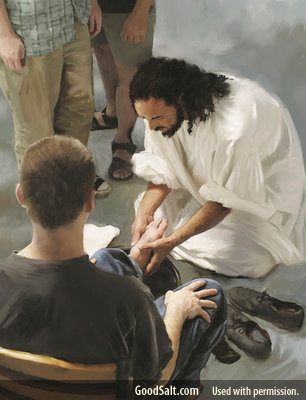 “Jesus, knowing that the Father had given all things into His hands, and that He had come from God and was going to God, rose from supper and laid aside His garments, took a towel and girded Himself.” John 13:3-4

Jesus is in the final week of His life before His crucifixion. It is Thursday, our time. We are learning in John 13 how to experience the blessedness of clean feet or intimacy with Jesus Christ. Last time we saw that we are to recognize Jesus’ loyal love for us (John 13:1-2). Today we discover we are to RECKON WHO WE ARE IN CHRIST (John 13:3-5; cf. Ephesians 2:10).

Jesus “rose from supper and laid aside His garments, took a towel and girded Himself.” (John 13:4). “In Palestine the roads are dusty, and though guests would normally bathe before a social gathering like Passover, after a walk across the city their feet would be dirty. A basin of water and towels were customarily placed at the door of a home for washing. The task of washing guests’ feet was generally assigned to a household servant. A basin of water and towel had been left in the upper room for the disciples’ use, but not one of them took responsibility for washing the others’ feet. They were too busy thinking of themselves to think of others.” 1  The disciples’ refusal to put themselves in the place of a servant reveals their own insecurity.

We are told that Jesus “rose from supper and laid aside His garments.” Pentecost observes that “there are several hints from Scripture concerning the outer clothing which Christ wore. From the record given to us at the Crucifixion, we know that He wore a seamless robe. This would have been an unusually costly robe. Normally robes were made of strips of cloth that had been woven on narrow looms; these strips were sewn together to make a garment of sufficient size to be wrapped around an adult. But the robe that Christ wore had been especially prepared at great cost… We also notice that when Christ during His ministry went into a strange synagogue He was greeted as a rabbi and welcomed in that assembly. A rabbi was normally designated by the color of the tassels or ribbons sewn onto his robe. It may be that Christ wore the robe of a rabbi. Such a robe would have entitled Him to respect and honor. In Israel only the priest was held in higher esteem than the rabbi… It was such a garment as this that Christ laid aside in order to wrap a towel around His waist. A towel was the sign of a servant. A servant had no position and no honor.” 2

Imagine the look of shock on the disciples’ faces when Jesus stood up and laid aside His robe of honor to wrap Himself in a servant’s towel to wash their feet. Yet, even after Jesus took the position of a slave to wash their feet, no one offered to do the task instead. They were too embarrassed or too proud to perform a house servant’s task. This is the extent of Jesus’ love for His own disciples. He is willing to humbly serve them. Humble servanthood is not an expression of weakness. It is actually a show of strength. The more we embrace who we are in Christ and where we are going because of His amazing grace, the more we can serve others from a position of strength and security. This means we must lay aside our robes that entitle us to honor and respect and put on Christ’s love with which to serve others.

“After that, He poured water into a basin and began to wash the disciples’ feet, and to wipe them with the towel with which He was girded.” (John 13:5). The “towel” was long enough to wrap around Jesus’ waist and use the free end to dry His disciples’ feet. This was a tremendous expression of love! Jesus loved them enough to become their servant and minister to them. You would have thought that Jesus needed them to minister to Him as He faced the cross. Instead, we see Him reaching out to them and meeting their needs. He knew that in a short time they would reject Him, but here He is serving them. What an amazing Savior and Lord we have! The more secure we are in Christ’s love and our identity in Him, the more empowered we will be to serve others.

When Jesus took the position of a lowly household servant, He made Himself extremely vulnerable. He knelt down before men who would betray Him. Among those feet were Judas’ and Peter’s. One man would betray Him and the other would deny Him before the night was over. Still, in love, Jesus knelt down before them. Today, God’s love kneels down before us wherever we are. And as He does, He urges us to bare ourselves before Him, to be vulnerable before Him with our dirty feet (i.e. sinfulness). Jesus’ security and strength to humbly serve these men (John 13:4-5) was based upon His knowing His absolute authority from the Father, His origin, and His destination (John 13:3).

Likewise, as we discover and believe who we are in Christ, we can also make ourselves vulnerable to serve others even when it involves washing dirty feet. The Bible tells us in Ephesians 2:10, “For we are His workmanship, created in Christ Jesus for good works, which God prepared beforehand that we should walk in them.” The word “workmanship” is the Greek word poiēma from which we get our English word “poem.” God has made us a heavenly piece of poetry on this earth. We are His masterpiece, not a mistake. The more we see ourselves as He sees us, the more we can “walk in the good works, which God prepared beforehand.” You and I are not defined by our sin and shame, we are defined by God’s view of us recorded in His word. The more we embrace the way God sees us, the more vulnerable we can become in serving one another.

What are the “good works” God has “prepared beforehand” for us to walk in (Ephesians 2:10)? I believe some common “good works” for all Christians to walk in involve going into all the world and preaching the gospel to everyone (Mark 16:15) and making disciples or followers of Christ by baptizing those who believe in Jesus and teaching them to obey all of Christ’s commands (Matthew 28:19-20). Christ’s gives all Christians the “authority” to do these works for His glory (Matthew 28:18).

Do you want to experience the blessedness of clean feet or intimacy with Christ? Then recognize Jesus’ loyal love for you and reckon who you are in Christ. When you do, you will be in a position to humbly serve our Lord by serving others. The world could use a lot more of this right now.

Prayer: Lord Jesus, what a beautiful picture of Your love when You got up from the table and made Yourself extremely vulnerable by taking the position of a lowly household servant to wash the dirty feet of Your disciples who should have been washing Your feet. Even though they would eventually abandon You in Your darkest hour, You chose not to abandon them. Lord, none of us deserve this loyal and unlimited love from You. But we gratefully receive it because we need cleansing from our own sin and shame. Thank You so much for meeting us where we are at. Please help us to see ourselves through Your eyes so we can serve others from a position of strength and security. We have been given Your authority to represent You on earth as Your ambassadors (Matthew 28:18; 2 Corinthians 5:20). We have been entrusted with Your gospel message to boldly share it with a lost world (Mark 16:15) and then make disciples of those who believe in You (Matthew 28:19-20). Because You made Yourself vulnerable for us, we can now make ourselves vulnerable for others. We love You, our Lord and our God. In Your gracious and loving name we pray. Amen.