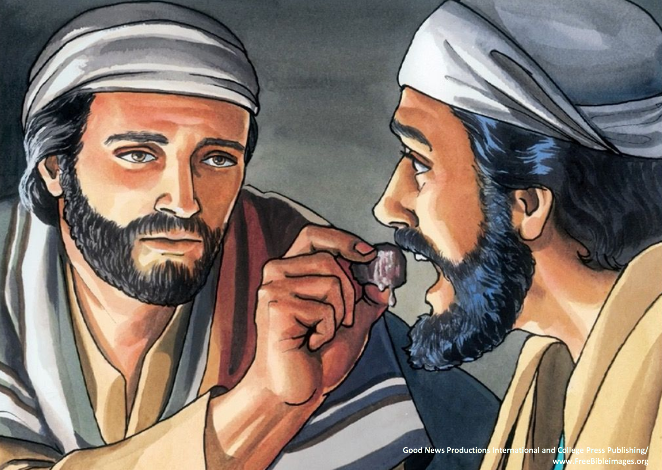 “Jesus answered, ‘It is he to whom I shall give a piece of bread when I have dipped it.’ And having dipped the bread, He gave it to Judas Iscariot, the son of Simon.” John 13:26

Before we address the next way to overcome rejection, it is important to understand the cultural situation. “In first-century Palestine the triclinium was coming into use. A triclinium was a low, rectangular dining table around which couches were arranged on three of the four sides. The fourth side, the ‘foot’ of the table, was left open so that food could be served. Guests would eat in a reclining position around the table. A cushion would be provided for the left arm. The right arm would then be free to reach for food on the low table. Of the three positions around the table, the middle position (opposite the ‘foot’ of the table) was regarded as the most honorable. It was here at the ‘head’ of the table that the principal guests would recline.” 1  Laney writes, “It is safe to assume that Jesus would be situated at the head of the table as the principal guest. To His right and left were the principal places of honor (cf. Mark 10:35-37). To His right, in the place of special honor reclined the apostle John (John 13:23) On His left, in the next highest place, was Judas, the betrayer (13:26).” 2

With this in mind, we are prepared to look at the fifth way to recover from rejection: LEAN ON JESUS FOR HIS POWER TO FORGIVE (John 13:22-26). After Jesus announced to His disciples that one of them would betray Him (John 13:21), we read, “Then the disciples looked at one another, perplexed about whom He spoke.” (John 13:22). Jesus’ announcement about His betrayer took the disciples by surprise. They could not imagine any of them betraying the Lord. No one suspected Judas. He had covered his tracks very well.

John experienced an intimacy with Christ that arose through his obedience to Christ. He writes later that those who are closer to the Lord through obedience, receive a special intimate love from Him: “He who has My commandments and keeps them, it is he who loves Me. And he who loves Me will be loved by My Father, and I will love him and manifest Myself to him.” (John 14:21). There is a sense in which John is closer to Jesus through obedience and this can be seen in his writings. When we obey the Lord Jesus, He discloses more of Himself to us, including His love.

“Simon Peter therefore motioned to him to ask who it was of whom He spoke.” (John 13:24). Peter was overcome with curiosity to know the identity of Jesus’ betrayer. Maybe Peter’s loyalty to Christ was coming out now and he wanted to take preventive measures. Luke 22:38 says Peter had access to two swords. John and Judas were reclining next to Jesus, but Peter’s position at the table was not close enough to Jesus to ask Him privately, so he asked John to ask Jesus to identify the traitor.

“Jesus answered, ‘It is he to whom I shall give a piece of bread when I have dipped it.’ And having dipped the bread, He gave it to Judas Iscariot, the son of Simon.” (John 13:26). Christ tells John that He will identify His betrayer by giving him “a piece of bread”that He has “dipped.” “The dipping of a piece of bread was a significant part of the Passover ritual. In the course of the paschal meal, the master of the feast would pick up some unleavened bread, which was a flat cake. He would put bits of lamb on the piece of bread, sprinkle some bitter herbs on it, and then roll it. Then he would dip the bread containing the meat and herbs into a bitter sauce. This bread would then be handed to a guest. The ritual would be repeated until a piece of bread had been provided for each guest…

“The lamb anticipated God’s Lamb, who would provide God’s salvation for sinners. In preparing the bread with the meat and herbs dipped in sauce, the master of the feast was reminding the participants of God’s promise to provide salvation. In receiving the piece of bread, each participant acknowledged his sin. Each also reaffirmed his faith in God’s promises that He would send a Messiah to take away sin by the sacrifice of Himself, and each professed his willingness to receive salvation which Messiah would offer…

“It is significant that Christ gave the first piece of bread to Judas Iscariot (John 13:26). It was customary to offer the first piece to the most honored guest at the feast… This was an evidence of the love and the grace of the Lord, who knew what was in Judas’ heart before the seats were assigned around the table. Further it is to be noted that since the giving of the bread was in effect an offer of salvation, Christ was offering forgiveness to Judas if he would accept the offered salvation and put his faith in Him. This was grace exemplified. Perhaps no greater demonstration of the love and the grace of Christ can be found anywhere in Scripture than in this scene, for the One who would be betrayed was offering the betrayer forgiveness of sin if he would accept it.” 3

Even though Jesus had been deeply hurt knowing that Judas would betray Him, He still lovingly offered Judas His forgiveness. Similarly, if we are to recover from rejection by others, we too must offer forgiveness to those who have rejected us. Refusal to forgive others hurts us more than those who reject us. Refusal to forgive our offenders leads to bitterness. And bitterness builds a wall around our lives because no one likes to be around a cynic – someone who is always resentful and complaining.

Jesus wants to teach us to be a better person, not a bitter person. Each of us has a choice as to how we respond to those who reject us. We can choose to focus on our feelings or we can choose to focus on the truth. The truth is we are to be “kind to one another, tenderhearted, forgiving one another, even as God in Christ forgave” us (Ephesian 4:32). Forgiveness keeps our hearts tender and sensitive to the Lord and others. We cannot do this in our own strength. We must lean on Jesus’ power to enable us to forgive those who have deeply hurt us. The moment we choose to obey God and forgive our betrayers, God will supply us with the power to do exactly that. Remember, we also have caused hurt to others by rejecting them. We also have sinned against others, especially God. The more we realize our own need for forgiveness, the more forgiving of others we will become.

It is important to understand that forgiving someone does not mean you trust him or her. You can forgive someone in a moment based upon Christ’s positional forgiveness of you (Ephesians 1:7; 4:32), but trusting that person will take time. Trust must be earned from the person who betrayed or rejected you. For example, a Christian wife is commanded to respect her wayward husband, but she is not commanded to trust him (I Peter 3:1-6). He must earn her trust.

Prayer: Lord Jesus, my heart was deeply touched by Your final offer of grace and forgiveness to Judas the night before Your death on the cross! Even though You knew his actions in advance, You did not stop loving him. I am reminded that all of us are like Judas in that we have betrayed You with our thoughts, our words, and our actions. And all of us, like Judas, desperately need Your forgiveness for all the times we have betrayed you. Thank You for extending Your forgiving grace to me. Please help me to extend this forgiveness to others who have rejected me. I pray Your Spirit will also enable others to forgive me for the wounds I have caused them. In Your precious name I pray. Amen.