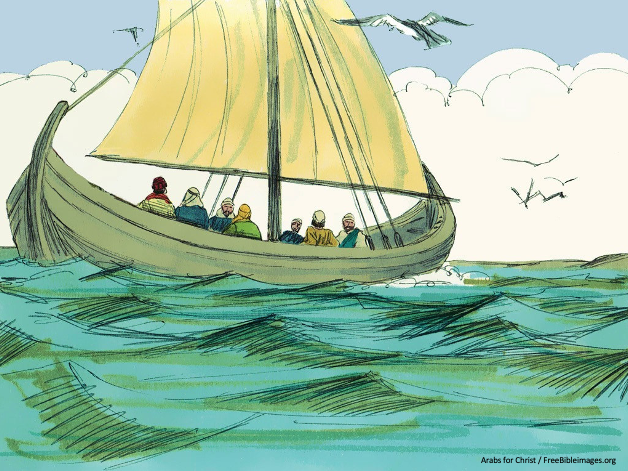 “Simon Peter said to them, ‘I am going fishing.’ They said to him, ‘We are going with you also.’ They went out and immediately got into the boat, and that night they caught nothing.” John 21:3

We are now in the last chapter of the gospel of John. In the first half of this chapter we are going to learn how to relate to the risen Lord Jesus in our daily lives. The disciples are in a much different place than the upper room when they were behind locked doors for fear of the Jews (John 20:19-29). This chapter begins with the disciples back in Galilee. Jesus had commanded the disciples through the women to leave Jerusalem for Galilee where He promised to appear to them (Matthew 28:7, 10; Mark 14:28; 16:7). While waiting for Jesus to come to them, the disciples decided to return to their previous employment.

The apostle John 1 writes, “After these things Jesus showed Himself again to the disciples at the Sea of Tiberias, and in this way He showed Himself.” (John 21:1). This is the fourth resurrection appearance of Jesus in John’s gospel. “The Sea of Tiberias” is another name for the Sea of Galilee. The name “Tiberias” was associated with the Sea because of the prominent capital city of Galilee by that name on the southwestern shore. 2

John identifies five of the seven disciples who witnessed this resurrection appearance. They included “Simon Peter, Thomas called the Twin, Nathanael of Cana in Galilee, the sons of Zebedee [James and John], and two others of His disciples were together.” (John 21:2). We could refer to the “two others” as UFOC’s – unidentified followers of Christ. John notes that “Nathanael” was from the Galilean village of “Cana” where Jesus changed water into wine. Cana was located about nine miles north of Nazareth, the childhood home of Jesus. 3

﻿Keep in mind that “the disciples had gone to Jerusalem and had experienced a tumultuous series of events: the Triumphal Entry, the expectation of a new kingdom, a betrayal by a trusted friend, near arrest, denial of Jesus by their leader Peter, the agonizing crucifixion of Jesus, the Resurrection, and the manifestations of the risen Lord. Understandably they were confused and unsure of the future.” 4

“Simon Peter said to them, ‘I am going fishing.’ They said to him, ‘We are going with you also.’ They went out and immediately got into the boat, and that night they caught nothing.” (John 21:3). Peter was probably feeling badly at this point because of his three denials of Jesus (cf. John 18:17, 25-27). He probably had a lot of doubts about his future as a follower of Christ. So he goes back to what is most familiar to him – fishing. It is also possible Peter had grown tired of waiting for Jesus to arrive in Galilee. Maybe the sight of fishing boats and the smell of wet fishing nets drying in the sun reminded him of what he left to follow Jesus (cf. Luke 5:11).

So Peter breaks the monotony and takes the lead, saying, “I am going fishing.” His proposal to go fishing was met with an unanimous response from the other disciples, “We are going with you also.”

I believe Peter has been unfairly criticized for returning to his former employment. He and the disciples had done what Jesus commanded by going to Galilee. We know they had to wait for the Lord since He did not meet them directly as they entered Galilee. Peter knew Jesus was coming but he did not want to waste time. Besides, he also had a family to provide for. Peter wasn’t abandoning Jesus, he was just making good use of his time. It was quite a natural and normal thing for these men to do. They were fishermen. Here is a sea, a boat, a net, and the time. What’s the logical thing for fishermen to do? Go out and fish! This was not a sin.

In support of this is the fact that the apostle John usually points out the failures of Peter, but in this case he is silent. Also, Jesus did not condemn or correct them for fishing when He arrived. They were unable to catch fish until Jesus was with them. They didn’t recognize the risen Lord until He performed the miracle. So it was God’s plan for them to fish. God used this fishing experience to enable these disciples to recognize their risen Lord and their mission to be fishers of men.

John tells us, “they went out and immediately got into the boat, and that night they caught nothing.” The disciples fished at night when the fish are actively feeding near the surface. And although the Sea of Galilee was noted for its fishing industry in the time of Jesus, 5  the disciples’ all-night fishing expedition went unrewarded. John reports probably with a smidgeon of painful memory that “they caught nothing.” Any fisherman can relate to the disappointment Peter and the other disciples must have felt that night. They probably started out with a lot of excitement, but all that faded by morning. “Whose idea was this?” they may have grumbled. “It must not be God’s will for us to be out here! Are the fish biting? If they are they must be biting each other!”

The story is told of a psychopath peeping over an asylum wall. He observed a man fishing nearby. He yelled, “Caught anything?” The fisherman replied, “No!” “How long have you been waiting?” “Three hours!” came the fisherman’s reply. “Come inside,” the psychopath said, assuming he must have been crazy to wait three hours without catching any fish. Well, the disciples had waited more than three hours without catching any fish. They were out all night and they must have felt crazy to stay out that long without anything to show for it.

I wonder how many of us feel something similar? We know exactly how the disciples felt. We feel like we are not catching any fish right now. When that starts to happen, life becomes a rut. Frustration starts to set in. When you keep trying to go back to the same thing and make it work, instead of looking ahead to God’s plan, life gets deeper and deeper in this rut. Ruts can be very frustrating places. But the only good thing about a rut is it is very easy to steer once you get into one. You cannot veer one way or the other. You can only go the way the rut goes. But the problem is you lose your sense of purpose. You don’t have to think about what you are doing nor do you have to put any effort into what you are doing. There is no purpose or joy.

All night these seven disciples had to feel the disappointment of being expert fishermen who were unable to catch a thing. No doubt they felt like failures. They were discouraged. If we had asked them at that moment what their purpose was for living, they may have said, “We don’t know right now!” But Jesus still had a purpose for their lives. Jesus had commanded them to go to Galilee and He would meet them there. Even though the disciples were discouraged and feeling like failures, Jesus had not lost sight of His purpose for them.

Like the disciples, when we have failed miserably in an area of strength, we can easily become discouraged and feel like God must not have a purpose for our lives. When this happens, it is important to understand that our feelings are wrong.  God’s Word tells us that He has a constant purpose for our lives and we can trust it more than our feelings. Romans 8:28-29a says, “28 And we know that all things work together for good to those who love God, to those who are the called according to His purpose. 29 For whom He foreknew, He also predestined to be conformed to the image of His Son.” God uses “all things,” including our failures and discouragement, to “work together for good.” What “good” is this referring to? Being “conformed to the image of His Son.”

This leads to our first principle: We all need to learn that FAILURE AND DISCOURAGEMENT ARE OFTEN CONNECTED TO THE RISEN LORD JESUS’ PURPOSE FOR OUR LIVES (John 21:1-3). When it comes to failure and discouragement, they are almost always a part of God’s purpose. We would like to hear that God’s purpose means we will never be discouraged or fail again. But if I told you that, I would be lying.

When we look at the great heroes of the faith in Hebrews 11, we see they all had failures and times of discouragement. For example, after the worldwide flood, Noah got drunk and his son saw his nakedness. Abraham grew tired of waiting for God to give him a son, so he took matters into his own hands. Sarah was unable to bear children, and when God announced that she would have a son, she laughed in unbelief. Jacob was a deceiver, yet God used him and his lineage to bring the Messiah into the world.  Moses kept making up excuses to avoid going back to Pharaoh, but God was still able to use Moses to bring the Israelites out of Egypt. Even though Rahab had a problem with her past, she was used by God to protect the spies. Both Samson and David had a problem with lust, and yet they fulfilled God’s purpose for their lives. All these heroes of the faith tell us not to give up even though we fail and get discouraged.

The Bible compares living the Christian life to running a long distance race in Hebrews 12:1-2. This race requires endurance to finish well for the Lord. God’s purpose for your life is not found in the short sprints of life. His purpose is found in running a marathon. If we are going to run a marathon, it is going to require endurance. There will be ups and downs along the way. That is part of God’s purpose.

Christ used the disciples’ failure to catch fish all night to prepare them for what He was about to do. Their discouragement would soon be transformed into unspeakable joy. And Jesus wants to do the same in our lives.

Prayer: Lord Jesus, some of us are very tired because we have been casting our nets again and again and again with nothing to show for it. We are discouraged and feel like failures. We have lost sight of Your purpose for our lives. Help us not to give up, but to keep pressing on by faith in Your Word which tells us Your purpose has not been lost. You are working behind the scenes in our lives to accomplish Your good will for our lives all for Your glory. In Your mighty name we pray Lord Jesus. Amen.

1. Some critics claim that the apostle John concluded his gospel in John 20:31 and an anonymous writer wrote chapter 21. “﻿But the linguistic evidence does not support this notion. In addition, other great books of Scripture have appendixes after reaching a grand climax (cf., e.g., Rom. 16 following Rom. 15:33). Thus John 21 is neither without value nor out of harmony with other Bible books.” (Edwin A. Blum, The Bible Knowledge Commentary Gospels, Editors John F. Walvoord and Roy B. Zuck, (David C Cook, 2018 Kindle Edition), pg. 701; see also J. Carl Laney Moody Gospel John Commentary (Chicago: Moody Press, 1992), pg. 373 cites Barclay M. Newman and Eugene A. Nida, A Translator’s Handbook on the Gospel of John (London: United Bible Societies, 1980), pg. 623; Donald A. Carson, The Gospel According to John (Leicester, England: Inter-Varsity Press, and Grand Rapids: Wm. B. Eerdmans Publishing Co., 1991, pp. 665-668. Constable writes, “The structure of this chapter is similar to the rest of the Gospel’s. John first narrated an event (vv. 1-14), and then related Jesus’ teaching based on that event (vv. 15-23). Finally he concluded his Gospel (vv. 24-25).” Tom Constable, Notes on John (2017 Edition), pg. 387.