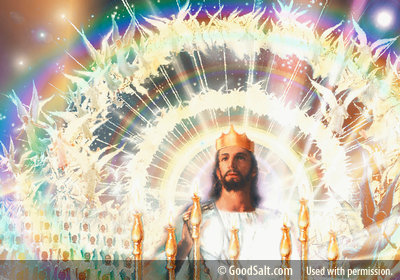 “And I heard, as it were, the voice of a great multitude, as the sound of many waters and as the sound of mighty thunderings, saying, ‘Alleluia! For our Lord God Omnipotent reigns!’” Revelation 19:6

Following the first three outbursts of praise toward God in heaven for the destruction of Rome (19:1-4; cf. 18:1-24), the apostle John now records a fourth outburst of praise for the coming rule of God on the earth (19:5-6). “Then a voice came from the throne, saying, ‘Praise our God, all you His servants and those who fear Him, both small and great!’” (Revelation 19:5). John hears an authoritative “voice,” probably an angel’s, “from the throne” in heaven calling “all” God’s “servants,” both angelic and human, to “praise our God,” including the “small and great” saints and prophets (cf. 18:20, 24; 19:2). 1

As a result of this call to praise, John writes, “And I heard, as it were, the voice of a great multitude, as the sound of many waters and as the sound of mighty thunderings, saying, ‘Alleluia! For our Lord God Omnipotent reigns!’” (Revelation 19:6). Together “a great multitude” of all God’s servants in heaven, angelic and human, praise the Lord God with “the voice” that sounded like both the roar of huge waterfalls (“many waters”)and loud cracks of “mighty thunderings” announcing the soon arrival of the all-powerful Messiah’s reign(“our Lord God Omnipotent reigns”) on the earth. 2 This praise is not for the judgment of Rome that just took place (18:1-24) but is prophetic for what is about to happen. 3 The eternal reign of the Lord Jesus Christ is about to replace the rule of sinful humankind on earth. 4

“There are two ways in which God can reign: in blessing and in judgment. Either way, it is an awesome thing when the Lord manifests His presence and establishes His rule in an open and visible way.” 5

We can join with that heavenly multitude in anticipation of what God will do in the future. As believers in Jesus, we do not have to wait until the events of Revelation 19 come to pass to praise God for His coming kingdom on earth. Until Jesus Christ returns to earth and defeats His enemies and establishes His rule on the earth, God will permit people the freedom to live their own way. But at any moment, God could begin to take back the kingdoms of the world. One day the dominion that Adam surrendered to Satan through sin will be returned to the perfect Man, the Lord Jesus Christ. Then all people around the world can sing together the lyrics of Handel’s “Hallelujah Chorus,” not in anticipation of what God will do one day but in celebration of its arrival: “Hallelujah for the Lord God Omnipotent reigneth!” 6

During His earthly ministry, Jesus encouraged His disciples to pray, “9 Our Father in heaven, hallowed be Your name. 10 Your kingdom come. Your will be done on earth as it is in heaven.” (Matthew 6:9-10). Although Christians have faithfully prayed this prayer since the first century, most of this ancient prayer has not been answered literally. If we are honest with ourselves when we look at world affairs, none of us would conclude that God’s kingdom has literally come to earth where His will is “done on earth as it is in heaven.” As a matter of fact, when we turn on the news, it seems more like Satan’s kingdom has come and his will is done around the globe. 7

During this church age, believers in Jesus are commanded to make disciples of Jesus by preaching the gospel of Christ’s death and resurrection to a lost world (Mark 16:15; I Corinthians 15:3-6), followed by baptizing those who believe the gospel as the first step of discipleship, and then teaching them obedience to all Christ’s commands (Matthew 28:19-20). But the day when King Jesus rules on the earth so that the Father’s will is “done on earth as it is in heaven” will not take place until at the end of the seven-year Tribulation when Jesus returns to earth (Revelation 11:15-19; 19:11-20:6).

What a glorious day that will be when King Jesus sits on His throne in Jerusalem and rules with a rod of iron so that all His subjects will obey Him, and universal peace will be established (Isaiah 2:4; 9:6-7; 11:6-9; Psalm 2). Do you know for sure you will be in Jesus’ glorious kingdom on earth? If not, you can be certain if you hear and believe Jesus’ invitation when He said:

Why do we need to be born of the Spirit? Because the Bible tells us that all of us have sinned against God with our thoughts, our words, and our actions (Romans 3:23). The penalty for our sins is “death” or separation from God (Romans 6:23a). The final punishment for sin is death in a terrible place of torment and suffering called hell (Mark 9:43-48) or the lake of fire (Revelation 20:15).

God does not want any human being to suffer forever in the lake of fire, so He provided the solution to our sin problem when He sent His only perfect Son, Jesus Christ, to earth over two thousand years ago to live a perfect life, die for our sins on the cross, and rise from the dead three days later as He promised (John 3:16a; I Corinthians 15:3-6; Hebrews 4:15), proving His claims to be God are true (Romans 1:3-4).

Jesus is alive today and He has the power to save us from hell and give us eternal life so we may enter His kingdom when He returns to earth at the end of the Tribulation period. All we need to do to be born of God’s Spirit and enter His kingdom is believe in Jesus. Christ said to a religious leader named Nicodemus who was trusting his good life to get to heaven, “14 And as Moses lifted up the serpent in the wilderness, even so must the Son of Man be lifted up, 15 that whoever believes in Him should not perish but have eternal life.” (John 3:14-15).

In Numbers 21, the people of Israel were on the way to the Promised Land. They were complaining against God and were dissatisfied with the manna He sent them. To discipline them, God sent poisonous snakes among the people, resulting in many physical deaths (Numbers 21:4-6). Moses then asked God to remove the snakes. God told Moses, “Make a fiery serpent, and set it on a pole; and it shall be that everyone who is bitten when he looks at it, shall live” (Numbers 21:8).

In a similar fashion, all of humankind has been struck down by sin. Sin has sunk its fangs in our spiritual souls and the venom has made its way to our hearts and we are dying in our sins. But God saw our hopelessness and “lifted up” His Son on the cross to die for our sins. To be born of the Spirt and enter God’s kingdom, we must simply “look and live,” just as in Numbers 21 one had to “look and live.”Jesus explained their “look” as simply believing in Him when He said, “that whoever believes in Him should not perish but have eternal life.” We must look to Jesus alone for entrance into His kingdom, not our own righteousness or human efforts.

I think we underestimate Satan’s strategy. Satan is a deceiver. You won’t recognize him by his dress or conduct. He might even wear the suit of a preacher. He will probably encourage you to be as much like God as possible without being related to God. Satan is on the side of religion; he is not opposed to it if religion leaves out a Christ-alone salvation. That way, he can deceive people into an eternal hell.

God takes us to heaven based on His Son’s performance on the cross, not ours. He offers eternal life only based on His grace – favor we do not deserve. Grace with anything added to it ceases to be grace (Romans 11:6). If we trust in anything in addition to Christ for salvation, then we have fallen victim to Satan’s deception. Christ and Christ alone saves us from an eternity in hell and grants us entrance into His eternal kingdom.

Do you have religion without Christ? Why not turn from religion to a relationship with Jesus? Jesus invites you to believe in Him for eternal life. The word “believe” in the New Testament means to be convinced that Christ died for our sins and rose from the dead and then trust or depend upon Christ.

Several years ago, a friend of mine visited the Houston Astrodome. Suspended three hundred feet above the playing field was a twenty-seven-thousand-pound gondola. That gondola was held in place by five cables which are each 5/8 of an inch thick. When a newscaster sat in that gondola, he was trusting the cables to hold him. Everything he has done and everything he is means nothing. He must depend on those cables to hold him.

Christ paid for all our sins by dying on the cross in our place. God now comes to you and asks you to depend upon Christ as your only way to heaven. It doesn’t matter if you are a child who is nine or an adult who is ninety. It matters not if you are a morally good person or if you have spent more time inside a jail than outside, you must trust in Christ alone to save you. Perhaps you can identify with Nicodemus – you have always believed the way to heaven was by living a good life or by believing in Christ plus something else. But now you understand you were mistaken, and you want to trust Christ alone to get you to heaven. Again, the promise is “Whoever believes in Him should not perish but have eternal life” (3:15). The moment you believe this, Christ guarantees you will enter His eternal kingdom on earth in the future.

Prayer: Heavenly Father, for centuries Christians have prayed for Jesus’ kingdom to come to earth. Thank You for reminding us today that all of heaven praises You for Your coming kingdom. May each of us pray for this coming kingdom and live for it by putting You first in our lives (Matthew 6:9-10, 33). For anyone who has been deceived by Satan’s lies to think they can enter Christ’s coming kingdom by living a good life or by believing in Christ plus something else, please persuade them to know and believe the truth that Jesus Christ alone grants entrance into His eternal kingdom to those who believe in Him alone. Thank You Father for hearing our prayers. In the matchless name of the Lord Jesus Christ, we pray. Amen.