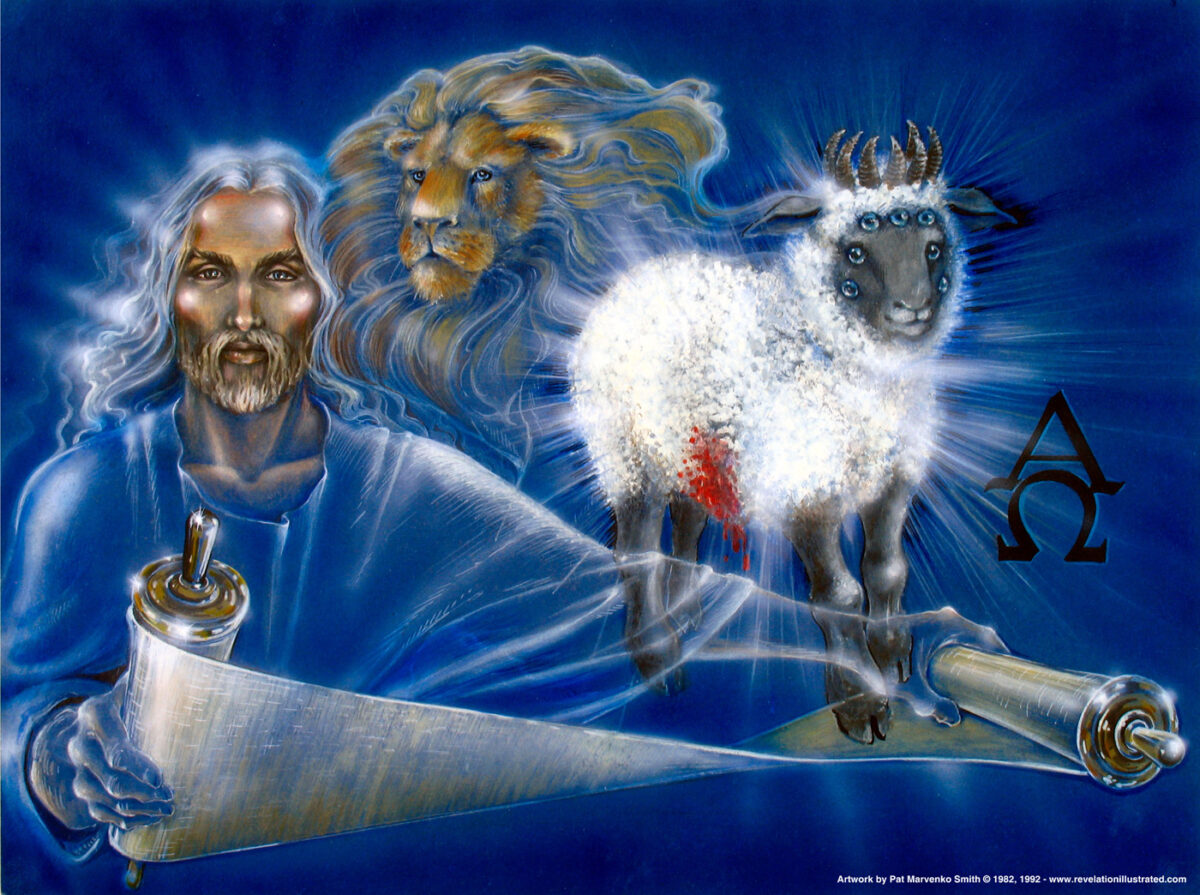 “But one of the elders said to me, ‘Do not weep. Behold, the Lion of the tribe of Judah, the Root of David, has prevailed to open the scroll and to loose its seven seals.’” Revelation 5:5

Christian author and speaker, Chuck Swindoll writes, “﻿I never cease to marvel at the advances of the modern world. The field of medicine has given us a life expectancy higher than ever. In many countries, even some people living in poverty live longer and have more comforts than kings of the past. Technology has sped up communication and transportation, essentially shrinking the globe. Within seconds, a person in Canada can chat with a friend in Thailand. Within a day, they can shake hands. At least in the Western world, humans have overcome many social and political problems, learning to face new challenges in the twenty-first century. We human beings have certainly come a long way!

﻿“Over a century ago, liberal theologians thought we were on the verge of ridding ourselves of the barbarism, imperialism, and superstition that had led the world astray for so long. This included what they saw as the ‘mythical’ trappings of Christianity—things like the Virgin Birth, the deity of Christ, and the bodily resurrection of Jesus. Armed with modern science and philosophy, those enlightened intelligentsia were convinced that people could finally mold the world into what it was meant to be—an enduring kingdom of peace and prosperity on earth. In short, they believed that humanity, equipped with the ﻿latest ideologies and technologies, was worthy to forge a glorious destiny, trusting in human ability rather than trusting in God.

“As you probably know, this overconfidence in humanity evaporated like a morning fog. In 1914 an assassin’s bullet ignited the fire that exploded into World War I. Germany was armed to the hilt with the most advanced weapons produced at the time. And they had the unwavering support of Germany’s leading philosophers and even theologians! That great conflict, dubbed ‘The War to End All Wars,’ was quickly followed by the terror and atrocities of World War II. By then, mass killing had been reduced to a science at Auschwitz, and science had also been used to create the massive destruction of the atomic bomb! Then came the horrors of terrorism, which military authorities say is here to stay. The reality of human depravity has dashed the misplaced hopes of humanistic philosophy and liberal theology. Today the world is left wandering in unbelief, doubt, uncertainty, and fear. People wonder whether anyone or anything is able to truly remove the evil around us.

“Is anyone worthy to vanquish wickedness and usher in a world of true peace and prosperity? As the world continues its desperate and disappointing search for worldly answers to life’s problems, the Bible reveals the solution in clear words and vivid images. In Revelation 5 we experience the ﻿inexpressible joy that John felt when the attention of all creation finally centers on the only One who can take the reins of history and tame a world spinning out of control—Jesus, the worthy Lamb.” 1

Before God pours His wrath on rebellious humankind on earth (Revelation 6-18), He describes the Person Who is worthy to open a scroll containing God’s judgments to be unleashed on the earth during the 7-year Tribulation period. Chapter 5 continues the vision the apostle John was given of God and His throne room in Chapter 4. “And I saw in the right hand of Him who sat on the throne a scroll written inside and on the back, sealed with seven seals.” (Revelation 5:1). ﻿The “scroll” that John saw “in the right hand of” God the Father is representative of the judgments God will pour out on the earth throughout the Tribulation period (cf. Revelation 6:1ff).The opening of just one seal alone, the fourth seal, will result in the death of one fourth of the world’s population (cf. Revelation 6:7-8). 2

This “scroll” was the focus of John’s attention in chapter 5, and it is what Jesus Christ opens (unseals) in chapter 6, resulting in the judgments that will be unleashed upon the earth. This rolled document was so full of words that John could see writing on the outside (“on the back”) as well as on the “inside” of the scroll (cf. Ezekiel 2:9-10). 3 Papyrus documents have been discovered that contain writing on both surfaces of the sheets, though this was unusual. 4

Someone, probably God, had “sealed” the scroll with “seven seals,” suggesting the profound nature of the revelation it contained. 5 Roman law required that people seal their wills “seven” times because they were very important documents. 6 The perfect number (i.e., seven) of seals may also hint at the absolute purity of the scroll. 7

“In John’s day, people used a seal to keep the contents of a document secret, unchangeable, and free from tampering—until some authoritative person broke the seal. In this case, after Jesus broke the first seal, the scroll unrolled until the second seal kept it from opening further. Then He had to break the second seal in order to reveal more of the contents, and so on. Probably the seals were located on the edge of the scroll.” 8

“﻿The scroll is like a title deed to the earth. It depicts God’s ownership of all creation and right to hold accountable those who misuse it and thus dishonor Him. Through judgment administered by Jesus, God once again will lay claim to His creation, which was plunged into sin by Adam in Genesis 3.” 9

﻿“In fact, no one is worthy even to look at the Lord’s plan for worldwide judgment, much less administer it, prompting John to weep.” 13 “So I wept much, because no one was found worthy to open and read the scroll, or to look at it.” (Revelation 5:4). John “wept much because no one was found” who was qualified to “open the scroll” and execute God’s wrath and bring His enemies into submission to Him.

﻿“John knew that if no one had been found worthy, the hopeless condition of the present world would continue indefinitely. The ﻿suffering, pain, sickness, and death that characterize everyday life would never come to an end! Yet John’s weeping may have had another dimension. For over sixty years he had placed all his hope in Jesus Christ to turn the world right side up. If heaven’s search for a worthy heir failed, so would his confidence in Jesus Christ.”  14

﻿“Spiritually minded people long for that future day when the evil cosmos will be subjugated, and God will be obeyed. Because no one is found worthy to execute God’s wrath and bring this subjugation about, John is extremely grieved.” 15

How deeply grieved are we to see the postponement of God’s wrath upon the earth which will bring all His enemies into subjection to Him? Does our heart yearn to see God’s righteousness bring to justice those who have rebelled against Him and caused much suffering and pain to His servants? For centuries, believers have prayed for God’s kingdom to come on earth (Matthew 6:10) only to be disappointed. Perhaps our generation will be the one to see this come to pass.

The word “prevailed” is the Greek word enikēsen and ﻿is from the same word used in Revelation 2 and 3 to describe the victorious believers who earn the title of “overcomer” and thereby reign eternally with Christ (cf. Revelation 2:25-27; 3:21). The implication is that Christ was completely and perfectly faithful to God in His role as Messiah. He is the ultimate Overcomer, and therefore only He has earned the right “to open the scroll and to loose its seven seals” as the Executor of God’s judgments. 17

﻿“This scene reflects the fact that sinful people, even when they are redeemed, fall short of the qualifications necessary for one who could judge the earth. But Christ, by virtue of His full divinity, sinless humanity, and atoning death, is qualified. God the Father has granted judging authority to the Son (see John 5:22, 27). Jesus died to redeem humanity at His first coming. He will judge in order to redeem the entire creation at His second.” 18

Through tear-filled eyes now sparkling with renewed hope, John looked for the Lion—but instead he saw something else. 19 “And I looked, and behold, in the midst of the throne and of the four living creatures, and in the midst of the elders, stood a Lamb as though it had been slain, having seven horns and seven eyes, which are the seven Spirits of God sent out into all the earth.” (Revelation 5:6). John now saw the “Lamb” of God, the Lord Jesus Christ (Isaiah 53:6-7; John 1:29), “in the midst of the throne” room of God. The Lamb of God now took center stage among all the angelic creatures and the twenty-four elders gathered around the throne, as the central character and most important Personage in the entire heavenly scene (cf. 3:21; 4:6; 7:17). The Lamb “stood” ready to complete His work, bearing the marks (wounds, scars) of His death (“as if slain”). 20

“In one brilliant stroke John portrays the central theme of NT revelation—victory through sacrifice.” 21

Because Jesus is qualified to bring judgment to earth, “Then He came and took the scroll out of the right hand of Him who sat on the throne.” (Revelation 5:7). John saw the Lamb of God come and take the “scroll out of the right hand of” the Father “who sat on the throne” to signify the transfer of authority to execute judgment from the Father to the Son. The word “took” (eilēphen) is in the perfect tense to provide a vivid dramatic picture of the actual scene. 24 The transfer of authority was complete. During His earthly ministry Jesus had said, “For the Father… has committed all judgment to the Son… and has given Him authority to execute judgment also, because He is the Son of Man.” (John 5:22, 27).

In conclusion, Jesus Christ is the only One worthy to execute God the Father’s judgments on rebellious humankind during the Tribulation period (5:1-7). This serves as a motivation for believers now to live for Him Who will judge rebellion in the future.

Prayer: Holy Father in heaven, for centuries people have trusted in themselves and their own ingenuity to rid this earth of evil only to find themselves overcome by more unbelief, doubt, uncertainty, and fear.As the world continues its search for solutions to life’s problems, You remind us in Your throne room in heaven of the only One Who is qualified to tame a world that is spinning out of control – Your Son Jesus Christ, the Lamb Who was slain and the Lion Who alone is worthy to judge the earth. Since Jesus will judge rebellion in the future, we who know Him as our Savior bow before Him and commit ourselves to give Him all our love and devotion. For He alone is worthy of all glory, honor, and power both now and forever!!! In the mighty name of the Lord Jesus Christ, we pray. Amen.