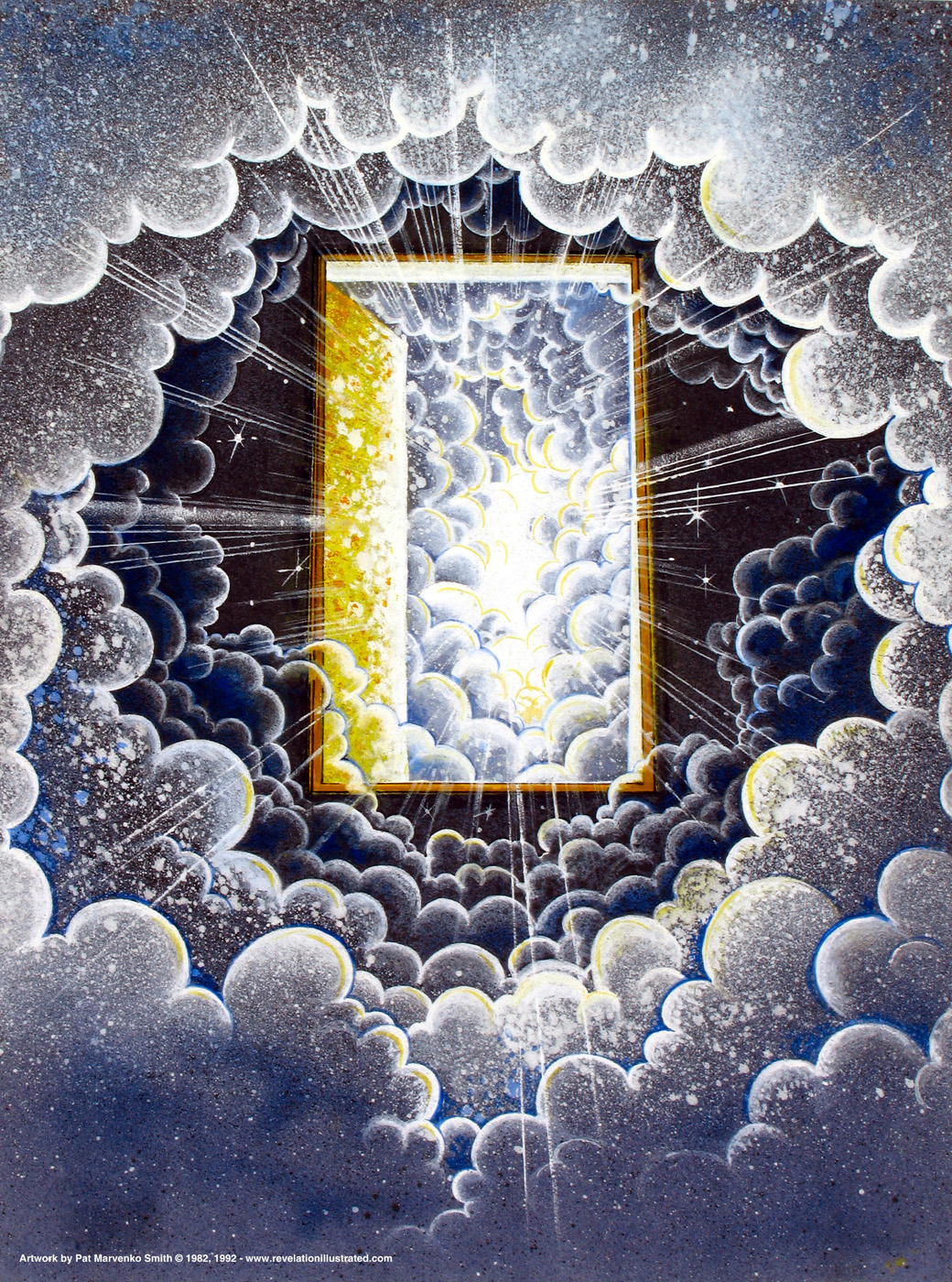 “Immediately I was in the Spirit; and behold, a throne set in heaven, and One sat on the throne.” Revelation 4:2

After recording “the things which you have seen” (1:19a) pertaining to the vision of the ascended Lord Jesus walking among seven lampstands in Chapter 1, and “the things which are” (1:19b) involving Jesus’ seven messages to the seven churches in Asia Minor in Chapters 2 and 3, the apostle John transitions to the third part of the divine outline for the book of Revelation. The apostle now records “the things which will take place after this” (1:19c) concerning future events in Chapters 4 to 22.

John writes, “After these things I looked, and behold, a door standing open in heaven. And the first voice which I heard was like a trumpet speaking with me, saying, ‘Come up here, and I will show you things which must take place after this.’” (Revelation 4:1). The phrase “after these things” refers to the vision John received of Jesus’ messages to the seven churches (2:1-3:22). ﻿This is a reference to the church age—that is, the period of history between Christ’s ascension and His Rapture or removal of believers from the earth. 1

After recording Jesus’ final message to the church of Laodicea, those last words were rather significant considering what John was about to see next. The vision of Christ standing outside the lukewarm church of Laodicea knocking on a closed door and promising a throne to the one who overcomes (3:20-21) suddenly shifts to a contrasting vision of an open door in heaven where John sees an eternal and glorious throne (4:1-2). 2 Twice in the book of Revelation, we are told that the door to heaven was opened. The first time was so the church could be received into heaven at the Rapture (4:1-4). The second time was so Christ could leave heaven with His church to return to earth (19:11-20).

Before we look at the details of this vision John received, let’s consider what is meant by the word “heaven.” ﻿The Greek word translated “heaven” is ouronos. It refers to “the portion or portions of the universe generally distinguished from planet earth.” 3 The word “heaven” is divided into three levels in the Bible: 4

– The “first heaven” includes the sphere surrounding the earth known as our atmosphere where birds fly and clouds float (Genesis 1:6-8, 20).

– The “second heaven” ﻿includes everything in the cosmos above the earth’s atmosphere—the moon, sun, planets, stars, and galaxies (Genesis 1:14-18). From a modern worldview perspective, both the first and second “heavens” are technically still part of the physical universe. But that is not the case with the “third heaven.”

– The “third heaven” was the term used to describe the dwelling place of God, the angels, and any other spirit beings. The apostle Paul said he “was caught up to the third heaven… into Paradise” (2 Corinthians 12:2, 4). Before Jesus died on the cross, believers in Jesus went to a place called “Paradise” or “Abraham’s bosom” (Luke 16:22; 23:43) and unbelievers went to a place called “Torments” in Hades (Luke 16:23). When Jesus died on the cross, He released the souls and spirits of believers in Abraham’s bosom (Ephesians 4:8-10) to go to God’s home in the “third heaven” (2 Corinthians 12:2-4; cf. Matthew 6:9; John 14:2-3; Acts 7:59-8:1; 2 Corinthians 5:8; Philippians 1:21-23). Hence, the “third heaven” is what we might call the “spiritual realm,” a plane of reality accessible only by heavenly invitation, like the one John received in Revelation 4:1. This is where God lives and rules.

But when an unbeliever dies, his or her spirit and soul go straight to Torments in Hades where they stay until they are called out to face God at the Great White Throne Judgment where they are judged according to their works to determine their degree of punishment in the Lake of Fire (Revelation 20:11-14). Then they will be confined to the Lake of Fire or Hell forever with Satan and his fallen angels (Matthew 25:41; Revelation 20:10, 15)!

“So, when John was taken up into heaven, he was not transported to another planet or even another galaxy. Rather, he was caught up to the ‘third heaven,’ to the presence of the living God.” 5

John then hears a booming “voice… like a trumpet,” most likely belonging to Christ, inviting him to “come up” through this open door in heaven where he would receive revelations about “things which must take place” during Daniel’s seventieth week of years (Daniel 9:27) which is the 7-year Tribulation period (4:1c; cf. 4:1-11:19).

In Revelation 1-3, John has been on earth on the island of Patmos. But now his venue is about to shift from earth to heaven where he can get a heavenly perspective about future events. It is helpful to understand that scenes alternate from heaven to earth throughout Revelation 4-20. ﻿

“This alternating pattern reassures readers that the chaos on earth is being controlled by heaven. God is on His throne and superintends all that transpires on earth. This should be a supreme comfort in uncertain, troubled times.” 6

﻿“After Revelation 2–3 no reference is made to the Church again until 22:16, and so some see 4:1 as a picture of the Rapture of the Church. However, the apostle alone, and not the Church, is summoned by this voice. Therefore, this is an invitation to John to enter God’s dwelling place and receive new revelation regarding His future plans.” 7

Next, John writes, “Immediately I was in the Spirit; and behold, a throne set in heaven, and One sat on the throne.” (Revelation 4:2). “Immediately” John “was in the Spirit.” To be “in the Spirit” means to“﻿enter the spiritual perspective. That is, to see things that physical eyes cannot see, as when believers are commanded to pray in the Spirit (Jude 20). Naturally, certain aspects of John’s experience of being in the Spirit were unique and not repeatable since he was writing Holy Scripture. But much of it is repeatable. Believers today can abide in the Spirit, receiving understanding of God’s will and work. Too often, though, we merely ‘visit’ the Spirit, so to speak, without ‘living﻿ with him’ in a condition of heightened spiritual awareness.” 8

With the proper spiritual perspective, John is transported through the open door in heaven where he saw “a throne set in heaven, and One sat on the throne” (4:2b). This is like the perspective described in Isaiah 6:1-8, where the prophet Isaiah “saw the Lord sitting on a throne, high and lifted up, and the train of His robe filled the temple” as “seraphim” stood above Him (Isaiah 6:1-2). 9 The “One… on the throne” (4:2b) was God the Father because both the Son (5:5-7) and the Spirit (4:5) are set apart from Him. 10 The fact that John saw God on His throne before the series of judgments are given underlines the sovereign control of God (cf. 4:1–5:14; 8:1-6; 15:1-8). Heaven determines what happens on earth. So even when we feel out of control as we watch the world move quickly toward end-time events, we can rest in God the Father’s rulership from heaven.

The description of God’s throne having the “appearance” of “jasper and a sardius stone” signifies the absolute purity (“jasper” is clear as crystal, like a diamond; cf. 21:11) and the righteous anger toward sin (“sardius” was a fiery red stone) that will characterize the series of judgments coming from God’s throne. The “rainbow around the throne” was like “an emerald” having different shades of green, reminding us of Genesis 9:12-17, where God designated the rainbow as a sign of His covenant with Noah never to destroy the earth with a flood again. Each time a rainbow occurs in the Bible, it is a reminder of God’s perfect faithfulness to His promises. These three stones together “reveal that God’s throne is a throne of grace (cf. Hebrews 4:16). Even in the terrors of the Tribulation, God is gracious, because if He did not limit it to seven years, no one would be left alive (cf. Matthew 24:21-22).” 12

John’s vision of God’s throne room and its majesty, communicates some profound truths about God the Father. He is the center and source of all creation. Everything points to and revolves around Him. He occupies a throne from which judgments are made that are rooted in His absolute purity, righteous anger toward sin, and His perfect faithfulness to His promises. God the Father has unshakable authority over all things (Psalm 115:3; Daniel 4:35). His sovereign rule is fixed, permanent, and unwavering. Once we personally come to grips with John’s vision of God’s throne room, our response can be nothing less than profound admiration, unwavering commitment, and deep reverence for the eternal King. 13

John’s vision reminds us that true worship starts and ends with the living God of the universe. Unfortunately, many twenty-first century Christians, including myself, have lost sight of what John experienced in God’s throne room.

Swindoll continues, “Worship is ascribing ‘worth’ to something or someone. We attribute value, honor, and devotion to our object of worship. When we truly worship God, we turn all of our attention, affection, and adoration toward Him. That’s the missing jewel—worshiping God by ascribing supreme worth to Him, for He alone is worthy. God alone is the subject of our praise and the object of our worship. We miss it when we focus on the horizontal—on people and things—rather than on the vertical—on God and God alone. It has become too common for Christians to surrender everything for their work yet sacrifice nothing in worshiping the One who gave His life to save ours. Stop and think. Is that you?” 15

Before we pray, I want to invite you to take some deep breathes and release to God whatever is distracting you from Him. It may be work, a relationship, an illness, a financial burden, or an emotion. Then read Revelation 4:1-11. Notice that all of heaven is focused on the One Who sits on the throne. ﻿They are praising Him for Who He is (holy, righteous, faithful) and for what He has done (created and sustains all things). They are not distracted by each other or by the furniture of the throne room, or by their own wandering thoughts. Instead, they keep their eyes, ears, and hearts on the One Who is worthy of all praise. 16

Prayer: Father God, thank You for transporting John into Your throne room in heaven so all of us who read this can heighten our spiritual perspective. Thank You for God the Holy Spirit Who enables us to see things that physical eyes cannot see. The first thing John sees Father, is You sitting on Your throne, ruling the universe. As chaos worsens in the world, we can find comfort knowing You are still in control and that heaven determines what happens on the earth. Thank You for the appearance of three stones which indicate that the judgments that come from Your throne are rooted in Your absolute purity, righteousness, and faithfulness to Your promises. None of Your decisions made on this throne are corrupt, sinful, or based on deception. Because You still sit on a throne of grace, Your decisions remain gracious and invite us to approach You with confidence. Father, we thank You for the Lord Jesus Christ Who has provided a new and living way into Your heavenly throne room. In His mighty name we pray. Amen.