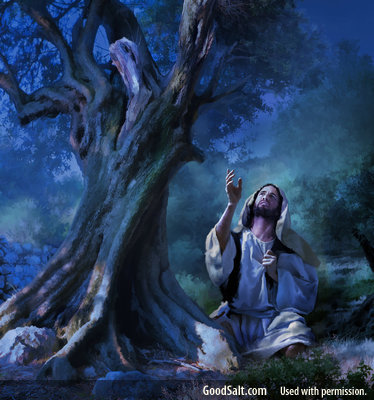 “When Jesus had spoken these words, He went out with His disciples over the Brook Kidron, where there was a garden, which He and His disciples entered.” John 18:1

We are learning in John 18:1-12 how we can endure difficult times. Last time we discovered the first way is to learn about the love of Christ (John 18:1a). The second way to endure difficult times is in the last half of verse 1. “When Jesus had spoken these words, He went out with His disciples over the Brook Kidron, where there was a garden, which He and His disciples entered.” (John 18:1b). Christ crossed over the Brook Kidron to go to “a garden.” This is not necessarily a reference to a place where flowers or vegetables are grown, but to an orchard where olive trees are growing on the side of the Mount of Olives. 1

John is referring to the Garden of Gethsemane (cf. Matthew 26:36; Mark 14:32). The word “Gethsemane” (Gethsēmani) means an “oil press” 2  or a place where the olives are pressed and pressured so that the oil would come out. Jesus was pressured spiritually like never before in the garden that night. John leaves out the agony of Gethsemane where Jesus fervently prayed to the Father concerning the cross (cf. Matthew 26:36-46; Mark 14:32-42; Luke 22:39-43). His sweat became like blood (cf. Luke 22:44). Why does John leave this out? Because his purpose is to show Jesus in complete control over the situation. Christ is presented as the Victor in John’s account, not the Victim.

This garden was probably something some wealthy citizen of Jerusalem owned. They didn’t just have free land outside of Jerusalem in those days. All the gardens that were around Jerusalem were owned by wealthy citizens in Jerusalem. They didn’t have big gardens in Jerusalem for two reasons: there wasn’t enough land and the law forbid them from putting manure or fertilizer on the ground in Jerusalem. So even if you did have a garden in Jerusalem, it would not grow anything. So all the wealthy citizens would buy these gardens outside of town and they would go out there to relax. 3  We don’t know the name of the person who owned this garden. But whoever he or she was, they lent this garden to Jesus during the hour of His greatest need. I find it intriguing that God does not tell us the name of this significant person who ministered to our Lord at this time. Perhaps the Lord Jesus will reveal this person to us in heaven.

Nonetheless, the main observation here is that Jesus went to Gethsemane to prepare for Calvary. He prepared for His suffering (arrest, trials, and crucifixion) by spending time in prayer with His heavenly Father. So the second way to endure difficult times is to LOOK TO THE LORD IN PRAYER (John 18:1b; cf. Luke 22:39-42).

Do you have a quiet place where you can get alone with the Lord to pray? Dr. Tony Evans said, “Pain is always an invitation to pray.” 4  God allows pain in our lives to cause us to depend more on Him in prayer. Where do you go when you are in pain? Do you go to the internet? To a bottle of booze? To drugs? To a boyfriend or girlfriend? To the Lotto (lottery)? To your job or ministry? Where do you go? Jesus turned to His heavenly Father in prayer.

John tells us that “Jesus often met there with His disciples” (18:2b). Christ went there often with His disciples to pray. This is where He got His endurance. If we are going to endure trials in a way that honors Jesus Christ, we must make it a habit to talk to Him in prayer.

The Bible tells us when we face tough times, to “Trust in Him at all times, you people; pour out your heart before Him; God is a refuge for us” (Psalm 62:8). When God allows pain in our lives, He invites us to trust Him and pour out our hearts before Him. Why? Because “God is a refuge for us.” He is a safe Person to share our hurts and struggles with because He understands and sympathizes, having gone through similar struggles (Hebrews 4:15). He will not tell others what we share with Him. He will not mock us or betray us. He has our best interests in mind. Go to Him in prayer because He loves you and cares for you more than any other person in the universe. As we give Him our burdens, He will give us renewed strength to endure the trials we are facing.

Prayer: Father God, there is no better way to face Calvary (suffering) than to spend time in Gethsemane talking to You in prayer. Thank Youthat we can talk to You anytime, anywhere, about anything. And You are always available to listen and understand. Lord Jesus, no one understands our hurts and struggles better than You. You know what it feels like to be abandoned, alone, misunderstood, rejected, unfairly accused, and unloved. You are our Refuge. Our secrets and struggles are safe with You. Thank You for reminding us that You also know what it is like to endure suffering victoriously. Please lead us to face our difficulties victoriously with Your strength as we lean into You through prayer. In the mighty name of Jesus Christ we pray. Amen.