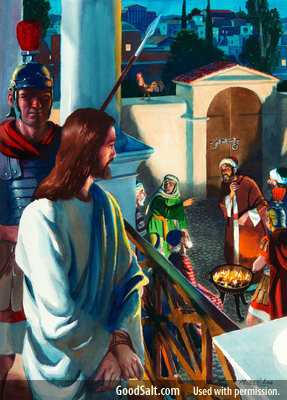 “Peter then denied again; and immediately a rooster crowed.” John 18:27

As we focus on John 18:13-27, we are learning how we can overcome failure and religious hatred. So far we have discovered we must…

Now we go back to stage two (John 18:25-27) to discover our fourth and final principle. Rather than reporting Peter’s three denials together, John tells of Jesus’ hearing before Annas between the  accounts of Peter’s first denial and his last two denials. This serves to magnify both the shame of Peter’s actions 1  and the triumph of Jesus before His enemies.

“Now Simon Peter stood and warmed himself. Therefore they said to him, ‘You are not also one of His disciples, are you?’ He denied it and said, ‘I am not!’ ” (John 18:25). If Annas and Caiaphas occupied separate wings of the same residence, the second and third denials probably took place in the same courtyard. 2  Peter was warming himself by the fire and again someone asked him if he was one of Jesus’ disciples. Again, a negative answer is expected and Peter gives it with the words, “I am not” (ouk eimi) or “Not me!” 3

“Peter then denied again; and immediately a rooster crowed.” (John 18:27). For the third time Peter denies any association with Jesus. It was a response Peter would deeply regret. At that moment a rooster began to crow. The shrill sound must have reminded Peter of Jesus’ words spoken to him a few hours earlier (John 13:38).

What had happened to Peter from the time he courageously tried to defend Jesus at his side in the Garden of Gethsemane (John 18:10) and his three denials of knowing Jesus (John 18:17, 25, 27)? In addition to what I said earlier regarding Peter’s self- reliance, his separation from Christ, and his companionship with Jesus’ enemies, I believe Peter struggled with doubt, fear, and pride. 6

Doubt had come into his life that was not there before. He thought when he leaped out at that army in the Garden of Gethsemane (John 18:10), that Jesus would do something. Christ had disappeared before when crowds tried to arrest Him (John 8:59). Or maybe He would bring lightning bolts. Peter was thinking, “I will make the first move and Jesus is going to be right behind me to back me up.” But Jesus said, “Put your sword into the sheath. Shall I not drink the cup which My Father has given Me?” (John 18:11). Peter watched them bind Jesus’ arms behind Him and this army marches Him off like a sheep that is being led to slaughter. Peter did not know what was happening. He had doubts because his plan and God’s plan did not match.

Has that ever happened to you? Your plan and God’s plan don’t match and the doubts come flooding into your soul? It happens to all of us. That is a difficult time. That is a time when we can fall prey to the denial that happened in Peter’s life.

Peter’s denials also happened because of fear. He had a fear of the unknown in his life. He knew what it was like to be with Jesus. He knew what it was like to follow Jesus. He was confident in Jesus’ presence. But all of a sudden he is separated from Christ. Jesus is in the room with the trial going on and Peter is out in the courtyard and doesn’t know what’s going to happen next. The fear of the unknown can be a terrible thing.  And it caused Peter to deny Christ.

But I believe there is one other cause that contributed the most to Peter’s denials. Jesus exposed this when He spoke to Peter in the Upper Room. It was Peter’s pride. Like all of us, Peter had pride in his life. He vowed to lay down his life for Jesus’ sake (John 13:37). He thought he would never fail his Lord. And because of that he found himself denying Jesus. His greatest weakness is the same weakness a lot of us have. His greatest weakness was the inability to recognize his greatest weakness. If only he could have seen. If only he could have listened when Jesus said, “Will you lay down your life for My sake? Most assuredly, I say to you, the rooster shall not crow till you have denied Me three times.” (John 13:38). But he did not hear Jesus. Jesus had warned him but he could not see this weakness in his life.

So he failed because he couldn’t admit to himself that he might fall. If you and I read the story of Peter and we don’t see ourselves in it we are missing something extremely important. Peter’s story is there to remind us that any of us given the right circumstances can do what Peter did. Peter has followed Jesus for over three years. Christ knew Peter better than Peter knew himself. Jesus pointed out Peter’s pride and told him he would fail Jesus three times. Just being able to admit that weakness in his life could have kept Peter from getting to that point in the courtyard. But like most of us, Peter was not willing to admit this weakness in his life.

This is the key to overcoming failure in our Christian lives: RESOLVE TO ADMIT YOUR WEAKNESSES TO JESUS (John 18:25-27). This can prevent us from getting to that point in our lives where we deny Christ.

If you are reading this and you are thinking, “I could never deny Jesus like Peter did,” you may want to think again. Or if you think that Moses, who the Bible says was the most humble man living in his time (Numbers 12:3), could fall prey to anger (Numbers 20:1-12), and then say to yourself, “It could never happen to me,” you may want to think again. Or to think that King David, a man after God’s own heart (Acts 13:22), could fall prey to adultery and murder (2 Samuel 11:1-17), and then say to yourself, “That could never happen to me.” Is your pride any different than David’s? Or to think of Solomon, who the Bible says is the wisest man who ever lived (I Kings 4:30-31), and then in his later years allowed his many wives to turn his heart away from the Lord to worship their pagan deities (I Kings 11:1-8). For us to think that he could stray from his faith but say to ourselves, “That could never happen to me,” what kind of pride says such things!?!

Are we willing to admit that we have the same kind of tendency to doubt God’s word that Abraham and Sarah had (Genesis 16), or do we say to ourselves, “That could never happen to me?” Or that Noah, who is the example of endurance – 120 years of endurance (Genesis 6:3) – and then after that endurance when he reached the pinnacle of his success found himself drunk and ashamed (Genesis 9:20-21)? What kind of pride does it take for us to say to ourselves, “that will never happen to me – that at the pinnacle of my success I am going to do something foolish? No that won’t happen.”

These stories are in the Bible for a purpose, to remind us that we are human. That we need God in every circumstance of life, every moment of life. The humble thing is to say, “Without God, anger could destroy my life. Lust could destroy my life. I could stray away from Jesus and never see the doors of the church for twenty years. Without Jesus and trust in Him daily, I could doubt God’s word and miss His blessing. Or even at the moment of greatest success, I could find the moment of greatest humiliation.” 7

But when I recognize that these truths are here to remind me that I am human and I need Christ, when I recognize my weakness, guess what happens? I turn to Him at that moment of weakness. Instead of denying Him, I follow Him. Instead of turning from Him, I trust Him. That’s the great thing about these stories. Pride does come before a fall (Proverbs 16:18). And Peter’s denials teach us this.

But if we do fail, and we will, the Bible offers us hope. Luke tells us that the moment the rooster crowed after Peter’s third denial, “the Lord turned and looked at Peter.” (Luke 22:61). The eyes of Jesus must have penetrated Peter’s soul. For we are told, “Peter went out and wept bitterly.” (Luke 22:62).

Do you think Peter breaks down and weeps because Jesus gave him a look of scorn and condemnation? Or did Jesus give him a look of forgiveness? Jesus knew Peter was going to fail (John 13:38). He was praying for Peter and knew Peter would be restored to strengthen others (Luke 22:31-32), so I believe Jesus gave Peter a look of forgiveness. Peter broke down and wept because he knew what it meant to be forgiven. He didn’t live with regret because he knew what it meant to be restored by Jesus Christ.

Peter hit bottom, but the Lord’s hand was under him to eventually bring him back up. No matter how many flaws you have nor how many times you have failed, the Lord’s hand is there to help you up and start over. The Bible says, “The Lord upholds all who fall and… gives a fresh start to those ready to quit.” Psalm 145:14 [NKJV/MSG].

Colossians 2:13 [NIV] says, “When you were dead in your sins… God made you alive with Christ. He forgave us all our sins.” Even the sins we have not committed yet, Jesus saw them in advance at the cross and died for them, and forgave them ahead of time.

Pastor Chuck Swindoll quoted A. W. Tozer, “It is doubtful that God can use anyone greatly until He has hurt him deeply.” 8   There will be times in your discipleship journey when it looks like everything is finished, but in reality that will be the beginning. Imagine how Peter felt after he denied Jesus three times and heard the rooster crow? And yet that is just the beginning for Peter. Now God can really begin to use him to strengthen others.

Prayer: Lord Jesus, I am so thankful that failure is not final for those of us who believe in You. You can use our failures to magnify Your restoring love and grace, and bring encouragement to others who fail. Help us learn from Peter’s denials of You. Any of us are capable of doing what Peter did, especially if we refuse to face our own weaknesses and transfer our trust onto You to overcome them. Thank You, my Lord and my God, for including the failures of others in the Bible to remind us that we too are prone to wander and that we need You every moment of our lives. Thank You that when we do fail, You do not give us a look of scorn or condemnation, but a look of love and forgiveness. May this image of Your grace motivate us to stay close to You every second of our lives. In Your gracious and mighty name we pray. Amen.