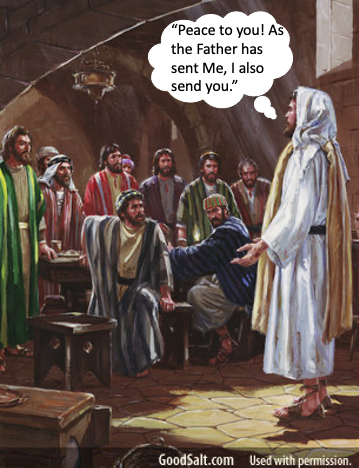 When Adam and Eve disobeyed God by eating the fruit from the tree of the knowledge of good and evil in the garden of Eden (Genesis 2:16-17; 3:1-6), they experienced shame for the first time. The complete innocence and vulnerability they once had with God and one another were now lost. “Then the eyes of both of them were opened, and they knew that they were naked; and they sewed fig leaves together and made themselves coverings” (Genesis 3:7). They were now self-conscious and ashamed of their nakedness before one another, so they tried to remove their shame by covering themselves with fig leaves.

We might assume that God came to them to punish and shame Adam and Eve for the wrong they had done, but notice that God does not seek to punish or shame His fallen children. He seeks to restorethem. “Then the Lord God called to Adam and said to him, ‘Where are you?’”(Genesis 3:9). Why would an all-knowing God ask Adam a question to which He already knows the answer? Because the Lord wanted a confessionfrom Adam. “Where are you in relation to Me?” God asks. God knew where Adam was, but did Adam know where he was in relation to the Lord?

When Adam told God, “I was afraid because I was naked” (Genesis 3:10), God replied, “Who told you that you were naked? Have you eaten from the tree of which I commanded you that you should not eat?” (Genesis 3:11). God never told Adam and Eve they were naked. This was the natural consequence of their sin.

Satan also reveals our shame to us when we sin (true shame) or don’t sin (false shame). His accusations against believers produce shame in their lives. The Devil uses fear and shame to isolate Christians from God and one another. Like a roaring lion who focuses on those who are isolated and weak, Satan focuses on believers who are alone and weak (cf. 1 Peter 5:8).

Would Adam and Eve believe God is still the same loving and merciful God that He had always been prior to their disobedience? Or would they believe the lie of the serpent who implied that God could not really be trusted (cf. Genesis 3:1-5)? The Lord did not abandon Adam and Eve when they sinned and felt ashamed. He seeks them out to restore them to fellowship with Himself.

But instead of trusting the Lord, Adam and Eve were now afraid of Him. “So he said, ‘I heard Your voice in the garden, and I was afraid because I was naked; and I hid myself.’” (Genesis 3:10). Their fear and shame now became a barrier to His loving and merciful pursuit of them. Not only were they self-conscious of their nakedness before one another, they were now self-conscious of their nakedness before God. By covering themselves with fig leaves and hiding themselves among the trees of the garden, Adam and Eve hid themselves from being able to receive God’s love, grace, and mercy which He was freely offering to them. Their faith in God had now changed to fear. Unfortunately their fear and shame pushed them away from the Lord instead of drawing them near to Him. And fear and shame can do the same to us today.

We are learning from Jesus’ encounter with His ten fearful disciples in the evening of His resurrection day how to overcome our fears. The disciples were afraid of opposition from the Jews so they were hiding behind locked doors. I wonder if they may have felt ashamed too since they had abandoned Jesus in His hour of suffering after promising to remain faithful to Him even unto death (Matthew 26:35, 56).

Like He did in the garden of Eden with Adam and Eve, Jesus sought out His disciples who were afraid and ashamed. And from this we are learning how to overcome our fears. So far we have discovered we must…

– Rely on Jesus to calm our fear with His peace-giving presence (John 20:19).

– Redirect our focus to the evidence of Jesus’ resurrection to convince our doubting hearts (John 20:20).

Today we see that we must also RENEW OUR SENSE OF PURPOSE (John 20:21). After calming and convincing His fearful disciples, they were still paralyzed by fear. They still remained behind locked doors. Amazingly, Jesus remains calm and gracious. He does not give up on them even though they may have given up on themselves.

Christ believes so much in these frightened men, that He commissions them. “So Jesus said to them again, ‘Peace to you! As the Father has sent Me, I also send you.’ ” (John 20:21). Why does Jesus repeat His extension of peace to His disciples?

﻿“Because they were terrified of the Jews. That’s why they had locked the doors (20:19). Yet Jesus gave them his peace. Notice that their situation hadn’t changed. The Jewish leaders would still oppose them in the days ahead (see Acts 4:1-24; 5:17-42). But Jesus can speak peace into trouble. Though your circumstances are unstable, he can provide the internal stability your heart needs.” 1

Christ wants to reassure these frightened men of the deep and lasting peace that could be theirs. Peace prepares them for His commissioning. Notice that Jesus’ peace is given to them before they are commissioned. Sometimes we can mistakenly conclude that we must work to gain God’s peace. But Jesus reminds us that this peace comes from His presence in our lives, not from our service for Him. Christians can easily make the mistake and conclude that peace is based upon their performance instead of the peace-giving presence of Jesus Christ. And when they do this, the peace for which they are working so hard to gain, constantly escapes them.

Can you relate to this? Instead of ministering to others out of the peace Christ’s presence has given to us, we minister to others out of fear. The fear of not measuring up. The fear of being disapproved or rejected. The fear of failing. The fear of not having what it takes to be a God-honoring follower of Christ. We can even use ministry as a way to medicate our fears. Ministry can function like an addiction. It becomes our fig leaf to cover up our fear and shame.

But when we understand that Christ’s peace comes from His presence in our lives, we can minister to others out of our identity in Christ, not out of a desperate attempt to earn God’s peace or to prove that we have what it takes. The latter leads to ruin. The former leads to fruitfulness and glory to the Father (John 15:1-8).

After extending peace to them, Jesus begins the commissioning of His disciples. Keep in mind that this is regarded as the first of Christ’s commissionings in the Gospels and Acts. It is followed by Mark 16:15-16, then Matthew 28:19-20, and finally Luke 24:46-48 and Acts 1:8 which seem to be two versions of the same commissioning. 2

Christ begins by stating that the Father had sent Him. The Greek word for “sent” (apostéllō) in the phrase, “As the Father has sent Me,” refers to an official or authoritative sending. It is in the perfect tense (apestalken), indicating that the mission of Christ is not being regarded in its historical fulfillment, but in its permanent effect. The form of the fulfillment of Christ’s mission was now to be changed, but the mission itself was to be continued.

The Greek word translated “send” (pempō) in the phrase “I also send you,” is a general word for sending. It is in the present tense. The disciples were not to start a new work, but were to carry on Christ’s work. Just as Jesus was the Father’s Representative on earth, so Christ’s disciples would be His representatives on earth.

It is much like a baton exchange in a relay race at a track meet. One relay runner passes a baton to another runner. He receives the baton, and runs with it. And when he finishes his leg in the race, he places it in the hands of another who is to continue the race.

“Since believers no longer belong to the world (15:19), it was necessary for Jesus to ‘send’ His disciples back into the world to complete the mission. Our mission does not replace Jesus’ mission, however. He carries out His present mission through us.” 3

“. . . what is central to the Son’s mission—that he came as the Father’s gift so that those who believe in him might not perish but have eternal life (3:16), experiencing new life as the children of God (1:12-13) and freedom from the slavery of sin because they have been set free by the Son of God (8:34-36)—must never be lost to view as the church defines her mission.” 4

Christ gives us His peace so we can give Him power and control over our lives. He will not take advantage of us or misuse our trust in Him. He is a good Shepherd Who radically loves His sheep. His death and resurrection prove this. Will we trust and follow Him?

Prayer: Lord Jesus, I praise You for giving me Your peace before giving me Your purpose for my life. I can now operate out of Your peace-giving presence instead of operating out of fear. I don’t have to minister to others as a way of avoiding my fears. I can now minister to others out of the peace Your indwelling presence gives to me. Thank You for entrusting me with Your mission to proclaim the gift of eternal life so that those who believe in You should not perish but have everlasting life (John 3:16). I praise You for the new life believers can experience as children of God (John 1:12). Thank You for the freedom from slavery to sin they can experience as they learn to abide in Your word (John 8:31-32). Please renew Your church all around the globe with the urgency of this mission. In Your mighty name I pray, Lord Jesus. Amen.