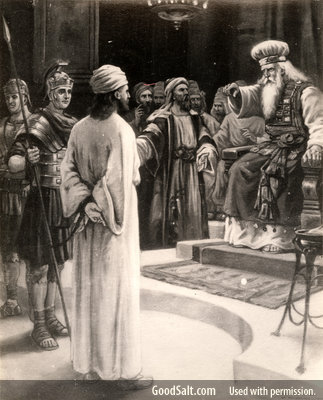 As we focus on John 18:13-27, we are learning how we can overcome failure and religious hatred. In our study thus far, we have discovered we must…

Now let’s go back to stage one where Jesus is on trial before Annas to discover our third principle. “The high priest then asked Jesus about His disciples and His doctrine.” (John 18:19). Annas is conducting a preliminary investigation before sending Jesus to Caiaphas. ﻿This may be likened to what might happen today when an arrested person is first brought into a police station. 1  Annas’ questions focus on two primary issues: Jesus’ disciples and His doctrine. He wanted to know the extent of Jesus’ following and about the teaching He propagated. Perhaps Annas wanted to know what Jesus was doing to cause such an uproar among the Jewish leaders. It is also possible that Annas suspected Jesus of leading a subversive movement to undermine the Romans.

“Jesus answered him, ‘I spoke openly to the world. I always taught in synagogues and in the temple, where the Jews always meet, and in secret I have said nothing.’ ” (John 18:20). Christ explains that He had nothing to hide. He had always taught “openly to the world.” He protects His disciples by drawing attention to His teaching. Jesus’ teaching was the same in private as in public. He was not leading a secret organization or cult. Obviously He was not denying that He had taught His disciples privately. He was simply assuring Annas that His teachings were not subversive. He did not have two types of teaching: a spiritual message for the multitudes, and a revolutionary one for His disciples.

“And when He had said these things, one of the officers who stood by struck Jesus with the palm of his hand, saying, ‘Do You answer the high priest like that?’ ” (John 18:22). One of the temple officers thought Jesus’ answer was disrespectful, so he resorted to violence and delivered a blow to Jesus “with the palm of his hand.” It was illegal to strike an unconvicted person.

Rather than turn the other cheek (Matthew 5:39), Jesus stands up for the truth and for justice. “Jesus answered him, ‘If I have spoken evil, bear witness of the evil; but if well, why do you strike Me?’ ” (John 18:23). Jesus knew that He had done nothing wrong so He demanded that they produce evidence of wrongdoing. If there was no evidence against Him, then why did they hit Him? Striking Christ without producing evidence of wrongdoing was illegal. Jesus did not let people walk over Him and violate the law. He stood up for justice and He can enable us to do the same.

Notice also what Jesus did not do. He does not respond in anger. He does not hit the officer back. But neither does He say I was wrong. Christ does not back down. He has this continued willingness to say, “I was right in what I said.” But He continues to say it with humility, without anger or malice towards the person who slapped Him. This is another way we can overcome religious hatred. We are to RESPOND TO OUR ENEMIES BY SPEAKING THE TRUTH IN LOVE TO THEM (John 18:19-24). Jesus shows us that even when you love an enemy, it is okay to tell them the truth. Don’t back down from the truth. Jesus in love says, “I am standing for the truth. Why did you strike Me?”

When looking at Jesus’ religious trials in this section, one marvels over His steadfastness under pressure. Many of us would have folded under the pressure exerted upon Christ by Annas and the illegal court proceedings. But Jesus stood up for what is true and just. He did not let their wrongdoing go unquestioned. He exposed their illegal procedures and confronted their abusive behavior.

As we grow in our relationship with Christ, He can enable us to confront abusive behaviors in others by speaking the truth with dignity. Jesus did not get caught up in the hatred of the religious leaders and hate them back. He forgave them, but that did not eliminate His boundaries. He stood up to the officer who struck Him and confronted his wrongdoing.

When people mistreat you physically or verbally, please know that Jesus understands how you feel because He endured abusive treatment as well. And I believe He would assure you that you have every right to protest!

Forgiveness means we choose not to “get even” or “get back” at someone who has hurt us. But it does not mean we automatically trust the person who has wounded us. Nor does it mean we do not protect ourselves. The offender must earn our trust once again and that takes time and effort.

Jesus was hated by the religious community. And if we openly identify with the crucified Christ, we too, will not be accepted by religious people. In fact, some of the most brutal treatment of Christians comes from religious people. Religious people do not want to see their sin or admit their need for Jesus Christ Who died in their place for their sins.

If you are in an area of the world that persecutes Christians, you can reach out to the American Center for Law and Justice (aclj.org) which is dedicated to defending persecuted Christians around the world.

Christ confronted wrongdoing which brought an end to Annas’ investigation. Abusers do not like to be stood up to. “Then Annas sent Him bound to Caiaphas the high priest.” (John 18:24). It is possible that Jesus had been “bound” during this preliminary hearing before Annas. If so, Jesus was defenseless when the officer struck Him. 2  It becomes clear at this point, that Annas and the other officials were not interested in justice. They were committed to killing Jesus.

When Jesus spoke the truth to Annas and the officer who struck Him, He was seeking to convict them of their sin, without which they would not see their need for the Savior. Because Jesus was faithful to His Father’s will and He never fails, we can trust Him to enable us to speak the truth in love to a hostile world.

There is also a stark contrast between the corrupt and self-serving high priest named, Annas, and our faithful and blameless High Priest, Jesus Christ, Who was willing to sacrifice Himself willingly for His sheep (Hebrews 2:14-18; 7:26-27). Christ wants us to know that when we fail, we can draw near to Him to obtain the grace and mercy that we need (Hebrews 4:14-16).

Keep in mind that there is no guarantee that if we are faithful to bear witness to a hostile world, God will protect us. Jesus was faithful to His Father in heaven, but He died a horrible and humiliating death. The Lord Jesus tells the church in Smyrna, “Do not fear any of those things which you are about to suffer. Indeed, the devil is about to throw some of you into prison, that you may be tested, and you will have tribulation ten days. Be faithful until death, and I will give you the crown of life.” (Revelation 2:10).

Believers in Christ who do not compromise when faced with persecution, are guaranteed a rich reward from Jesus in the future – “I will give you the crown of life.” ﻿This reward refers “to the abundant quality of existence faithful believers in Christ will experience in eternity. If the believers in Smyrna die for Christ in this life, they will receive ﻿an eternal experience that is totally opposite to the troubles they faced on earth.” 3

Prayer: Gracious High Priest, thank You for willingly enduring the illegal court proceedings and mistreatment by those presiding over it, so we may obtain complete forgiveness of our sins through faith in You. We need You, Lord Jesus, to enable us to speak the truth in love to a hostile world as You did before Annas.We need Your wisdom to discern when to speak up and when to remain silent. Help us keep our eyes upon You, Lord, to endure persecution without compromise so we may honor You throughout eternity with the rewards You give to us in the future. In Your gracious name we pray. Amen.