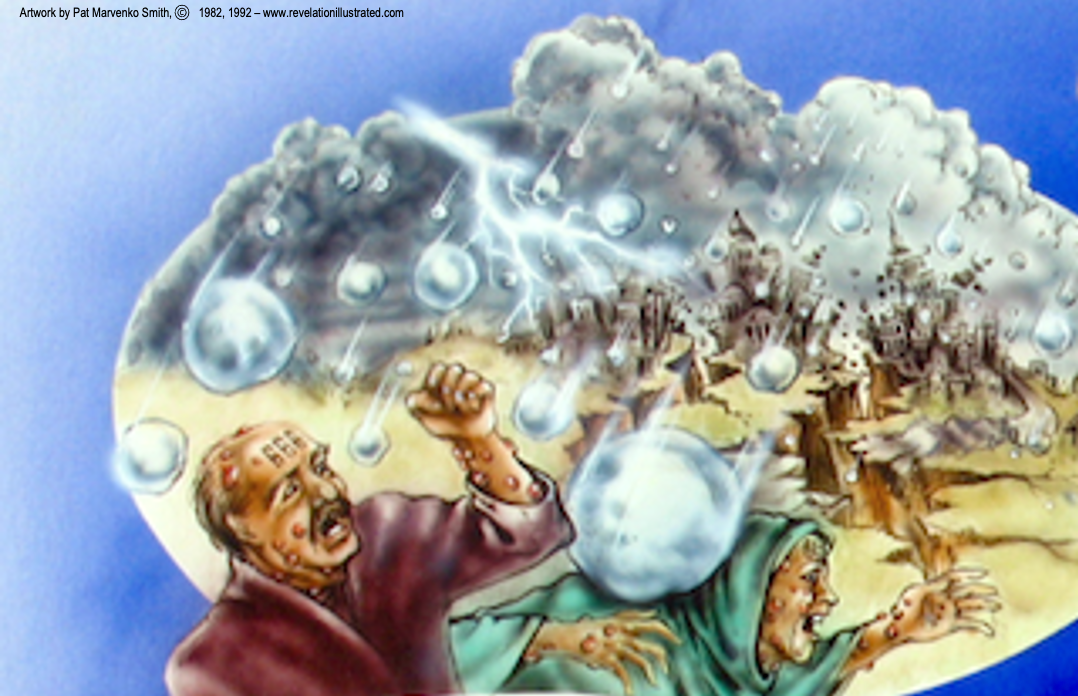 “And great hail from heaven fell upon men, each hailstone about the weight of a talent. Men blasphemed God because of the plague of the hail, since that plague was exceedingly great.” Revelation 16:21

As the sixth bowl judgment made it possible for the armies around the world to gather at Armageddon for the final battle of the Tribulation period (16:12-16), a seventh angel arrived with the seventh bowl of God’s wrath. “Then the seventh angel poured out his bowl into the air, and a loud voice came out of the temple of heaven, from the throne, saying, ‘It is done!’” (Revelation 16:17). This angel pours “out his bowl into the air” we breathe, making its impact the greatest of all.The “loud voice” coming “out of the temple of heaven” probably belonged to God and announced that with this last bowl this series of judgments “is done!” Since people would not receive the Savior’s, “It is finished!” on the cross (John 19:30), they must now receive the horrific, “It is done!” from the “Judge of all the earth” (Genesis 18:25) 1 to finish the outpouring of His wrath on humankind and begin the final phase of His coming back to earth. 2

“And there were noises and thunderings and lightnings; and there was a great earthquake, such a mighty and great earthquake as had not occurred since men were on the earth.” (Revelation 16:18). The destruction that followed was accompanied by “noises and thunderings and lightnings” that are like the manifestation of God’s holy presence on Mount Sinai (Exodus 19:16-19; Psalm 68:8). What got the apostle John’s attention was not the armies of the world gathering at Armageddon, but the mighty acts of God as He begins to convulse nature in opposition to His enemies, 3 beginning with the greatest “earthquake” the world has ever experienced.

This unprecedented earthquake will bring worldwide destruction. “Now the great city was divided into three parts, and the cities of the nations fell. And great Babylon was remembered before God, to give her the cup of the wine of the fierceness of His wrath.” (Revelation 16:19). This earthquake will divide “the great city” of Jerusalem(cf. 11:8)4 “into three parts” and destroy virtually all “the cities of the nations,” with Rome, the ”great Babylon,” being given an additional judgment of the “fierceness of His wrath” because of all the suffering she had inflicted upon God’s people and other nations (16:19; cf. 18:20, 24; 19:2). 5 Details of Rome’s judgment are given in Chapters 17 and 18 of Revelation.

“Then every island fled away, and the mountains were not found.” (Revelation 16:20). This great earthquake will cause a supernatural shifting of the earth’s tectonic plates so that “every island” disappears and “mountains” will be leveled. “As the Flood produced global topographical changes, so will this megaquake.” 6

“And great hail from heaven fell upon men, each hailstone about the weight of a talent. Men blasphemed God because of the plague of the hail, since that plague was exceedingly great.” (Revelation 16:21). This seventh bowl judgment will also cause “great hail” to fall “upon men” and crush them since “each hailstone” weighs about one hundred pounds (“a talent”). Hail was often an instrument of God’s judgment in biblical history (cf. Joshua 10:11; Job 38:22-23; Isaiah 28:2, 17; Ezekiel 13:11-13; 28:22-23). 7

“It is as though the creation, formed as an expression of God’s love, is being undone as an expression of His wrath. As in 6:16-17, people know the source of their judgment, yet they refuse to repent or honor God… Their response is as irrational as it is immoral.” 8

Just as Pharoah’s heart remained hard during the plague of hail in Egypt (cf. Exodus 9:24), so the hearts of earth-dwellers will remain hard and blaspheme God instead of humbly believing in Jesus for His gift of everlasting life.

The GOOD NEWS is you and I do not have to go through this time of horrific judgments upon the earth. The Bible says of those who believe in Jesus during this church age: “14 For since we believe that Jesus died and was raised to life again, we also believe that when Jesus returns, God will bring back with him the believers who have died. 15 We tell you this directly from the Lord: We who are still living when the Lord returns will not meet Him ahead of those who have died. 16 For the Lord Himself will come down from heaven with a commanding shout, with the voice of the archangel, and with the trumpet call of God. First, the believers who have died will rise from their graves. 17 Then, together with them, we who are still alive and remain on the earth will be caught up in the clouds to meet the Lord in the air. Then we will be with the Lord forever.” (I Thessalonians 4:14-17 NLT). The Bible assures those who believe in Jesus that they will be reunited with other believers who have died. Christ’s death, resurrection, and victorious ascension to heaven guarantees our own future resurrection and victorious ascension to heaven prior to the Tribulation wrath of God (I Thessalonians 1:9-10) if we have believed or trusted in Christ alone for His gift of salvation.

The choice is yours. Will you believe in God’s Son, Jesus Christ, for His gift of everlasting life and escape God’s temporal wrath on earth during the Tribulation and His eternal wrath in the lake of fire for eternity? Or will you shake your fist at God and reject His gracious and loving provision for your sin and experience His wrath both now and forever? I pray you will receive God’s free offer of salvation now before it is too late.

Prayer: Father in heaven, thank You for giving us a preview of the outpouring of Your wrath through these horrific bowl judgments near the end of the future Tribulation period. One reason You have done this is to encourage us to prepare for the future by placing our trust in Jesus Christ alone for His gift of eternal life so we may live with Him forever in His heaven and escape Your coming wrath on the earth. Those who do not believe in Christ will not be able to escape Your judgment in the future, whether they be alive on the earth during the Tribulation period (Revelation 6-16) or whether they have already died without Christ and will face Him at the Great White Throne Judgment (Revelation 20:11-15). As world events are rapidly moving toward the fulfillment of end times Bible prophecy, please enable us to bring glory to Your name Lord God by pointing the lost to the One who cried out on the cross, “It is finished!” Open their hearts and minds so they may believe in Christ alone to give them a future home in heaven. To You, Father God, be all the glory both now and forevermore! In the matchless name of Jesus Christ, we pray. Amen.