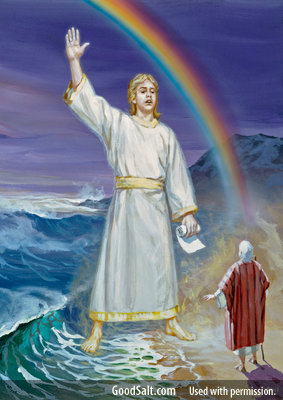 “Then I took the little book out of the angel’s hand and ate it, and it was as sweet as honey in my mouth. But when I had eaten it, my stomach became bitter.” Revelation 10:10

In Revelation 10, a second interlude interrupts the sequence between the sixth and seventh trumpets. The focus shifts, temporarily, from the outpouring of God’s wrath on unbelieving earth dwellers, to the consolation and encouragement of believers. ﻿This brief interlude reinforces the fact that things in this world are not what they seem. Believers in Jesus know there is a war going on and that at any moment the intermittent attacks and brief clashes in the battle between good and evil will erupt into the worst spiritual and physical conflict the world has ever seen. Yet God emphasizes that we, like the apostle John, have a crucial role to play. 1

Following the mighty angel’s oath stating that God will not delay His full and final judgment of rebellious humanity to avenge the wrongs done to His people (10:1-7; cf. 6:10),  the apostle John writes, “Then the voice which I heard from heaven spoke to me again and said, ‘Go, take the little book which is open in the hand of the angel who stands on the sea and on the earth.’” (Revelation 10:8). The voice “from heaven” (God the Father’s or God the Son’s) told John to “take the little book” or scroll which the mighty angel with authority over the whole planet (“who stands on the sea and on the earth”) was holding.

This “little book” represents God’s message. God’s Word is never forced on any person; he or she must take it. God’s messenger must be a willing messenger, not a draftee, but one who has put out his hand and heart to the task. 2

“﻿To John the Word of God was indeed sweet with its revelation of the grace of God and its many precious promises that belong to believers. As such it sharply contrasted with his circumstances on Patmos Island. David stated, ‘The ordinances of the ﻿Lord are sure and altogether righteous. They are more precious than gold, than much pure gold; they are sweeter than honey, than honey from the comb.’ (Psalm 19:9-10). Though the Word is sweet to believers, it will be bitter to unbelievers when it brings divine judgment on them.” 4

Much of God’s Word is sweet to those who are His children. Those who believe in Christ for His gift of salvation have no need to fear His future judgment since Christ already bore the judgment we deserved (John 5:24). We can trust God’s never changing goodness and His faithfulness to His promises.

Some of God’s plans are bitter especially for those who have no hope in Christ. God’s judgments, trials, and tribulations are hard for some people to swallow. Many are unable to see or understand how God can bring good out of their difficulties (Romans 8:28). Instead, they are overwhelmed with hopelessness and fear.

We are also reminded that we can trust that all of God’s ways – the sweet and the sour – are right and reliable. Because God is good and nothing is ever out of His control, we can be confident that He will use all things – even the deeds of evil people – to accomplish His purposes. Job’s words resonate with this truth: “Shall we indeed accept good from God, and shall we not accept adversity?” (Job 2:10). 5

Next John writes, “And he said to me, ‘You must prophesy again about many peoples, nations, tongues, and kings.’” (Revelation 10:11). ﻿Even when the Word of God is not what people want to hear, then, the man of God must continue to proclaim it. 6

Notice that John is instructed to “prophesy again,” a second time regarding the seven-year Tribulation “about many peoples, nations, tongues, and kings.” ﻿Concerning the word “again” (palin) Thayer says that “it denotes renewal or repetition of the action.” 7Pentecost writes, “This would seem to be a divine notice that, since John has taken us through the entire period once, it is God’s intention to have him retrace his way through the period again.” 8

According to Revelation 10:11, chapters 11-19 survey the seventieth week of years (Tribulation) a second time with a view to revealing the specific characters on the stage of the drama. These characters will include the Two Witnesses (11:1-12); the Woman, representing Israel (12:1-2, 13, 17); the red Dragon, representing Satan (12:3-4, 9); the male Child, representing Jesus Christ (12:5-6); the archangel, Michael (12:7-12); the Beast out of the sea, representing the future World Ruler (13:2-10); the beast out of the earth, representing the False Prophet (13:11-18). ﻿This second survey terminates the Tribulation period by the return of Christ and the consequent judgment of His enemies (Revelation 19).

Finally, we learn from Revelation 10:8-11, that like the apostle John, we have roles to play in God’s prophetic plan. ﻿We are not asked to take and eat prophetic books and utter inspired words. However, Jesus has given each of us an important mission to make disciples of all the nations (Matthew 28:19a). We do this by going and sharing the gospel of Christ’s death and resurrection with the whole world (Mark 16:15; I Corinthians 15:3-6), followed by baptizing those who believe, and then teaching them to obey all of Christ’s commands (Matthew 28:19b-20). And just like John, we must first appropriate this message, allowing it to become a part of our own lives before we pass it on to others.

Much emphasis is placed upon the love of God today, but His coming worldwide judgment of evil is often ignored or denied. John makes it clear that no one and nothing can hinder the eternal Creator God from bringing His horrific judgments to pass during the seven-year Tribulation period (10:1-11). This should cause all of us to pause and take God more seriously.

Prayer: Heavenly Father, like the apostle John, we sometimes find Your Word to be both sweet and bitter. Oh, how sweet is Your unchanging goodness and everlasting promises in Christ! Yet how bitter is Your judgment of sin and the adversity that You allow in our lives to make us more like Jesus. Like John, we also have a crucial role to play in Your prophetic plan. You have entrusted us to make disciples of all the nations by preaching Your gospel of grace to all who will listen and then training believers to grow in discipleship relationships. Please remove any resistance in our hearts to Your plan and purpose for our lives. We beg You to open doors for Your gospel to spread throughout this world and for believers in Jesus to multiply disciples until all hear His gospel message. In Jesus’ mighty name, we pray. Amen.