This video is about the everlasting hope that is found in the risen Lord Jesus Christ. Why do millions of people around the world celebrate Easter? What evidence is there that Jesus Christ is alive today? Discover the answers to these questions and much more. Please share this video with those you want to see in heaven.

Scripture are from the New King James Version unless otherwise noted. The song “Because He Lives I Can Face Tomorrow” by Jesusman, is Public Domain Mark 1.0 and is therefore not subject to copyright. Pictures are used with permission from Good News Productions International and College Press Publishing/ www.Freebibleimages.org, www.Goodsalt.com, or they are creative common licenses. 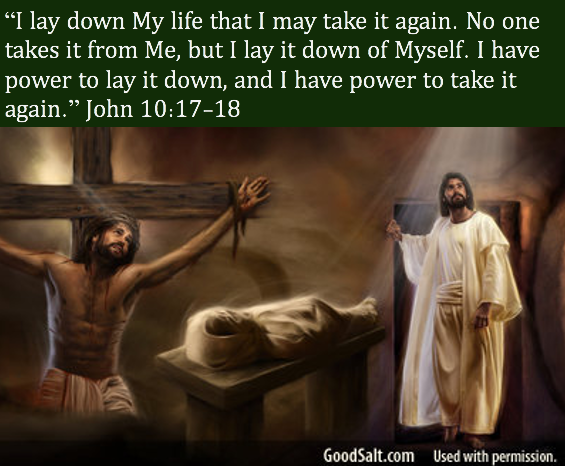 We can also grow closer to the Good Shepherd when we INITIATE OBEDIENCE TO HIM (John 10:17-18). Jesus said, “Therefore My Father loves Me, because I lay down My life that I may take it again.” (John 10:17a). God the Father has a special love for His Son who sacrificially obeyed His will. Jesus did not mean that the Father’s love resulted from the Son’s performance. The Father’s love for Jesus would still have existed if Jesus had failed to obey Him completely. The Father loved the Son unconditionally in eternity past (John 17:23-24). However, the Son’s full obedience to the Father’s will resulted in the Father having a special love for the Son that obedience under testing brought out.

Likewise, God loves all believers unconditionally, but when they obey Him, they enjoy an intimacy with Him that only obedience can produce. Christ said in John 14:21, “He who has My commandments and keeps them, it is he who loves Me. And he who loves Me will be loved by My Father, and I will love him and manifest Myself to him.” For Christ to disclose or “manifest” more of Himself to a believer, the believer must be trustworthy and obey Him. Intimacy or friendship with Christ is conditioned upon obeying Him. “You are My friends if you do whatever I command you.” (John 15:14). This friendship refers to Jesus disclosing His thoughts to those who obey Him. Thus, Jesus’ friends are those to whom He entrusts Himself. Intimate fellowship with Christ requires obedience to Him. When believers initiate obedience to Christ, they draw closer to Him and experience an intimacy with Him that is absent among disobedient believers.

Some people may ask, “If Jesus is God, how can He die? God does not die.” I like to respond to this question by asking a question. “When humans die, do their spirits or souls stop existing?” They respond, “No our spirit or soul does not die,” to which I reply, “So even when we die as humans, it is the body that dies, not our spirit or soul. We do not stop existing altogether.” The same is true of Jesus. Though His physical body died on the cross, He did not stop existing as God. Just before Jesus died on the cross, He cried out with a loud voice, “Father, into Your hands I commit My spirit.” Then “He breathed His last” (Luke 23:46). John writes, “bowing His head, He gave up His spirit” (John 19:30). Jesus’ spirit went to His Father in heaven when He died. Therefore, He did not stop existing as God.

Then Jesus said to His Jewish audience, “I lay down My life that I may take it again.” (John 10:17b). The purpose of Jesus’ death was to rise again, enriched with resurrection power. From Jesus’ perspective, death was only the beginning, not the end. Christ knew He would not remain dead. Christ said, “No one takes it from Me, but I lay it down of Myself. I have power to lay it down, and I have power to take it again. This command I have received from My Father.” (John 10:18). We see that Jesus’ death was voluntary (cf. John 10:11, 14, 17-18). Jesus was under no obligation to sacrifice Himself for sinners. That’s why it’s called grace.

Although the Jews would hand Him over and the Romans would crucify Him, this was only possible because He let them (cf. John 19:10-11). An unbelieving observer may conclude that Jesus was overpowered by the Jewish authorities and crucified. But Jesus makes it clear that no one took His life from Him. He chose to lay it down. He also had authority to lay down His life and take it up again. Christ had the power to call upon thousands of angels to destroy His enemies and deliver Him from death (Matt. 26:53), but He chose to endure the cross out of love for us and His Father (Romans 5:8; Philippians 2:6-8). The Father commanded Jesus to lay down His life and take it up again and Jesus submitted to His Father.

Anyone can lay his or her life down in death sacrificially, but only Jesus Christ could “lay it down” and then “take it [up] again” in resurrection! This is what separates Jesus Christ from all other religious leaders and founders. All other religious leaders and founders in history are still dead in the grave. But Jesus Christ is the only One who had the authority to take up His life in resurrection, proving that He is God (Romans 1:4) and that He has defeated sin, death, and the Devil (cf. Romans 6:5-14; 8:11; I Corinthians 15:54-57; Colossians 2:15; Hebrews 2:14-15). The New Testament writers attributed Jesus’ resurrection to all three members of the Trinity: the Father (Romans 6:4), the Son (John 2:19), and the Spirit (Romans 8:11).

The One Who voluntarily laid down His life for us and took it up again in resurrection loves each of us very much. He wants to give us the same power that raised Him from the dead to enable us to live a life that obeys and honors Him (cf. Ephesians 1:18-20)! The more we give Him our obedience, the more He will reveal Himself to us in intimate ways.

Prayer: Lord Jesus, there is no one like You. You loved me so much that You voluntarily laid down Your life for me and took it up again in resurrection to honor Your Father’s will. Your obedience to the Father reminds me that when I give You my obedience, You will reveal more of Yourself to me. Right now my Lord and my God, I want to give You everyone and everything I have. I look forward to what You are going to teach me about Yourself today. In Your everlasting name I pray. Amen.