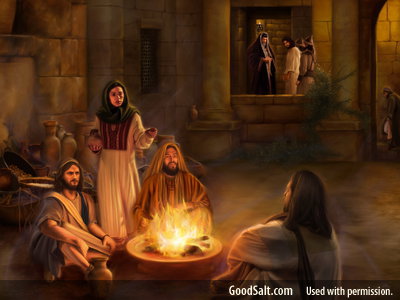 Before we look at these verses, I want to point out that discipleship is a lifelong process which includes periods of failure in our lives. If you recall, Peter had already vowed to lay down his life for Jesus’ sake when he was in the Upper Room with Christ and the other disciples (John 13:37). But Jesus then said to Peter, “Will you lay down your life for My sake? Most assuredly, I say to you, the rooster shall not crow till you have denied Me three times.” (John 13:38). Keep in mind that Peter had already believed or trusted in Jesus for eternal life about 3 ½ years earlier (cf. John 1:40-2:11). He was already a Christian. But Christ says to Peter there is going to be a period of time when he is going to deny knowing Jesus “three times.”

When Jesus was arrested in the Garden of Gethsemane, the disciples fled (Matthew 26:56) except Peter and another disciple, who followed at a distance as Jesus was led to the house of Annas. “And Simon Peter followed Jesus, and so did another disciple. Now that disciple was known to the high priest, and went with Jesus into the courtyard of the high priest.” (John 18:15). The phrase “another disciple” implies that Peter was also a disciple even though he was following Jesus from a distance (Matthew 26:58). ﻿“This unnamed disciple was John, the author of the Gospel. John never identifies himself by name but typically ﻿calls himself ‘the disciple Jesus loved.’ (see 13:23; 19:26; 20:2).” 1  Since John “was known to the high priest,” he was able to gain access to the courtyard in front of Annas’ house.

“But Peter stood at the door outside. Then the other disciple, who was known to the high priest, went out and spoke to her who kept the door, and brought Peter in.” (John 18:16). Because of John’s acquaintance with the high priest, he was able to secure Peter’s entrance into the courtyard. “Then the servant girl who kept the door said to Peter, ‘You are not also one of this Man’s disciples, are you?’ He said, ‘I am not.’ ” (John 18:17). The servant girl on duty at the door of the courtyard may have known John was a follower of Jesus and suspected Peter was also. Or perhaps it was Peter’s hesitance that gave him away. Regardless, her question expects a negative answer and made it easy for Peter to say no. Peter was afraid to identify himself as a disciple of Jesus because of unfamiliar surroundings and the presence of the temple guards and religious leaders. So he said, “I am not!” The negative particle (ouk) is in a place of emphasis. Peter was saying, “No, not me!” 2

What has happened to this man who vowed to die for Jesus’ sake earlier (John 13:38) and courageously tried to defend Jesus when he cut off the ear of the high priest’s servant in the Garden of Gethsemane (John 18:10)? We can tend to be hard on Peter for his denials of Jesus, but who has not had a similar failing? Peter was facing a dangerous situation. He had cut off the ear of the high priest’s servant and no doubt feared being seen by him or by the temple officers who accompanied him. So he panicked and lied. Many of us have lied rather than be embarrassed or discovered. Are we still disciples when we fail the Lord like this?

I believe the apostle John would say, “Yes!” Here is why. In these verses John writes “Peter followed… and so did another disciple” (John 18:15) – this means Peter is a disciple even though he is following Jesus from a distance. When John refers to himself as “the other disciple” (John 18:16), he is implying that both he and Peter are disciples. And when John records the servant girl’s question, “…are you one of this Man’s disciples?” he is suggesting that the girl is identifying Peter as Christ’s disciple. Even when Peter denied Jesus Christ, he is still following Him, albeit from a distance.

“Now the servants and officers who had made a fire of coals stood there, for it was cold, and they warmed themselves. And Peter stood with them and warmed himself.” (John 18:18). Jerusalem is located in the Judean mountains, two thousand feet above sea level, and spring nights, especially without cloud cover, can be quite cool. To take off the chill, a fire was burning in the courtyard. Peter joined the servants of the high priest and other officials, and warmed himself by the fire. When John says “it was cold,” he may be referring to more than the air temperature. Peter’s heart was cold, too.

It is also worth noting that the same Greek word translated “fire of coals” (anthrakia) is only used one other time in the gospel of John. When it shows up again in John 21:9, Peter’s life will be dramatically changed by the restoring love of the Lord Jesus Christ, and so might yours.

I believe there are two reasons why Peter failed to publicly identify with Jesus in these verses. One was because he was following Christ from a distance (John 18:15-16; cf. Matthew 26:58). In the Garden of Gethsemane, Peter was close to Jesus’ side and felt confident next to Christ. But in the courtyard, distance separated him from Jesus and his faith faltered due to this separation. Self-reliance had distanced Peter from his Lord. Remember how Peter vowed to lay down his life for Jesus in the Upper Room? He did not say, “By Your grace or with Your help, I will lay down my life for You, Jesus.” No, Peter said, “I will lay down my life for Your sake.” (John 13:36). Instead of relying on Jesus for the courage he needed to identify with Him, Peter was relying on himself and he failed his Lord when given the opportunity to publicly confess that He knew Him.

Another reason why Peter refused to publicly identify with Jesus is because he sat down in the company of Jesus’ enemies (John 18:18). Instead of warming up against Jesus, Peter warmed up against Christ’s enemies around the fire in the courtyard. When we closely associate with those who are against a crucified Christ, we will lose our spiritual vitality over time. If we spend all our time listening to people undermine the Lord Jesus or the reliability of the Bible, we will become prone to doubt our Christian faith.

Sometimes we set out to follow Jesus and we may run into hard times and publicly deny our discipleship relationship with Christ because we are relying on ourselves instead of the Lord or we are spending more time with Jesus’ enemies instead of with Jesus Himself. This leads to our second principle: We can overcome failure when we  REMAIN CLOSE TO CHRIST AND OTHER COMMITTED DISCIPLES (John 18:15-18). If we are spending more time with Jesus’ enemies than we are with Christ or His followers, we are going to be less prepared to speak up for Christ when religious hatred is directed at us. Only Jesus can give us the courage to face His enemies.

If we neglect to meet with other believers in Jesus we will be less prepared to publicly identify with Christ when faced with opposition. Satan wants Christians to withdraw from other believers so he can attack them and destroy them much like a lion that preys upon animals that are isolated from the herd and more vulnerable to attack (cf. I Peter 5:8). But God wants us not to forsake “assembling ourselves together, as is the manner of some,” so we can focus on “exhorting one another” in such a way as to encourage and strengthen each other to persevere in the Christian faith (Hebrews 10:24-25). After all, the Bible warns us, “Do not be deceived: Evil company corrupts good habits.” (I Corinthians 15:33). We cannot make unbelievers our constant, intimate companions and think we will remain unscathed. If we constantly and closely associate with those who deny the Person and work of Christ or the reliability of the Bible, we are going to begin to doubt our faith and be less prepared to stand up for Jesus in the face of persecution.

Prayer: Lord Jesus, there is a part of Peter in all of us who are Your disciples. We can make promises to You and fail to keep them because we are relying on ourselves instead of You or because we are spending more time with Your enemies instead of with Your followers. Thank You for showing us that even if we follow You from a distance and fail to publicly identify with You, we can still be Your disciples. May we never become so proud that we conclude we could never fail You like Peter did. Help us to learn from his mistake and stay close to You and those who follow You. We are living in a world that is trying to keep Christians from gathering together to encourage one another in their pursuit and worship of You. Please make a way for us to connect with one another as often as possible. We need You, Jesus, and we need our brothers and sisters in Christ. Thank You, for always being with us and never abandoning us. In Your name we pray. Amen.