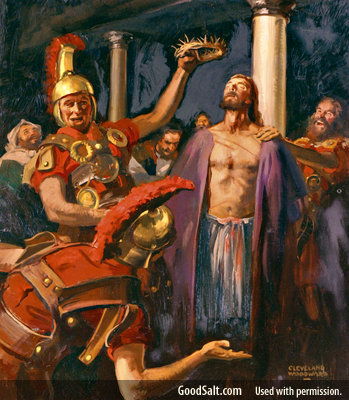 “2 And the soldiers twisted a crown of thorns and put it on His head, and they put on Him a purple robe. 3 Then they said, ‘Hail, King of the Jews!’ And they struck Him with their hands.” John 19:2-3

The Bible tells us, “For the message of the cross is foolishness to those who are perishing, but to us who are being saved it is the power of God.” (I Corinthians 1:18). The cross of Christ does not make sense to the unbeliever.

“What would you think if a woman came to work wearing earrings stamped with an image of the mushroom cloud of the atomic bomb dropped over Hiroshima?

“What would you think of a church building adorned with a fresco of the massed graves at Auschwitz? . . .

“The same sort of shocking horror was associated with the cross and crucifixion in the first century.” 1

We are learning from John 18:28-19:3 how various people respond to Christ crucified. Some of us are…

– Like the Jewish leaders, we may refuse to believe in Jesus because of our self-righteous religious pride (John 18:28-32).

– Like Pilate, we may refuse to believe in Jesus because we are too busy with life to truly live (John 18:33-38a).

There is a fourth possible response to Christ crucified and it is seen at the beginning of John 19. LIKE THE ROMAN SOLDIERS, WE MAY REFUSE TO BELIEVE IN JESUS BECAUSE WE ARE NOT CONCERNED ABOUT ETERNAL THINGS (John 19:1-3). Although the Jewish leaders sought the death penalty for Jesus (John 18:31), Pilate recognized Jesus had done nothing deserving of execution (John 18:38). In Chapter 19, John continues the account of Jesus’ trial before the Roman governor, Pontius Pilate. Pilate wanted to release Jesus but he did not want to offend the Jewish leaders who were determined to put Jesus to death. The trial of Jesus before Pilate was rapidly reaching a crisis that Pilate wanted to avoid. In an effort to satisfy the Jews, Pilate ordered that Jesus be flogged. “So then Pilate took Jesus and scourged Him.” (John 19:1).

Pilate may have done this thinking that once the Jews saw Jesus in such a beaten state, they would ask for His release. But what is a scourging? Is it merely a beating with a whip? To make such an association is like comparing an electric shock to a lightning bolt.

“Scourging was a standard preliminary to a Roman execution. Only women, Roman senators, or soldiers (except in cases of execution) were exempt. The victim was stripped, bound to a post, and then beaten with a short whip, or flagellum, made of braided leather thongs to which were attached small iron balls and sharp pieces of bone. Jewish law limited scourging to thirty-nine strokes (M. Makkoth 3:10). Because this was a preliminary to execution, care was taken not to kill the victim. Yet suffering under the scourge was intense. Josephus tells of a man whose bones were laid bare by scourging (Jewish Wars 6.303-4). Eusebius reports of how veins, arteries, entrails, and organs were exposed to sight by the scourge (Historia Ecclesiastica 4:15).” 2

The soldiers also placed a “purple robe,” normally worn by military officers or men of high rank, on Jesus. “Then they said, ‘Hail, King of the Jews!’ And they struck Him with their hands.” (John 19:3). They mocked Jesus as they greeted Him with the words, “Hail, King of the Jews!” Then they became physically abusive and struck Jesus with their hands. Matthew and Mark also report that they hit Jesus on the head with a stick and knelt before Him and spat on Him (cf. Matthew 27:30; Mark 15:19). ﻿“Though Pilate and the soldiers no doubt thought they were merely exercising the might of Rome over a simple Jew, they were actually fulfilling biblical prophecy about the Messiah in detail” 4 (cf. Isaiah 50:6; 53:5).

While this mistreatment of Jesus is repulsive to us, we have also observed similar experiences in the news where prisoners in America are brutally treated by law enforcement officers or prison guards. But before we condemn them, we need to ask ourselves what we would do if we were in a similar situation. For example, if someone had killed our co-workers, would we want to avenge their deaths? Or if someone sought to kill us, would we be all calm and collected or would we want to retaliate?

These Roman soldiers did not deliberately reject Jesus like the Jewish leaders did. They probably were not familiar with the Hebrew Scriptures that pointed to Jesus as the promised Messiah of Israel. Like a lot of people today, they were not religious. Their job required them to scourge and crucify prisoners often. Perhaps they were simply having fun to decrease the monotony of their profession. 5  Or maybe they were trying to distance themselves from the human suffering they were causing to their prisoners much like a doctor or nurse that works in an emergency room dealing with constant trauma. They must distance themselves emotionally from those for whom they provide medical care.

Perhaps you can identify with Roman soldiers who were not interested in eternal matters, but who were simply living for their jobs and trying to have some fun at the same time. It is important to understand “that the issue is not, ‘Is there a hereafter?’ The real issue is, ‘Is Jesus Christ the One He said He was?’ Why? Because Jesus Christ is the One who spoke more about heaven and hell than any other man in the Bible.

“He spoke about heaven when He said, ‘Let not your heart be troubled; you believe in God, believe also in Me. In My Father’s house are many mansions; if it were not so, I would have told you. I go to prepare a place for you. And if I go and prepare a place for you, I will come again and receive you to Myself; that where I am, there you may be also’ (John 14:1-3). He spoke about hell when He said, ‘And do not fear those who kill the body but cannot kill the soul. But rather fear Him who is able to destroy both soul and body in hell’ (Matthew 10:28).” 6

So if you do not believe there is a hereafter, please realize that Jesus Christ believed there was a hereafter and the Bible explains that Jesus is “the way” to that hereafter (John 10:9; 14:6; Acts 4:12). But if Jesus Christ was not who He said He was, what He taught about the hereafter does not matter.

Just as history proclaims that George Washington was the first President of the USA, so history proclaims that Jesus Christ was resurrected from the dead. Just ask former atheists, Josh McDowell and Lee Strobel, who set out to disprove the resurrection of Christ only to be persuaded by the historical evidence that Jesus did indeed rise from the dead. You can check out the evidence that persuaded them to believe in Jesus in their books (McDowell – The New Evidence that Demands a Verdict 1999/The Resurrection Factor 1981; Strobel – The Case for Easter Revised 2013).

You may not care about the hereafter because you do not view heaven as a very exciting place. For example, George Bernard Shaw, once explained, “Heaven as conventionally conceived, is a place so inane, so dull, so useless, and so miserable that nobody has ever ventured to describe a whole day in heaven, though plenty of people have described a day at the seashore.” (~ Harlan D. Betz, Setting the Stage for Eternity) 8

Don’t go by your perception of heaven. Go by the explanation the Bible gives. “1 Then I saw a new earth (with no oceans!) and a new sky, for the present earth and sky had disappeared. 2 And I, John, saw the Holy City, the new Jerusalem, coming down from God out of heaven. It was a glorious sight, beautiful as a bride at her wedding. 3 I heard a loud shout from the throne saying, ‘Look, the home of God is now among men, and He will live with them and they will be His people; yes, God Himself will be among them. 4 He will wipe away all tears from their eyes, and there shall be no more death, nor sorrow, nor crying, nor pain. All of that has gone forever. 5 And the One sitting on the throne said, ‘See, I am making all things new!’ And then He said to me, ‘Write this down, for what I tell you is trustworthy and true: 6 It is finished! I am the A and the Z—the Beginning and the End. I will give to the thirsty the springs of the Water of Life—as a gift!” (Revelation 21:1-6 TLB).

“﻿Every molecule, atom, proton, and neutron in existence today will disintegrate only to be replaced by a glorious new creation… ﻿The idea that God will make everything new may seem too spectacular to be true, but He says this promise is indeed faithful and true (21:5). His people will experience complete satisfaction in the new creation, symbolized here by the metaphor of thirst being quenched from the spring of the water of life (21:6). The refreshing satisfaction of downing a cold glass of water when you’re parched is nothing compared to the spectacular satisfaction to come.” 9

Would you like to live forever in a perfect, problem-free place called heaven? If so, understand that Jesus Christ is the only way to get there (John 10:9; 14:6). You may ask, “Why?” Because only Jesus Christ has paid the price of admission into His heaven when He died in our place on a cross and rose from the dead (John 19:30).

You may ask, “Why did Jesus have to die for me?” Because the Bible tells us that our sin – the wrong things we do, say and think – separate us from God (Romans 3:23; 6:23). In fact, if we were to pay the price for our own sin, we would spend eternity in a terrible place called the lake of fire (Revelation 20:15). But Jesus loved us so much that He took our place and punishment on the cross, was buried, and then rose again (Romans 5:8; I Corinthians 15:3-6).

The Lord Jesus now invites you to trust in Him alone for His gift of eternal life. Jesus said, “He who believes in Me has everlasting life.” (John 6:47). This requires faith and humility on your part. Faith to believe that God really loves you and will give you eternal life, and humility to admit that He is God and you are not.

As a drowning person must trust a lifeguard to save them through no effort of their own, so you must place your trust in a Person – Jesus Christ – as your only way to heaven. The good things you have done will not get you to heaven. Only Jesus can save you from your sins. The moment you place your trust in Him for eternal life, you can be certain that you will live with Jesus forever in His glorious heaven.

Prayer: God, some of us reading this today may have thought that this life on earth is all there is. Like the Roman soldiers, we may not have cared about Jesus Christ or the hereafter. We were more interested in living for our jobs and having a good time. But now we are beginning to wonder if that is the best way to approach life on earth. What if this person called Jesus of Nazareth really did claim to be God? What if it is true that He loves me and died in my place on a cross and rose from the dead, proving that He really is God? What if He is preparing an incredible place for those who believe in Him to live with Him for all of eternity? Do I really want to risk missing out on all of that? As best I know how, God, I am asking You to show me if Jesus Christ is the real deal? Thank You.

To learn more about Jesus, please explore this website or www.knowing-Jesus.com.