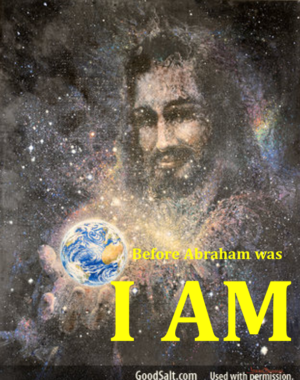 – Ask those who oppose Christ to believe in His promise of eternal life (John 8:51-53)

The fifth and final way we can overcome opposition to the truth about Jesus is to… AMPLIFY JESUS’ CLAIMS (John 56-59). Earlier Jesus’ unbelieving audience said to Him, “Are You greater than our father Abraham, who is dead? And the prophets are dead. Who do You make Yourself out to be?’” (John 8:53). Jesus will now reveal to them how much greater He is than Abraham and all the prophets. “Your father Abraham rejoiced to see My day, and he saw it and was glad.” (John 8:56).

Their father Abraham had a preview of Jesus’ “day.” On more than one occasion, Abraham encountered the preincarnate Jesus Christ (Genesis 15:1-21; 17:1-22; 18:1-33). When Abraham offered up his beloved son, Isaac (Genesis 22:1-18), he received an object lesson of Christ’s coming death and resurrection. Hebrews 11:17-19 informs us, “17 By faith Abraham, when he was tested, offered up Isaac, and he who had received the promises offered up his only begotten son, 18 of whom it was said, ‘In Isaac your seed shall be called,’ 19 concluding that God was able to raise him up, even from the dead, from which he also received him in a figurative sense.” Abraham was willing to sacrifice his only son, Isaac, because he believed God could raise him from the dead. Hence, the physical ancestor of Jesus’ critics, Abraham, looked forward by faith to Jesus’ death and resurrection when he offered up Isaac. He rejoiced in anticipation of Jesus fulfilling the promise to him in Genesis 12:3, “And in you all the families of the earth shall be blessed.” Jesus is claiming to have fulfilled what Abraham looked forward to.

Christ’s critics’ overlook the fact that Jesus is God and say, “You are not yet fifty years old, and have You seen Abraham?” (John 8:57). “A man not yet fifty years old could not have been seen by Abraham.” This does not mean Jesus was close to fifty years of age. Luke tells us that Jesus was thirty years old when He began His ministry (Luke 3:23) and it only lasted about three and one-half years. The main point of Christ’s critics’ is that it was unthinkable to suggest that Abraham could have seen Christ’s “day”since over two thousand years separated these two men.

Christ responds to their skepticism with one of His most profound claims to be God. “Most assuredly, I say to you, before Abraham was, I AM.” (John 8:58). The verb, “was” (genesthai), is in the aorist tense and means “entrance into existence.” The verb translated, “I AM” (eimi), is in  the present tense and means, “continuous existence.” Jesus is saying, “Before Abraham came in to being, I eternally was, am, and will ever be.” Jesus could have said, “Before Abraham was, I was.” That would simply have been a claim of preexistence. But Jesus did not say that. What He said was very clear. Jesus was not only claiming to have existed before Abraham two thousand years ago, but He was also claiming to be the eternal “I AM.”

﻿When Moses asked God his name so that he could tell the Israelites who had sent him to them, “God said to Moses, ‘I AM WHO I AM.’ And He said, ‘Thus you shall say to the children of Israel, ‘I AM has sent me to you.’ ” (Exodus 3:14). Thus, Jesus identified himself as the God who had spoken to Moses. Jesus is the One who redeemed Moses and Israel out of Egypt! “I AM” is an emphatic form of speech and could not be normally employed in ordinary conversation. Jesus was claiming to be the Self-existent God. That is an amazing assertion. But it simply confirms what John has already said, “The Word [Jesus Christ – 1:14, 17] was with God, and the Word was God.” (John 1:1).

Many attempts have been made to describe eternity. One such attempt states “imagine a steel ball the size of the earth. The amount of time it would take an ant to walk around the earth so many times to wear a groove through to the point of cutting the ball in half” is only a fraction of eternity. Jesus said, “I am the Alpha and the Omega, the Beginning and the End.” (Revelation 1:8). Jesus is without beginning and without end because He is the eternal “I AM.” To be in a personal relationship with an eternal God, we must receive His eternal life. We do this by believing in Him. Jesus said, “And as Moses lifted up the serpent in the wilderness, even so must the Son of Man be lifted up, that whoever believes in Him should not perish but have eternal life.” (John 3:14-15). If we want to live forever with God the Son, Jesus Christ, we must receive His forever life by believing in Him alone (not our prayers, religion, or good life), for His free gift of everlasting life and a future home in heaven.

The Jews’ response to Christ’s claim is telling: “Then they took up stones to throw at Him; but Jesus hid Himself and went out of the temple, going through the midst of them, and so passed by.” (John 8:59). To the Jews this was blasphemy, meaning they understood Jesus to claim to be God. Thus, they prepared to stone Christ in accordance with Leviticus 24:16. Ironically the Jews were not willing to stone an adulteress (John 8:9), but now they were willing to stone their Messiah-God (John 8:59)!

In May of 2015, when I was in northern Mindanao of the Philippines, we did some house-to-house evangelism in a neighborhood close to my host family’s church. Two of the women we shared with were Jehovah Witnesses. When they tried to persuade us that Jesus never claimed to be God, I pointed them to John 8:59, and asked them, “Why did the Jews want to stone Jesus?” They paused and just stared at me. When they would not answer my question, I answered it for them. “They took up stones to throw at Jesus because they understood His claim to be God. That is what blasphemy means. If the Jews could understand that Jesus claimed to be God, why can’t you?” Again, they were silent. I then said to them, “You are not able to understand and accept Jesus’ claim because you do not have God the Holy Spirit to give you that understanding. Jesus loves you and wants to give you everlasting life. He simply asks you to believe in Him for His free gift and He will save you forever from your sins and come to live inside you through His Spirit.”

When the Jews took up stones to throw at Jesus we are told, “but Jesus hid Himself and went out of the temple, going through the midst of them, and so passed by.” (John 8:59b). The word “hid” is in the passive voice and means “was hidden.” Christ was protected by His Father. It was not the Father’s time yet for His Son to die. The Light of the world now “went out of the temple” leaving His countrymen behind to go to people in general, represented by the man born blind (John 9).

I am reminded of the Civil War General “Stonewall” Jackson who received his nickname at the First Battle of Manassas on July 21, 1861, by Confederate General Bernard Bee. Inspired by Jackson’s courage in the face of the enemy, Bee called out to his men to inspire them: “Look, men! There is Jackson standing like a stone wall!” Regarding his faith in God, Jackson said it mattered not if he were exposing himself to danger in battle or cowering in bed, when God’s chosen time came for him to die, he would die and not until then. His courage was based upon this belief in God’s timing for him to die. Until that time came, no one could kill him. It was this bravery that compelled his men to follow their leader into battle.

Likewise, until God says it is time for a Christian to go home to be with the Lord Jesus in heaven, no one can take his or her life. Knowing this, can give believers great courage when faced with opposition to the truth about Jesus – the Eternal I AM.

Lord William Russell knew this truth about the Lord Jesus Christ very well. When on the scaffold about to be beheaded, he took his watch from his pocket and gave it to Dr. Burnett, who was attending him, and said, “My timepiece may be of service to you. I have no further occasion for it. My thoughts are fixed on eternity.” Knowing the Eternal, I AM – Jesus Christ –  prepares us for eternity.

Are you ready to face death? Do you have peace with God through the Lord Jesus Christ (Romans 5:1)? If not, you can receive the forever life of Jesus Christ, the Eternal I AM, right now by believing His promise, “that whoever believes in Him should not perish but have everlasting life.” (John 3:16). If you now understand and believe His promise, you can tell Him this through prayer.

Prayer: Dear Lord Jesus, I now understand that You are the Eternal I AM Who was, is, and will ever be. You are so much greater than Abraham and all the prophets from Adam to John the Baptist. I now realize that I have sinned against You with my thoughts, words, and actions. I cannot save myself to enter Your heaven. I believe You died for all my sins on a cross and rose from the dead. You are alive today! Lord Jesus, I am now believing or trusting in You alone (not my religion, my good life, or my prayers) to forgive all my sins and give me Your eternal life that never ends and can never be lost. Thank You, Jesus, for the complete forgiveness and never ending life I now have. Thank You for the future home I will have in Your heaven. Please give me the courage to share this wonderful news with all who will listen. In Your name. Amen.