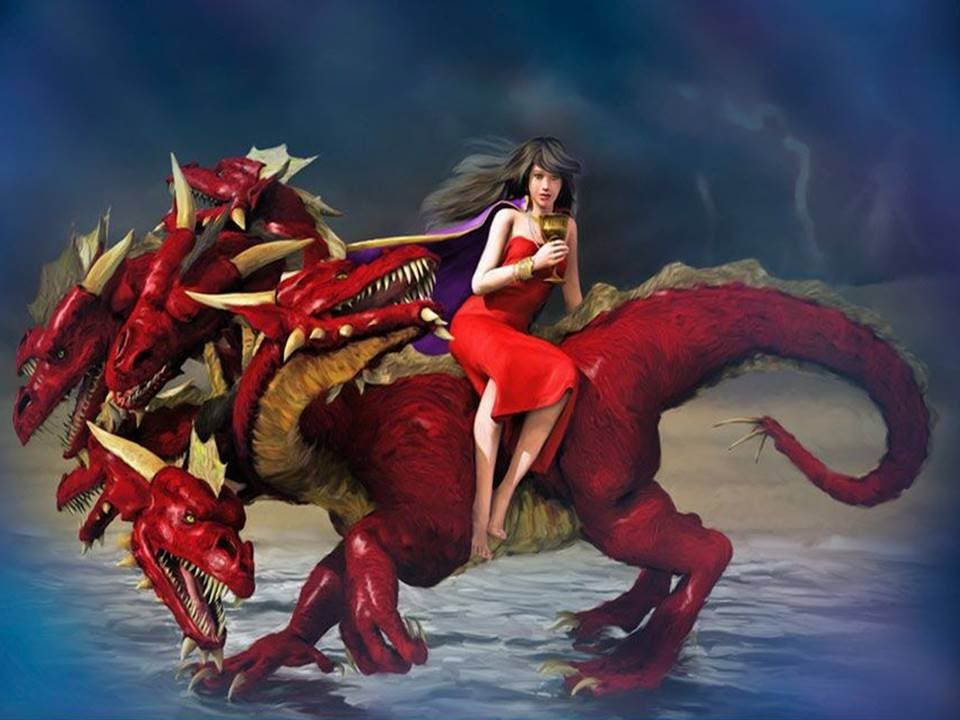 “Then he said to me, ‘The waters which you saw, where the harlot sits, are peoples, multitudes, nations, and tongues.’” Revelation 17:15

After the angel explained the interpretation of “the mystery” about “the beast” (17:7-14), he addressed the meaning of “the woman” riding on the beast (17:15-18). “Then he said to me, ‘The waters which you saw, where the harlot sits, are peoples, multitudes, nations, and tongues.’” (Revelation 17:15). The angel interprets “the waters which” John “saw, where the harlot sits” (17:1) to be “peoples, multitudes, nations, and tongues” indicating the worldwide evil influence Rome will have during the Tribulation period. During the Tribulation “there will be one ecumenical world religious system, embracing all nations and languages.” 1

So, the woman riding on the scarlet beast represents a worldwide religious system in the Tribulation period whose headquarters is in Rome, the city on seven hills (17:1-9, 15). Rome will be the center of the Revived Roman Empire during the Tribulation period. Rome is also home to the Vatican, the Roman papal authority whose influence reaches across the world to “peoples, multitudes, nations, and tongues.” This worldwide false religion will be brought to a sudden stop around the mid-point of the Tribulation period.

“And the woman whom you saw is that great city which reigns over the kings of the earth.” (Revelation 17:18). The angel interprets “the woman” whom John saw to be “that great city which reigns [present tense] over the kings of the earth.” In the first century context when John wrote the book of Revelation, this could only refer to the city of Rome which ruled the world at that time. 5 Just as Rome relentlessly persecuted believers in Jesus when John wrote in the first century, the revived Roman Empire in the Tribulation period will also persecute believers who refuse to submit to her evil and idolatrous practices. But this persecution will be short lived because God will use the beast and his allies to bring about the swift destruction of this evil worldwide false religion.

These events in Revelation 17 could begin to take place at any time once the church of Christ is removed via the Rapture (I Thessalonians 1:9-10; 4:13-5:11; Revelation 4:1-4). Jesus said, “32 But of that day and hour no one knows, not even the angels in heaven, nor the Son, but only the Father. 33 Take heed, watch and pray; for you do not know when the time is.” (Mark 13:32-33). Christ said no one knows the “day and hour” of His coming, yet as we see conflict between Russia and Ukraine and chaos increasing around the world, the stage is being set for the beast to arise out of the chaos. Christians are to “watch and pray,” devoting their full attention, while there is still time, to God’s agenda for themselves, their families, their churches, and their communities. 6

Nonbelievers would be wise to come to Jesus Christ in faith soon before they are left behind to face a world that will experience unprecedented judgments as never before seen. If you are not sure you will go to heaven in the future, listen to what missionaries said to a prison guard who thought he only had a short amount of time to live. They told him, “Believe on the Lord Jesus Christ, and you will be saved” (Acts 16:31).

The reason a person must believe or trust in the Lord Jesus alone is because we all have a problem called sin (Romans 3:23) that separates us from God (Romans 6:23). All of us have sinned against God with our thoughts, words, and actions. And we all deserve to pay the penalty for our own sins by dying forever in a terrible place of eternal suffering called the lake of fire (Revelation 20:15) or hell (Mark 9:43-48). But God does not want any of us to die forever in hell!

So, He sent His only perfect Son, Jesus Christ, to earth two thousand years ago. Jesus lived a perfect life on earth (Hebrews 4:15), and then He died on the cross in our place to pay the penalty for all our sins (I Corinthians 15:3; John 19:30). The proof that He died is that He was buried (I Corinthians 15:4a). We do not bury a living person; we bury a dead person. Jesus then rose from the dead three days after He died (I Corinthians 15:4b) just as He promised He would (Matthew 16:21), proving that He is God (John 3:16; Romans 1:3-4). The proof that Jesus rose from the dead is that He was seen alive after His death by over five hundred eyewitnesses (I Corinthians 15:5-8). This is more than enough evidence to stand up in a court of law.

Jesus is alive today and He has the power to save us from hell forever and give us eternal life which can never be lost (John 10:28-29). He now invites everyone to believe in Him alone to save them from hell forever (Acts 16:31). To “believe” in Jesus means to trust or depend upon Him alone.

Trusting in Jesus is a lot like riding on an airplane. When you ride as a passenger on an airplane, do you need to push the airplane to get it off the ground? No, of course not. Do you need to flap your arms to keep the plane in the air? No. All you must do is trust a person, your pilot, to take you to your destination.

In the same way, Jesus does not need us to help Him save us from hell forever. No amount of our good works can save us from the lake of fire because they are all stained with sin before a holy God (Isaiah 64:6; Ephesians 2:8-9). All Jesus asks is that we believe or trust in Him alone to save us from hell forever (Acts 16:31) and give us everlasting life (John 3:16). Only Jesus can take away our sins because He paid the penalty of our sins in full (John 19:30) and rose from the dead. Believe in Him and the Bible guarantees “you will be saved” forever from hell (Acts 16:31).

Prayer: Dear Jesus, I come to You now as a sinner. I cannot save myself from hell. I believe You died for all my sins on the cross and rose from the dead. I am now trusting in You Jesus (not my good life, my religion, nor my prayers), to save me from hell forever and give me everlasting life. Thank You, Lord Jesus, for the gifts of Your salvation and everlasting life that I now have. In Your mighty name I pray, Lord Jesus. Amen.

When you believed in Jesus…

– He now wants you to follow Him so He can show you how to tell other people the good news of going to heaven through faith in Him alone (Matthew 4:19; Mark 16:15).

Because of your faith in Christ alone to save you from hell forever, I will not say good-bye to you. Instead, I will say, “See you in heaven!”