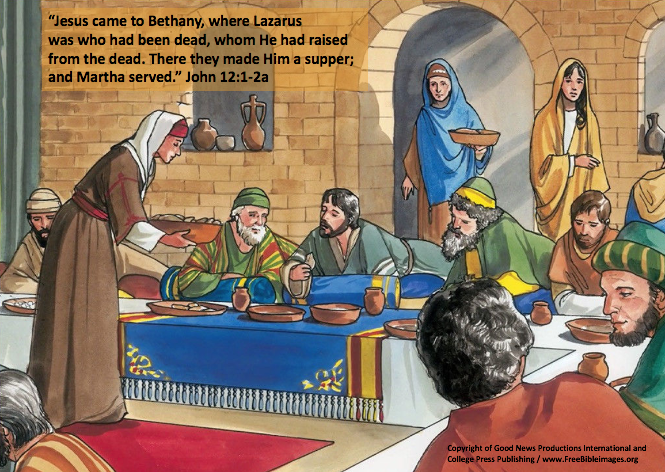 “Jesus came to Bethany, where Lazarus was who had been dead, whom He had raised from the dead. There they made Him a supper; and Martha served.” John 12:1-2a

American financier George A. Kessler had a passion for unusual parties. All the wealthy guests at a “hobo dinner” were required to wear tattered clothing and eat out of cans. On another occasion, his guests sat down to dinner in an airship hovering over the Atlantic Ocean. His most extravagant party, however, was held at the Savoy Hotel in London on June 30, 1905, in honor of King Edward VII.

This was the famous Gondola Party, held in the old courtyard of the hotel. The doorways around the courtyard were sealed with putty, and the courtyard was flooded to a depth of three feet with water dyed blue to resemble the sea. Magnificent painted scenery around the sides of the courtyard represented buildings in Venice, and a huge (stationary) silk lined boat bobbed on the “canal,” surrounded by twelve thousand carnations and an enormous number of roses. Kessler’s twenty-four guests sat inside the gondola and enjoyed a twelve-course banquet prepared by fifteen master chefs and served by waiters dressed as gondoliers.

A bridge linked the boat to the hotel and the entire scene was illuminated by four hundred hand-made paper lamps. An additional touch was three impressive lions carved out of ice bearing trays of peaches and glace fruits while a throng of Gaiety Girls drank to the health of the king with expensive Champaign.

The evening’s entertainment featured the great opera singer Enrico Caruso; he performed an aria while a baby elephant with a five-foot-high cake strapped to its back was led across a gangplank to the gondola and one hundred white doves flew overhead. Unfortunately, it turned out that the blue dye was poisonous for both fish and birds, and the dead and dying creatures had to be quickly scooped out of the water and disposed of. The entire evening was organized by the hotel’s General Manager, Henri Pruger, and the total bill, paid for by Kessler came to £3,000 or over $14,000 at that time. 1

The next few days we are going to look at a more significant dinner which took place for a much more honorable King than any human monarch. The context of this dinner was about two to three weeks after Jesus withdrew from Bethany of Judea to escape the Sanhedrin who had plotted to kill Him after He raised Lazarus from the dead (John 11:45-53). While in Ephraim, Jesus ministered to His disciples (John 11:54). Christ had just finished a day of controversy in Jerusalem (Matthew 23), having completed His teaching about the Second Coming on the western slope of the Mount of Olives (Matthew 24-25). He now retired down the eastern slope to Bethany of Judea where He would have supper with some dear friends. From these verses in John 12:1-8, we will learn how we can honor only Jesus.

“There they made Him a supper; and Martha served.” (John 12:2a). The “they” probably refers to Martha, Mary, Lazarus, and Jesus’ disciples. They prepared “a supper” for Jesus to honor Him for raising Lazarus from the dead. The word “there” likely refers to the house of Simon the leper because Matthew and Mark record the same anointing by Mary and both of them inform us that this anointing took place in Simon the leper’s house (cf. Matthew 26:6-13; Mark 14:3-9).

However, this is not the anointing that took place in Simon the Pharisee’s house in Luke 7:36-50. That anointing took place in Galilee, but this one at Bethany of Judea. There the host despised the woman, here her brother and sisters are the guests. There the woman was a notoriously“bad” sinner, but here it is the devoted Mary who “sat at the Lord’s feet and heard His word” months before (Luke 10:39). There the host thought it strange that Jesus allowed her to touch Him, here the disciples complain of the waste. There the Savior gave assurance of forgiveness, here He gives assurance of the perpetual and worldwide honor that would accompany the preaching of the gospel. Especially notice here that the woman who anoints Jesus is anticipating His speedy death and burial but at the earlier anointing His death and burial are not mentioned. In view of all the differences, it is absurd to suggest that the anointing here in John 12 (cf. Matthew 26; Mark 14) is the same as the anointing in Luke 7.

Of special notice are the words “Martha served” (John 12:2a). The verb “served” (diēkonei) is in the imperfect tense and tells us that Martha acted in this way throughout the dinner. In Luke 10:38-42, Martha served fewer guests and was “distracted” and overcome with worry. Here she serves many more guests and there is not a word about her being distracted or troubled. Why? Because Martha had learned not to neglect Jesus in her ministry. Earlier she was distracted by all her preparations and had lost sight of Christ. Now she was occupied with the Lord Jesus and not just for Him. She had learned to keep her eyes on the Savior and not her duties.

It can be easy for us to lose sight of Christ and become preoccupied with things to do. After all, we think to ourselves that what we are doing is a good thing for the Lord. Ministry is a good thing; but when it replaces our Master it can become a burden. Me may engage in ministry activities to elevate our value. Or we can use ministry to avoid unwanted feelings in our lives. We convince ourselves to stay busy for the Lord as a way of medicating the uncomfortable emotions inside us. I believe this may have been what Martha did earlier in Luke 10:38-42.

But Martha learned a very important lesson that all of us can learn as well. She learned to become preoccupied with Jesus and what He had done for her brother, Lazarus. Instead of working for Christ, she worked with Him. Instead of focusing on what she did to determine her value, she looked to Jesus to determine her value. Instead of turning to ministry to avoid her feelings, she turned to her Master Who raised her brother from the dead and helped her face her unwanted emotions, resulting in a renewed passion to serve Christ.

Likewise, the more we focus on the Person and work of Christ, the more eager we will be to serve Him with thanksgiving by serving those He has placed in our lives. His performance on the cross determines our value, not our performance in ministry. As we grow closer to Him, we will discover that He already knows our feelings so there is no need to try to hide them from Him. He understands what is going on inside us so we can trust Him to help us face our unwanted emotions and process them. And the same power that raised Lazarus from the dead, is the same power available to each of us to help us serve and honor only Jesus with thanksgiving.

Prayer: Lord Jesus, please forgive me for the many times I have turned to ministry to avoid unwanted feelings in my heart instead of turning to You to help me process them. I have often lost sight of You by becoming preoccupied with what I do. If I am totally honest, I must confess that I have sought to elevate my value through my performance instead of resting in Your performance on the cross which provides the basis for my infinite value. Today, I give You my heart and all of its uncomfortable emotions. Please hold me in Your arms of everlasting love and mercy. Just knowing that You loved me enough to die in my place for all my sins causes me to pause and say, “Thank You, my Lord and my God. Here I am to honor only You. I am trusting Your resurrection power to enable me to serve You by serving others.” In Your precious name I pray. Amen.

1. Adapted from https://www.encyclopedia-titanica.org/the-champagne-king-the-playwright-and-the-savoy-hotel.html on May 29, 2017.