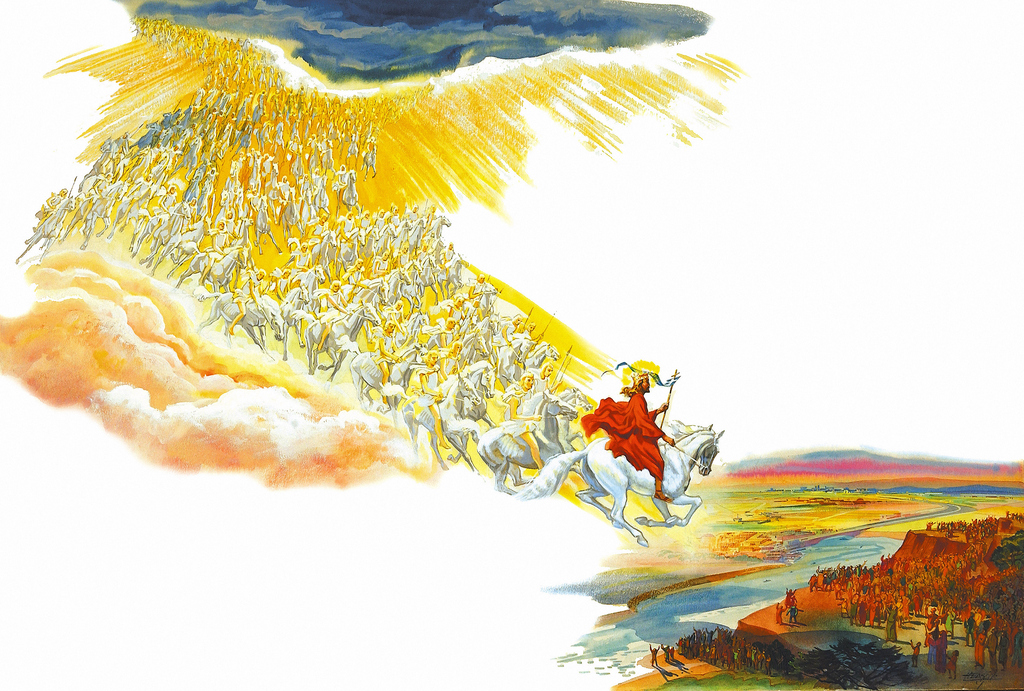 “And I saw the beast, the kings of the earth, and their armies, gathered together to make war against Him who sat on the horse and against His army.” Revelation 19:19

The angel invites these scavenger birds to “the great supper of God” in anticipation of the vast slaughter of Jesus’ enemies at the battle of Armageddon (19:19-21; 14:18-20; 16:13-16). Jesus predicted this when He said, “27 For as the lightning comes from the east and flashes to the west, so also will the coming of the Son of Man be. 28 For wherever the carcass is, there the eagles will be gathered together.” (Matthew 24:27-28). The Greek word translated “eagles” (aetoi) means “vultures” in this context. 2

“The great supper of God,” however, will be a time of great sorrow and judgment. At this supper, instead of eating the food, people will be the food. Five times John uses the word “flesh” (sarkas) when describing this supper (19:18) to emphasize the immense slaughter of humanity when Jesus Christ defeats His enemies at the Battle of Armageddon. Those of “all” classes and statuses – “kings… captains… free and slave… small and great” – will die instantly along with their “horses” from the sharp sword proceeding from King Jesus’ mouth (19:18; cf. 19:15).

Swindoll writes that “one commentator notes that the angel’s pronouncement ‘is gruesome and powerful, guaranteeing before the battle has been joined that the end result is certain. The angel commands all the birds… [using] ironically the same verb in 16:15, 16 for the false trinity “gathering together” the nations for the final battle. At the same time as the evil forces gather for Armageddon, the carrion birds are called to gather for the aftermath of the inevitable slaughter.’” 4

Most interpreters take the term “horses” figuratively instead of literally. But I prefer to take these “horses” literally. It is quite possible that modern modes of transportation and modern weapons technology had been destroyed by the many divine judgments and/or nuclear wars throughout the Tribulation so that at the end of the Tribulation the primary mode of transportation was on horseback and weapons included chariots, swords, spears, bows and arrows. This preserves a literal understanding of Bible prophecies which predicted such things for end time battles (Revelation 19:18; cf. 9:7-19; 18:13; Ezekiel 38:1-39:29; Zechariah 12:1-14; et al.).

Faithful believers in Jesus who have not died or been martyred during the Tribulation (cf. 12:13-17; Matthew 24:13) will enter the Millennial Kingdom with mortal bodies and repopulate the earth (cf. Genesis 9:1; Isaiah 65:17-23). 5

Some Bible interpreters believe all nonbelievers will die when King Jesus returns to earth. But Vancendak disagrees: “But in light of the information given by the Lord regarding the Judgment of the Sheep and the Goats in Matthew 25:31-46, it is obvious that there are some unbelievers (who have apparently survived by hiding in elaborate and costly underground bunkers or even caves) that will be brought before Christ for judgment (cf. Matthew 25:32) after He takes His throne. They will be sent, not to Hades, but to the lake of fire: ‘Depart from Me… into the everlasting fire” (Matthew 25:41). Of course, they will appear at the Great White Throne. The text simply means that they will have the same fate for the next one thousand years as the Beast and the False Prophet (cf. 19:20). The ‘holding tank’ of this corrupt bunch will be the lake of fire. Though one cannot be dogmatic on this, it seems likely that infants and children still alive after Armageddon who have not reached the age of accountability will enter Christ’s kingdom and eventually repopulate the earth. Some will grow up and believe in Christ and others will not. This accounts for the huge army Satan gathers at the end of the thousand years to war against Christ (see 20:7-9).” 6

As the birds of prey gathered, John “saw the beast, the kings of the earth, and their armies, gathered together to make war against Him who sat on the horse and against His army.” (Revelation 19:19). King Jesus will not return to earth to bring unpredictable judgment against unsuspecting innocent parties. The “beast” or Man of Sin and his allies have deliberately waged “war against” King Jesus “and against His army” (cf. Psalm 2:1-3), and Christ will strike down these wicked foes. 7

Next John records the results of this final battle: “Then the beast was captured, and with him the false prophet who worked signs in his presence, by which he deceived those who received the mark of the beast and those who worshiped his image. These two were cast alive into the lake of fire burning with brimstone.” (Revelation 19:20). We are not told how or by whom “the beast” and “the false prophet” were “captured.” John simply focuses on the accomplishment of this feat. Their time in power is over because Jesus Christ is God (John 1:1; I John 5:20), not the beast who claimed to be God (cf. 2 Thessalonians 2:4). 8

The false prophet had “deceived” people on earth to receive “the mark of the beast” and worship “his image” during the last half of the Tribulation period (19:20; cf. 13:11-18).No doubt he appeared to the world to be a very spiritual spokesman with amazing supernatural powers (“worked signs by which he deceived”). Those who were deceived by him will not only face God’s temporal judgment when King Jesus kills them in battle, but they will also face God’s eternal judgment in the lake of fire (cf. 14:9-11). 9

So heinous and wicked was their blasphemy against God that the “beast” and “false prophet” will be the first human beings to be “cast alive into the lake of fire burning with brimstone.” This verse is clear that there is no annihilation in store for those who reject Jesus Christ. Some have wrongly taught that because God is love, nonbelievers are punished in hell for a time before simply ceasing to exist. It is clear from 19:20 and other verses 10 (cf. Matthew 25:41, 46; Mark 9:43-48; Jude 1:7; Revelation 14:10-11; 20:10, 15; 21:7-8) however, that their punishment is without end.

Those who have rejected Christ and died throughout history up to this point are in torments in hades (Luke 16:23). The lake of fire is a different place prepared for the devil and his fallen angels (Matthew 25:41). 11 After the thousand-year reign of King Jesus, the beast and false prophet will be permanently joined by the devil and all nonbelievers in the lake of fire (Revelation 20:10-15).

“Then suddenly it will be all over. In fact, there will be no war at all, in the sense that we think of war. There will be just a word spoken from Him who sits astride the great white horse. Once He spoke a word to a fig tree, and it withered away. Once He spoke a word to howling winds and heaving waves, and the storm clouds vanished, and the waves fell still. Once He spoke to a legion of demons bursting at the seams of a poor man’s soul, and instantly they fled. Now He speaks a word, and the war is over. The blasphemous, loud-mouthed Beast is stricken where he stands. The false prophet, the miracle-working windbag from the pit is punctured and still… Another word, and the panic-stricken armies reel and stagger and fall down dead. Field marshals and generals, admirals and air commanders, soldiers and sailors, rank and file, one and all – they fall. And the vultures descend and cover the scene.” 12

So many people will be killed “that all the birds” will have plenty to eat. Imagine how foolish the beast and his global armies will look as they point their weapons at the all-powerful Creator God, Jesus Christ, Who spoke the entire universe into existence (Genesis 1; John 1:1-3; Colossians 1:16-17; Hebrews 1:1-2)!!! Although foolish, it is like humanity to overestimate “their abilities, forever proud of their technology, yet never coming to terms with their own weakness before the all-powerful, all-knowing Lord of the universe.“ 13

1: You must have childlike faith in Christ alone to enter His coming kingdom. Why? Because all of us need a Savior because all of us have sinned against God (Romans 3:9-23) and deserve to be separated from Him forever in a terrible place of suffering and torment called the lake of fire or hell (Romans 6:23; Mark 9:43-48; Revelation 20:15). But God loves us so much He gave His only perfect Son, Jesus Christ, to die in our place for all our sins and rise from the dead (I Corinthians 15:3-6; John 19:30). Jesus Christ is alive today and He invites us to have childlike faith in Him alone to enter His coming Kingdom. Jesus said, “Assuredly, I say to you, whoever does not receive the kingdom of God as a little child will by no means enter it.” (Mark 10:15).

If you are ready to trust Jesus alone for entrance into His future kingdom on earth, you can tell Him through prayer. But remember, praying a prayer does not get you into Jesus’ kingdom. Only believing or trusting in Jesus alone for everlasting life will gain you entrance into His kingdom on earth (John 3:5-6, 14-16). This prayer is a way of telling Jesus you are now trusting in Him alone.

Prayer: Dear Jesus, I know I am a sinner, and I cannot save myself from my sins. I believe You died in my place for all my sins on the cross and rose from the dead at Your first coming. And I believe You are coming back to earth to reign as King of kings and Lord of lords in the future. I am now trusting You, Jesus, alone (not my good life, my religion, or my prayers) to give me everlasting life now and a future home in Your coming kingdom. Thank You Jesus for the everlasting life I now have and the home I will have in Your future kingdom on earth. In Your mighty name I pray, Lord Jesus. Amen.

When you believed in Jesus, He gave you everlasting life which can never be lost or taken away from you (John 10:28-29). Jesus guarantees you will enter His kingdom on earth when He returns with His church (Mark 1:15; 10:15; John 3:5-6, 16). He wants to use you now to tell others this good news of His coming kingdom so they also may trust in Him alone to be saved and enter His future kingdom on earth.

The second condition for participating in the marriage supper of the Lamb is 2. we must live faithfully for Jesus after believing in Him for eternal life.While all believers are called or invited to prepare for the wedding supper with Jesus to share in rewards and the glory of Christ’s kingdom, only those believers who prepared by being obedient to Jesus until the end of life on earth will be able to participate (Revelation 2:25-27; 3:5; 19:7-9; cf. Matthew 8:11-12; 22:1-14). All believers will enter and live with Christ in His eternal kingdom through faith in Him alone (Matthew 18:3; John 3:5; 16), but only faithful believers will be able to enjoy ruling with Him there (Luke 19:11-27; Romans 8:17; 2 Timothy 2:12; Revelation 2:25-27; 3:21).

If you found this to be helpful, please share this with those you want to see attend the marriage supper of the Lamb in Jesus’ future kingdom on earth. Thank you and may the Lord Jesus Christ richly bless you!