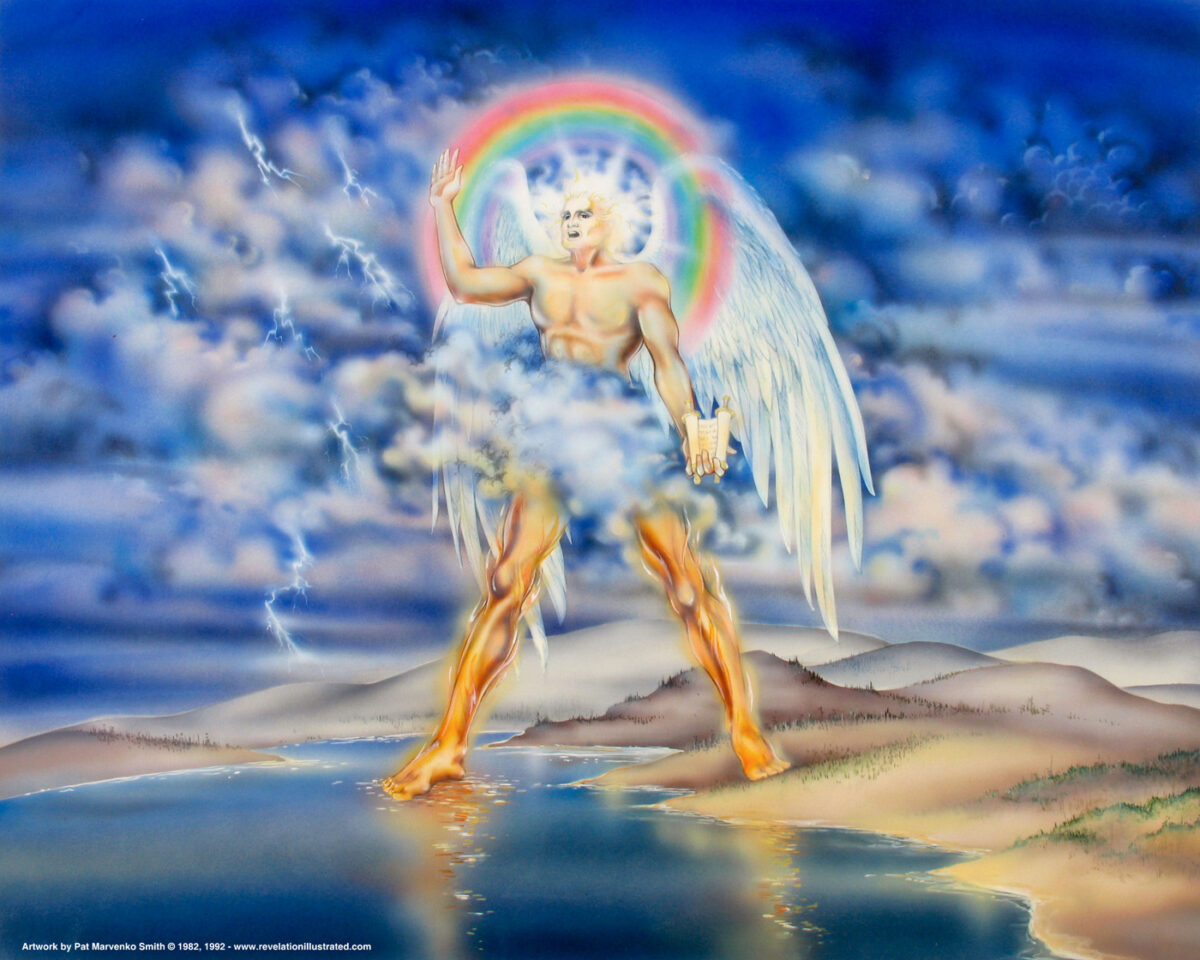 “I saw still another mighty angel coming down from heaven, clothed with a cloud. And a rainbow was on his head, his face was like the sun, and his feet like pillars of fire.” Revelation 10:1

﻿“Christian author John Eldredge notes three truths that surface in every good story, including God’s true story of creation and redemption: Things are not what they seem. This is a world at war. We have a crucial role to play.” 1

﻿The book of Revelation depicts a captivating drama in which we can recognize each of the three parts of a great story. First, things are not what they seem. Although we live in the physical realm, an invisible world also exists, which influences our everyday lives. This spiritual world will become increasingly more “visible” in the future. Second, this is a world at war. Since Satan’s successful temptation of Adam and Eve in the Garden of Eden (Genesis 3), the conflict has continued. Not only has it infected human history; it also will one day immerse the whole world in deception and destruction. This all leads us to the third element in the book of Revelation: We have a crucial role to play. This battlefield is no place for distant spectators. Our participation as members of God’s redeemed people is essential. 2

Like an intense thriller movie on TV, the book of Revelation has many intense scenes involving God’s defeat of evil leading to the ultimate victory of Christ and His people. Even as victors in Christ, we can be overwhelmed with the severity of God’s judgments in this book. And just as we look forward to commercial breaks amidst the intense scenes in a thriller movie to process what we have seen and prepare for what is next, so God provides interludes in the book of Revelation that give us an opportunity to pause and process what we have just seen and prepare for what is coming.

The first interlude between the sixth and seventh seals ﻿revealed God will save two groups of people during the first half of the Tribulation: The 144,000 Israelites alive on the earth (7:1-8), and a great multitude of people from all nations who will die during that time and be taken to heaven (7:9-17). In Revelation 10, a second interlude interrupts the sequence between the sixth and seventh trumpets. 3 The focus shifts, temporarily, from the outpouring of God’s wrath on unbelieving earth dwellers, to the consolation and encouragement of believers. 4

John records, “I saw still another mighty angel coming down from heaven, clothed with a cloud. And a rainbow was on his head, his face was like the sun, and his feet like pillars of fire.” (Revelation 10:1). In contrast to the demonic assault of the fifth and sixth trumpet judgments (9:1-21), John sees a powerful angel of God appear. Some suggest that this “mighty angel” is Jesus Christ. 5 But the evidence for his being simply “another” (Greek: allon = another of the same kind) “mighty angel” is more persuasive(cf. 10:5-6). 6

“2 He had a little book open in his hand. And he set his right foot on the sea and his left foot on the land, 3 and cried with a loud voice, as when a lion roars. When he cried out, seven thunders uttered their voices.” (Revelation 10:2-3). This mighty angel “had a little book” or scroll “open in his hand.” The “little book” in the angel’s hand may be different from the scroll that Jesus Christ unrolled (cf. 5:1; 6:1). In contrast with the seven-sealed scroll (biblion) in the hand of the Lamb (5:1), John used a different, and rare, Greek word to describe this “little book” (biblaridion). The tense of the Greek verb translated “open” (ēneōgmenon) is perfect passive, and indicates that someone had already opened it, and it was already unrolled in his hand. It probably represents a new revelation from God (10:2a; cf. Ezekiel 2:9—3:3; Jeremiah 15:15-17). 9 The fact that this angel stood with one foot “on the sea” and one foot “on the land,” suggests that his authority and message apply to the whole world (10:2b).

Next the mighty angel “cried with a loud voice, as when a lion roars” to overpower his prey (10:3a). The angel’s “loud voice” indicates that God is about to overpower His enemies. Following the loud voice, John hears the “seven thunders” utter their voices, which symbolize God’s voice (10:3b; cf. Job 37:2-5; 40:9; Psalm 29:1-9; John 12:28-29). Psalm 29 makes this very evident as it contains a seven-fold manifestation of God’s voice in relation to thunder (“The God of glory thunders… The voice of the Lord is powerful… full of majesty… shakes the wilderness…”, etc. – Psalm 29:1-9). What John seems to be saying in Revelation 10 is that God’s promise to bring judgment on sinful humankind will be brought to pass by His unlimited power. Thunder warns people that a violent storm is coming soon. 10

Appealing to God as the eternal Creator (“by Him who lives forever ever and ever, who created heaven…the earth…the sea”) ﻿answers evolutionary speculation as to the origin of the earth. 12 As Creator God He has the power to bring to pass whatever He wants when He wants to emphasize the certainty “that there should be” no more delay in carrying out God’s plans (“the mystery of God”) which “He declared to His servants the prophets” (10:5b-7) concerning “the kingdoms of this world” becoming “the kingdoms of our Lord” Jesus Christ (11:15).  ﻿ ﻿

Tony Evans writes, “With the rapid pace at which descriptions of judgment have proceeded thus far, it may seem surprising that God’s messenger would say there has been a delay! Yet what has been delayed to this point is the full and final outpouring of God’s ﻿wrath. Through the judgment of the seven seals (6:1-17; 8:1-5) and the first six trumpets (8:6–9:21), God has been restraining his final judgment to allow continued opportunity for repentance. As Peter put it, the delay is not slowness but patience: ‘The Lord does not delay His promise, as some understand delay, but is patient with you, not wanting any to perish but all to come to repentance’ (2 Pet 3:9).” 13

“When the seventh angel will blow his trumpet in 11:15, it will mark a shift to the end of the tribulation, when the seven bowls of God’s wrath will be poured out on the earth (16:1-21). At that point, the narrative truly will ﻿begin rushing toward the return of Jesus to set up His throne on earth. It might seem puzzling that John would announce a rush to the second coming when there are still twelve chapters remaining in Revelation. However, some of those chapters will rehash from a different perspective events already described. Thus far, God has revealed events to come. Beginning in chapter 11, He will focus on personalities involved in those events. These include the two witnesses, the Antichrist, and the false prophet.” 14

Walvoord explains that “the mystery of God” declared to the prophets is not a “reference…  to hidden truth but to the fulfillment of many Old Testament passages which refer to the glorious return of the Son of God and the establishment of His kingdom of righteousness and peace on the earth. While God’s purposes are not necessarily revealed in current events where Satan is allowed power and manifestation, the time will come when Satan no longer will be in power and the predictions of the Old Testament prophets will be fulfilled. Then all will know the Lord and the truth about Him (Jeremiah 31:34). Here again is evidence that the seventh trumpet introduces the seven bowl judgments of God’s wrath described in Revelation 16.” 15

Remember when the martyred Tribulation believers cried out, “How long, O Lord, holy and true, until You judge and avenge our blood on those who dwell on the earth?” (Revelation 6:10)? The mighty angel of Revelation 10 loudly announces that God’s response to their prayers will soon come to an end without delay. 16

It is easy for us to avenge the wrongs that have been done to us and to those close to us. Throughout history Christians have endured intense persecution and suffering. The mighty angel reminds us that God will not delay His full and final judgment of rebellious humanity to avenge the wrongs done to His people. Instead of taking vengeance into our own hands, we are to release it to God so He can make things right in His time and way.

Prayer: Heavenly Father, thank You for giving us understanding of Your prophetic Word. Thank You for this interlude between the sixth and seventh trumpet judgments expressing Your grace and mercy to those who have yet to believe in Christ for His gift of salvation. The fact that You have delayed the full and final outpouring of Your wrath upon rebellious earth-dwellers shows that You are not willing that any should perish but that all should come to repentance, that is, change their minds about whatever is keeping them from believing in Jesus, and then believe in Him so they can enter His future kingdom on earth. Every day that passes by is another expression of Your grace which gives underserving sinners on earth another opportunity to get right with You through faith in Jesus Christ. Father, thank You for Your patience toward us, Your sinful children. Please grant us abundant grace to proclaim Your gospel message to a lost world that is perishing without Jesus Christ. Please rescue the unsaved from the horrific judgments that will come upon the earth in the future and from their ultimate judgment in the lake of fire. Forgive us our sins and help us to forgive others, knowing that vengeance belongs to You. In Jesus’ mighty name, we pray. Amen.

3. The last two paragraphs are adapted from Ibid.