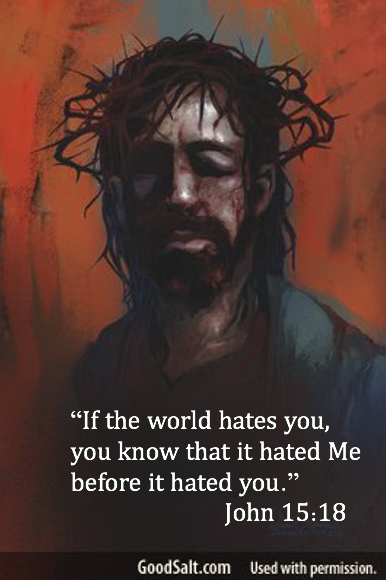 Today, just like in the book of Acts, believers are persecuted all over the world for following Jesus. According to Open Doors USA, “A woman in India watches as her sister is dragged off by Hindu nationalists. She doesn’t know if her sister is alive or dead.

“A man in a North Korean prison camp is shaken awake after being beaten unconscious; the beatings begin again.

“A woman in Nigeria runs for her life. She has escaped from Boko Haram, who kidnapped her. She is pregnant, and when she returns home, her community will reject her and her baby.

“A group of children are laughing and talking as they come down to their church’s sanctuary after eating together. Instantly, many of them are killed by a bomb blast. It’s Easter Sunday in Sri Lanka.

“These people don’t live in the same region, or even on the same continent. But they share an important characteristic: They are all Christians, and they suffer because of their faith. While Christian persecution takes many forms, it is defined as any hostility experienced as a result of identification with Jesus Christ. From Sudan to Russia, from Nigeria to North Korea, from Colombia to India, followers of Christianity are targeted for their faith. They are attacked; they are discriminated against at work and at school; they risk sexual violence, torture, arrest and much more.” 1

Do you realize that in just the last year (2020 World Watch List reporting period), there have been:

– 2,983 Christians killed for their faith

– 9,488 churches and other Christian buildings attacked

While Christians are not suffering extreme persecution in the USA, there is an increasing lack of tolerance for Christian beliefs and practices in our country. During COVID-19, certain government leaders in America are trying to use this pandemic to try to shut down churches. For example, on July 1, 2020, the governor of California banned singing and chanting in places of worship in the name of a pandemic. Jordan Sekulow, Executive Director of the American Center for Law & Justice (ACLJ) states, “Banning singing in California churches is an unconstitutional abuse of power. And to do it in the name of a pandemic is despicable. This ban is clearly targeted at religion. It is clearly a violation of the First Amendment and a direct violation of religious liberty.” 3

Have you ever been falsely accused or betrayed by a friend? Have you had people plotting against you? Or have you ever experienced some other form of personal hostility? Jesus experienced all these things and so will we as we follow Him.

For the next few days, we are going to receive instruction from Jesus Christ about how to be effective witnesses for Him in a hostile world. Earlier in John 15, the Lord Jesus spoke to His eleven believing disciples about their relationship to one another – they are to love each other as He loved them (John 15:12-17). Now He speaks to them about their relationship to the world (15:18-16:4). Jesus wanted to prepare His disciples (and us) for the opposition they would face after He ascends to the Father in heaven. How can we be effective witnesses to a hostile world?

The first way is to REALIZE THAT YOU WILL FACE THE SAME CONFLICT WITH THE WORLD THAT JESUS DID (John 15:18-19). Christ never said that following Him as a disciple would be easy. Earlier, when Jesus had sent the Twelve disciples on a special mission, He warned them that they would be as sheep among wolves (Matthew 10:16).

Now He was sending them into the world on a mission, and again Christ warned these men of conflict with the world. “If the world hates you, you know that it hated Me before it hated you.” (John 15:18). ﻿“The world” in John’s gospel is “the system of organized society hostile to God, which is under Satan’s power (John 14:30).” 4

In anticipation of the world’s hatred, Jesus warned His disciples that they would experience the same hostility from the world that He had experienced. He did not promise a painless, effortless experience as a disciple. He says, “If the world hates you [and it does], 5  then it should come as no surprise to you because it hated Me first.” From His birth when king Herod sought to kill Him, to His death on the cross, Jesus experienced opposition from the world. Therefore, a person cannot be intimately related to Christ without being hated by His enemies. The main issue here is not whether we will experience rejection and persecution as Christ followers, but how we will respond to it.

Perhaps some of you were rejected or even persecuted for beginning to follow Christ as a new believer. When I first got saved, I stopped drinking alcohol with my non-Christian friends and they got mad at me. They no longer called me their friend. They made fun of me and avoided me. This should not surprise us in light of what Jesus is saying here.

Some churches teach that when you become a Christian, you will have no more problems or difficulties. Is that true? Of course not. If Jesus Christ, the perfect Son of God, experienced rejection and persecution for perfectly following God’s will, why would we think we are exempt from such treatment as we imperfectly follow the Lord?!

Christ wants us to adjust our expectations about following Him as His disciples. Discipleship is costly, but eternal life is absolutely free. Discipleship involves rejection and persecution from Satan’s world system which is hostile toward God. After all, the Bible says, “For to you it has been granted on behalf of Christ, not only to believe in Him, but also to suffer for His sake.” (Philippians 1:29). This is not a popular message today. But it is a needed message, isn’t it?! If we don’t adjust our expectations so that they line up with what Jesus taught, we are going to become very discouraged when we experience opposition for following Christ.

Christ said to His half-brothers, “The world cannot hate you, but it hates Me because I testify of it that its works are evil.” (John 7:7). Jesus called sin, sin. He came to tell the truth and that is why the world hated Him. And if we are going to be like Him, we must do the same. If we find ourselves fully accepted by the world it is cause for concern. We are to be loving, kind, sensitive, and understanding. But if our lives do not challenge the wickedness of the world around us, if our lives do not provoke some persecution, criticism, and opposition – something is probably wrong. We have probably become too friendly with the world around us.

Perhaps we need to ask ourselves, “Does the world hate me? If it does not, why not? Is it because the world has become more Christian or because Christians have become more worldly?” If we are not experiencing opposition from the world, it may be because our lifestyle is no different than the world’s lifestyle. James 4:4 says, “Adulterers and adulteresses! Do you not know that friendship with the world is enmity with God? Whoever therefore wants to be a friend of the world makes himself an enemy of God.” (James 4:4). If the world is our friend, then God is our enemy.

James likens friendship with the world to spiritual adultery with God. It is like a married man who decides to engage in immorality with a woman to whom he is not married. In that very decision he chooses to reject faithfulness to his wife. When Christians crave for worldly acceptance and living, they have committed spiritual adultery and have rejected friendship with God. On the other hand, if God is our friend, the world will be our enemy. We cannot be a friend of God and the world at the same time.

Younger Christians may mistaken the world’s hatred toward them as a reproach for not being more Christ-like. So they conclude that if they were more gentle, generous, loving, or compassionate, then they would receive more favor from unbelievers. But the truth is, the more we become like Jesus, the more the world will hate us. Christians are not mistreated or shunned by the world because they are superior, but because they are servants of their Master, the Lord Jesus Christ, Whom the world has rejected. 7

Prayer: Father God, as I look at the hostility in the world toward those who follow Jesus, I am reminded of these important words Christ gave to His disciples. Knowing the world’s hatred for Jesus empowers me to endure its hatred toward Christ living in me. Please help me to adjust my expectations so they align with Jesus’ teaching. Opposition from the world will happen when we follow Christ because the world hates Jesus Who lives inside us. By Your grace and love, Lord God, I choose to follow my Lord Jesus no matter what the cost. Use me to be Your voice of grace and truth to a hostile world so millions may come to know Jesus as the Giver of life everlasting. Please be with my brothers and sisters in Christ all around the world who are suffering for Jesus’ sake. I ask that You give them abundant grace to love their enemies and to boldly make Christ known to them. In the mighty name of Jesus Christ I pray. Amen.

1. Taken from  https://www.opendoorsusa.org/christian-persecution/ on December 13, 2020.

3. Taken from https://www.prnewswire.com/news-releases/aclj-files-lawsuit-challenging-california-ban-on-singing-in-church-301094471.html on December 13, 2020.