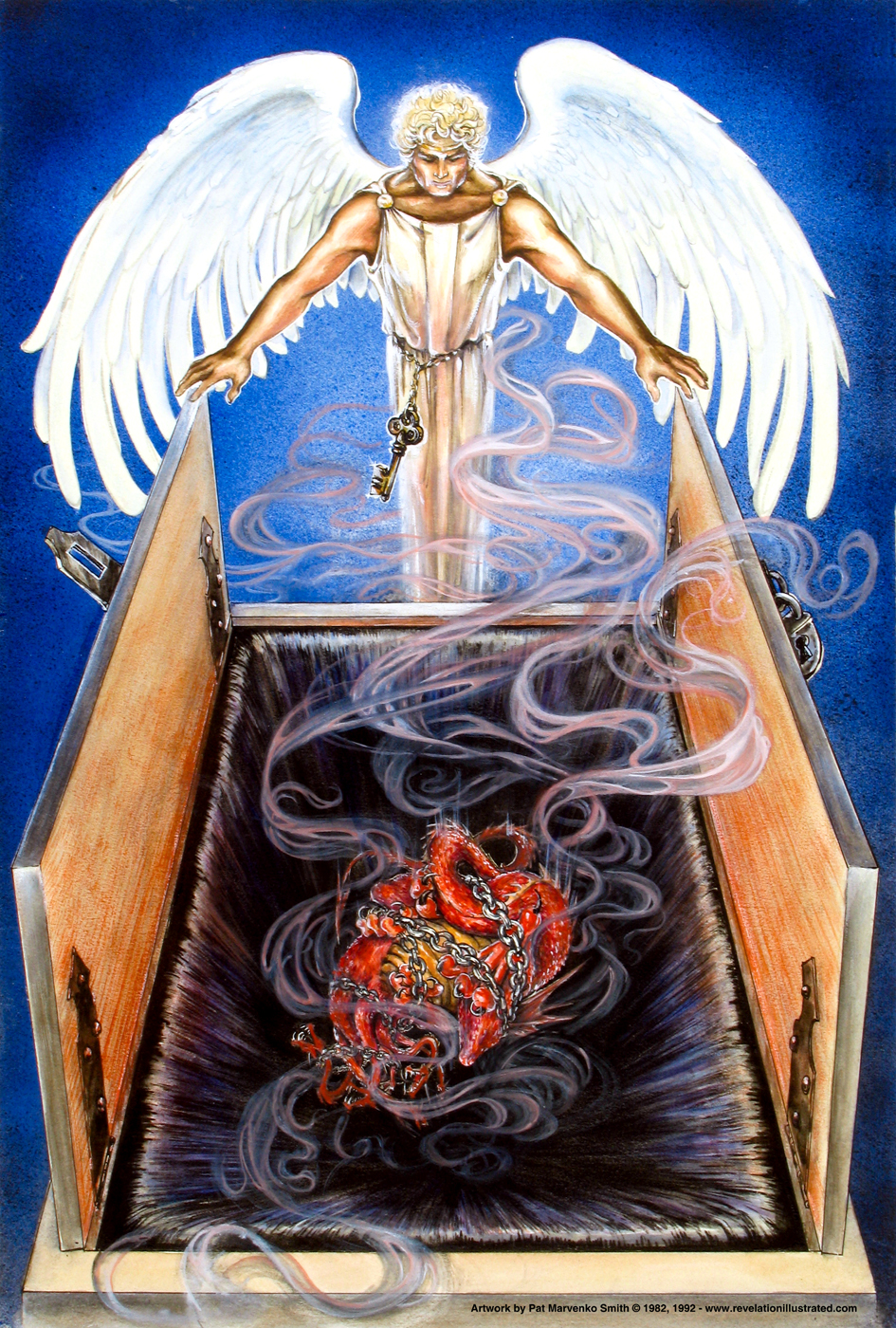 “He laid hold of the dragon, that serpent of old, who is the Devil and Satan, and bound him for a thousand years.” Revelation 20:2

When Adam and Eve sinned in the Garden of Eden (Genesis 3:1-19), sin and death entered the world (Romans 5:12). Since that time, we have experienced the devastating consequences of sin. Sin leads to shame, physical and emotional illness, provokes addictions, and destroys marriages and families. Every area of society or culture has been plagued by its sinister influence. Sin corrupts the legal system, destroys governments, encourages corporate greed, erodes economics, encourages wars, and fosters false religion. Sin not only ruins an individual’s life, but it also demolishes communities, countries, and eventually the entire planet. 1

No matter where you look in the world, something is terribly wrong. People of honesty and integrity are taunted as “Boy Scouts.” The economy seems to move along well until we realize it is driven by greed and corruption. The quiet voices of harmonious churches are drowned out by the eruptions of church divisions. The thought of a happy marriage sounds like a myth. The legal system oppresses victims while protecting the rights of perpetrators. 2

Why is the world plagued by sin and its consequences right now? One primary reason is because Satan is currently permitted to rule the earth (cf. John 12:31; 14:30; 16:11; Ephesians 2:2). Originally, God gave His dominion covenant to humankind to rule on His behalf on earth as a reflection of His dominion over all (Genesis 1:26-28). But when Adam and Eve sinned against God (Genesis 3:1-6), the earth was temporarily placed under the dominion of Satan. Only Jesus Christ will be able to defeat the Devil and restore God’s kingdom rule over all 3 (Genesis 3:15; cf. Psalm 2:6-9; Colossians 2:15; Hebrews 2:15-16; Revelation 19:11-20:6).

We must understand that Satan is not some mythical creature created by human imagination. He is a very real and powerful spirit being who holds sway over many aspects of the world. “We know that we are of God, and the whole world lies under the sway of the wicked one.” (I John 5:19). Satan uses the world system’s cultures, societies, economics, educational institutions, politics, and false religions to desensitize people to God and His Word (I John 2:15-17; 5:19; Ephesians 2:2). For the reign of God to be reestablished on the earth, Satan must be removed from his throne. 4

It is true that sin ruins everything – but the day is coming when Jesus Christ will redeem everything. When Christ returns to earth to reign at the end of the Tribulation period, there will be peace on earth, justice for all, strong marriages and families, peaceful relationships, safe communities, moral purity, equal opportunities, and ethical integrity for everyone (cf. Psalm 2:6-9; 72:10-11; Isaiah 2:3-4; 65:20-23; et al.). This will not be the result of educational funding, political campaigning, social programming, cultural awakening, or even religious revivals. True and lasting transformation of the world will only take place when Satan and his followers are dethroned and Jesus Christ and His glorified followers reign over all the earth. 5

“He laid hold of the dragon, that serpent of old, who is the Devil and Satan, and bound him for a thousand years.” (Revelation 20:2). Four titles are given for the one to be bound. “The dragon” occurs most often in Revelation (12:3-4, 7, 13, 16-17; 13:2, 4, 11; 16:13) because Satan is violent, cruel, and monstrous in nature. 10 As “that serpent of old” he is crafty and subtle in character (cf. Genesis 3:1-5; 2 Corinthians 11:3). The name “Devil” (diabolos) refers to him as a “slanderer” 11 or “accuser.” 12 This title for “the evil one would have made a specially strong impact in the first century, for there was a well-known and well-hated figure called the delator, the paid informer. He makes his living by accusing people before the authorities.” 13 The title “Satan” (Satanas) depicts him as an “adversary” 14 who is opposed to God and His people.

The word “bound” (edēsen) means “to confine with various kinds of restraints,” 15 in this context the lock (“key”) to the bottomless pit and “chain” (20:1). Satan will be completely incapacitated for “a thousand years” (20:2). Six times the phrase “a thousand years” occurs in this section (20:2-7) which underscores a key biblical truth in this part of the book of Revelation. The word “millennium” is derived from the Latin words for “a thousand years” (mille = thousand, annus = year). Theologians use this term to reference various interpretations of the “thousand years” in Revelation 20. 16

Believers who survived the Tribulation will enter the Millennial Kingdom of Christ without glorified bodies (Matthew 25:31-46) and they will have offspring in mortal bodies during the Millennium who have the conscious choice to sin just like Adam and Eve did before they sinned (Isaiah 65:20; Zechariah 14:16-21; Matthew 5:22). Their sinning will be because of their sinful nature (James 1:13-14), not Satan’s influence. 19

“After” Satan’s thousand-year imprisonment he “must be released for a little while” 20:3b) to lead one final worldwide rebellion against King Jesus (20:7-9) before the Devil (20:10) and all nonbelievers will be cast into the lake of fire forever (20:11-15).

Can you imagine a world in which Satan can no longer deceive leaders, tempt sinners, take advantage of the helpless or weak, including the unborn and elderly, nor corrupt the strong 20 or accuse God’s people of wrongdoing!?! Without Satan exerting his strategies of deception, there will be millions of people coming to faith in King Jesus during His thousand-year reign on the earth! There will be an incredible harvest of souls unlike any other period in history!

May each of us prepare for this unprecedented time of blessing and joy by believing in Jesus Christ for His gift of salvation (Acts 16:31; John 3:5-6, 15-16) followed by praying and living for His coming Kingdom as we put Him first in our lives (Matthew 6:9-10, 33). To Jesus be all the glory!

Prayer: Heavenly Father, we thank You for this glimpse into the future when the dragon, that serpent of old, who is the Devil and Satan, will be completely incapacitated for a thousand years while King Jesus and His faithful followers rule over the earth. What a glorious time of blessing and joy this will be when Satan can no longer deceive the nations. Please use us now, we pray, to share the good news of Jesus’ grace so many people can believe in Him for His gift of everlasting life and enjoy the incredible blessings of the Millennial Kingdom of Christ on earth. In the matchless name of Jesus Christ, we pray. Amen.