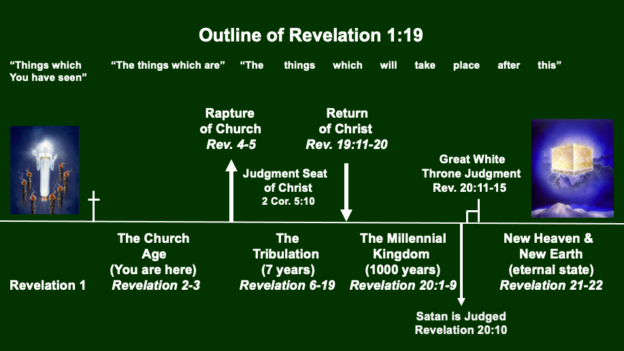 Yet at a time when attention to this prophetic book is most needed, its importance has lessened in churches and in the lives of Christians. During my forty-two years as a believer in Jesus Christ, I can count on one hand how many messages I have heard about this book. Why?

One major reason for this is because ﻿“the subject matter and widespread symbolism can make it hard to determine what to take literally and what to take figuratively.” 2  This has led to many different interpretations and even division among Christians. Some fanatical teachers have misused this symbolism to set dates about future events. 3 Christians have quit their jobs or sold their homes because a well-known preacher told them Jesus was coming on a specific date. This has left many Christians reluctant to turn to the book of Revelation.

This difficulty in determining what is symbolic and what is literal in Revelation has led to four major approaches to understanding the message and meaning of this book: 4

1. ﻿﻿THE ALLEGORICAL APPROACH. With this approach Revelation is viewed as a collection of stories about the battle between good and evil and has no reference to actual past or future events. For example, the “Beast” or “Antichrist” of Revelation, is not a real person, but the personification of evil. 5 This view interprets Revelation in a nonliteral sense.

2. THE PRETERIST APPROACH. According to this view, Revelation is perceived as a symbolic portrayal of events that took place during the first century in the Roman Empire, specifically the church’s conflicts with Judaism and paganism in John’s day. Proponents of this view would identify the “Antichrist” as a past Roman Emperor. 6 Hence, advocates of this approach believe Revelation does not pertain to actual future events. The weakness of this approach is that it contradicts the book’s claim to be mostly about future events which have not yet taken place on earth (cf. Revelation 1:3, 19; 22:7, 10, 18-19).

3. THE HISTORICAL APPROACH. According to this approach,Revelation is seen as a symbolic portrayal of church history from the Day of Pentecost until the Second Coming of Christ to earth. Many proponents identify the “Antichrist” with one of the medieval popes, but they do not agree on which one. 7 The weakness of this view is that interpreters find it difficult to agree on what part of history a given passage refers to.

4. THE FUTURIST APPROACH. Those who hold to this view of Revelation see the major portion of the book (Revelation 4–22) as prophetic events yet to happen (e.g., the Rapture, the Tribulation, the Second Coming of Christ, the Millennial kingdom, the Great White Throne judgment, and the Eternal State). This is the only approach that takes seriously Revelation’s claim to be a prophetic book. The futurist approach requires a more literal interpretation and belief in the supernatural, 8 which its critics are uncomfortable with. These approaches are listed from the least literal interpretive approach to the most literal. 9 I will be using this approach as we study the book of Revelation.

A good place to start when interpreting the book of Revelation is with Jesus’ prophetic teaching in Matthew 24-25. When talking about the seven-year Tribulation period, many Bible teachers say that the first half of the Tribulation will be a time of peace followed by judgments during the last half of the Tribulation. But Jesus said of the first three-and-a-half years that “nation will rise against nation, and kingdom against kingdom. And there will be famines, pestilences, and earthquakes in various places. All these are the beginning of sorrows.” (Matthew 24:7-8). This is hardly a period of peace. 10

“Revelation bears this out as well. In fact, as shall be seen in the comments on Revelation 6-11, because of the seal and trumpet judgments that will fall on the earth during the first three-and-a-half years, half of the earth’s inhabitants will have lost their lives! This can hardly be thought of as a time of peace on earth. It is important to note that the purpose of the second seal judgment is “to take peace from the earth” (6:4; emphasis added).

“﻿The truth is that all these troubles will signal that God’s judgments have begun. Then during the last three-and-a-half years—once the Man of Sin has defiled the temple in Jerusalem (cf. Matt 24:15)—the earth will endure even greater troubles. ‘For then there will be great tribulation (thlipsis megalē, ‘great travail’, or ‘intense birth pains’; cf. anguish in John 16:21), such as has not been since the beginning of the world until this time, no, nor ever shall be’ (Matt 24:21; emphasis added). It is clear that as the last three-and-a-half years transpire, the world will reach a point of chaos and trouble that is without parallel in human history. Again, ﻿this is borne out in Revelation 12-19, and especially seen in the bowl judgments and the Battle of Armageddon.

﻿“In Matthew 24, immediately after Jesus’ words about the Great Tribulation, He said that unless God limits that era to three-and-a-half years, life on earth would cease to exist (v 22). Far from being a time of peace followed by disaster, the seven-year Tribulation Period will begin with troubles and will conclude with even greater troubles. This is clearly seen in both the Olivet Discourse as well as the Book of Revelation.” 11

Before we begin our verse-by-verse study, let’s look at some foundational information to help us understand Revelation.

AUTHOR: The writer of Revelation identifies himself ﻿four times as “John” (Revelation 1:1, 4, 9; 22:8). “﻿﻿From the first century to the present, orthodox Christians have almost unanimously agreed that he is the Apostle John. Dionysius was the first to dispute the Johannine authorship, and did so on the grounds that he disagreed with the book’s theology and found many inaccuracies in its grammar. These objections were disregarded in the early church by most of the important fathers such as Justin Martyr, Irenaeus, Tertullian, Hippolytus, Clement of Alexandria, and Origen… ﻿Practically all scholars today who accept the divine inspiration of the﻿ Book of Revelation also accept John the Apostle as its author. However, Erasmus, Luther, and Zwingli questioned the Johannine authorship because it teaches a literal 1,000-year reign of Christ.” 12

The many allusions to the Old Testament found in the book of Revelation, as well as the style of writing, suggest the author was a Jewish Christian from Palestine. According to early church tradition, the apostle John ministered from about AD 70–100 in Asia Minor—the location of the “seven churches in Asia” (Revelation 1:4, 11; 2:1–3:22). Thus, these believers would have been well acquainted with him. 13

DATE: ﻿ Some of the early church fathers (Clement of Alexandria, Eusebius, Irenaeus, and Victorinus) wrote that the Apostle John experienced exile on the island of Patmos during Domitian’s reign (Revelation 1:9). 14 They wrote that the government allowed John to return to Ephesus after Emperor Domitian’s death in A.D. 96. As a result, many conservative Bible scholars date the writing of this book near A.D. 95 or 96. 15

“Revelation begins by showing what the Judge is like (chap. 1). Then the book gives an in-depth look at the Judge in His dealings with three groups—(1) the local assemblies of believers (chaps. 2-3), (2) rebellious mankind (chaps. 4-19), and (3) the lost of all the ages (chap. 20). Once the Judge has completed His work of judgment, we observe the aftermath of His judgments—the new heaven and earth—the glorious and eternal dwelling place ﻿of Christ and His people (chaps. 21-22). This inspired book has enriched and encouraged the lives of God’s people for centuries, especially believers who are surrounded by trouble and persecution.” 17

The assurance that Christ will ultimately judge the wicked and reward the godly, motivates believers in Jesus to remain faithful to Him until the end of their lives on earth. Such faithfulness to Christ will distinguish them as “overcomers” (Revelation 2:7, 11, 17, 26; 3:5, 12, 21; 21:7), and will result ﻿in many rewards, including ruling with Christ forever (Revelation 2:25-27; 3:21; 22:5).

Prayer: Lord God, it is with great anticipation that we approach the book of Revelation. Thank You so much for preserving this book which encourages us to remain faithful to the King of kings and Lord of lords, Jesus Christ, until our lives end here on earth. Please help us to be humble as we study each verse, knowing that God the Holy Spirit is our Ultimate Teacher. Open our hearts to see Your heart in every verse. You never intended for this book to cause division or doubts among Your people. You intended for this book to reveal Jesus Christ in such a powerful way that…

– we have hope for today.

– any fears we have about the future will be removed.

– we have greater motivation to live for Him in light of future rewards.

– we have a greater desire to worship Him Who will triumph over evil!

In the mighty name of the King of kings and Lord of lords, we pray. Amen.

3. An example is when Revelation 12 sign proponents claimed that the sun, moon, and stars alignment with the woman in Revelation 12 would be literally fulfilled on September 23, 2017, and that this will be the sign heralding the rapture of the church (Retrieved from a retrochristianity.org article on August 7, 2017). Another example is when Harold Camping set dates twice in 2011 for the Rapture of the Church (see Mark Hitchcock, The End: A Complete Overview of Bible Prophecy and the End of Days [Carol Stream, IL: Tyndale House Publishers, Inc., 2012 Kindle Edition], pp. 197-198). William Miller, founder of the Millerites, predicted Christ’s return between March 21, 1843 and March 21, 1844. But it did not happen. Later, another Millerite, Samuel S. Snow, predicted Christ’s return to earth on October 22, 1844. When it didn’t happen, many left Christianity (Retrieved on September 18, 2021, from Wikipedia article entitled, “William Miller (preacher).”