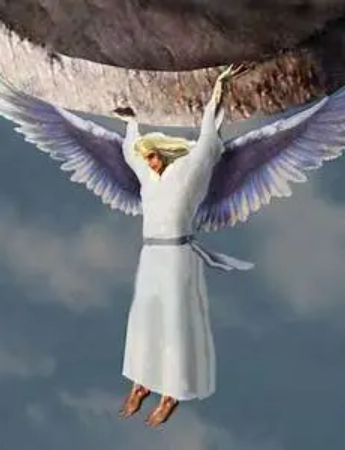 “Then a mighty angel took up a stone like a great millstone and threw it into the sea, saying, ‘Thus with violence the great city Babylon shall be thrown down, and shall not be found anymore.’” Revelation 18:21

The third angelic announcement of Rome’s (“Babylon”) judgment in Revelation 18 is now recorded by the apostle John (18:21-24). The first two announcements depicted the rapidity of God’s judgment of Rome (18:1-19) whereas this last announcement describes its finality. 1 “Then a mighty angel took up a stone like a great millstone and threw it into the sea, saying, ‘Thus with violence the great city Babylon shall be thrown down, and shall not be found anymore.’” (Revelation 18:21). The “violence” and finality of Rome’s destructionis graphically portrayed by “a mighty angel” throwing “a great millstone… into the sea.”

In John’s day, millstones often measured four to five feet in diameter, were one foot thick, and weighed thousands of pounds (cf. Mark 9:42). 2 As it would be impossible for such a huge stone to float to the surface of the ocean, so certainly the religious and economic system of Rome that had deceived and misled this world throughout human history, will sink to the bottom of the sea never to rise again. 3 The phrase “and shall not be found anymore” contains two doubt negatives in the Greek text (ou mē), emphasizing the finality of Rome’s judgment.

The prophet Jeremiah announced a similar kind of judgment against Judah for her disobedience: “8 Therefore thus says the Lord of hosts: ‘Because you have not heard My words, 9 behold, I will send and take all the families of the north,’ says the Lord, ‘and Nebuchadnezzar the king of Babylon, My servant, and will bring them against this land, against its inhabitants, and against these nations all around, and will utterly destroy them, and make them an astonishment, a hissing, and perpetual desolations. 10 Moreover I will take from them the voice of mirth and the voice of gladness, the voice of the bridegroom and the voice of the bride, the sound of the millstones and the light of the lamp.” (Jeremiah 25:8-10).

Instead of focusing on the Giver, Rome and all its followers had focused on the gift. Instead of worshiping the Creator, they worshiped the creation. In case you think such a sudden and violent judgment is unfair or too harsh, the mighty angel gives two reasons for Rome’s judgment. “23b For your merchants were the great men of the earth, for by your sorcery all the nations were deceived. 24 And in her was found the blood of prophets and saints, and of all who were slain on the earth.” (Revelation 18:23b-24). Through Rome’s businessmen (“merchants”) she will cast a materialistic spell (“sorcery”) over humankind so that “all the nations were deceived.” 6 The word “sorcery” (pharmakeia) is where the English word “pharmacy” comes from.

“If one is puzzled over the connection between medicine and sorcery as illustrated by this word (our pharmacy), he has only to recall the quackery today in medicine (patent medicines and cure-alls), witch doctors, professional faith-healers, medicine-men in Africa. True medical science has had a hard fight to shake off chicanery and charlatanry.” 7

Rome’s worldly luxuries and pleasures had deceived the nations of the world into believing that joy, security, and meaning in life come through the accumulation of material wealth instead of through their Creator God. Papal Rome has also grown wealthy with its focus on paying money for forgiveness (indulgences). For a fee, parishioners could get a deceased family member out of Purgatory and save up for their own future sins. 8 Selling forgiveness is what sparked the Protestant Reformation. 9

The second reason for Rome’s severe and final judgment is because “in her was found the blood of prophets and saints, and of all who were slain on the earth” (18:24).

“Not surprisingly, worship of the wrong object (wealth) is accompanied by wrath misdirected at the improper target (Christians). In the Antichrist’s kingdom, as with other godless societies, throughout history, the blood of prophets and saints testifies to the slaughter of those who stand for God’s values in opposition to the religion of materialism.” 10

When people worship the creation instead of the Creator, they no longer value human life as God does. We see this in America as our educational institutions have taught evolution for decades now which leaves God out of the picture and worships His creation. As a result, this country has murdered an estimated 62 million unborn babies through abortion since legalizing abortion on demand in 1973. 11 Even now state legislatures are about to vote on bills sponsored by Planned Parenthood that could legalize the killing of newborn babies up to 28 days after birth. 12

Rome’s sudden and violent destruction is also due to her killing God’s people, including “prophets and saints” (18:24). For centuries, pagan and papal Rome has seduced people away from the true God with her rituals and superstitions and has persecuted those who proclaim the truth exposing her materialistic and idolatrous false religion. History shows that the Roman Catholic Church has shed the blood of many believers and victims of the Crusades and Roman Inquisition. 13But the height of Rome’s hostility toward God’s people will take place during the Tribulation period when she vehemently opposes God’s prophets and saints on the earth. Because Rome has shed the blood of God’s children, and led others to do the same, she “will receive the death penalty from God’s hand. She will not be found anymore!” 14

How can we reach materialistic people with the gospel of Jesus Christ before it is too late for them? We look to Jesus’ example. After Jesus had miraculously fed thousands of people with five loaves of bread and two sardine-sized fish (John 6:1-14), He crossed over to the other side of the lake only to encounter the same crowd again (John 6:15-25). These people were like most materialistic people today. Like the beneficiaries of Rome, they were more interested in satisfying their physical appetites than their spiritual appetites, so Jesus confronts their selfish desires. “Most assuredly, I say to you, you seek Me, not because you saw the signs, but because you ate of the loaves and were filled.” (John 6:26). Christ is saying, “You came not because you understand Me to be the Messiah-God but because you wanted another free meal.” To this crowd, life was all about keeping alive, being healthy and well fed, and economically sufficient.

In an essay written by George Orwell, he describes a wasp that (as he puts it) “was sucking jam on my plate and I cut him in half. He paid no attention, merely went on with his meal, while a tiny stream of jam trickled out of his severed esophagus. Only when he tried to fly away did he grasp the dreadful thing that had happened to him.”  15

This wasp and people without Jesus have much in common. Severed from their souls, but greedy and unaware, people continue to consume life’s sweetness. Only when it is time to fly away will they grasp their dreadful condition. Jesus encourages the materialist to seek after something better. To seek after bread which lasts and produces life which never ends.

Jesus tells the materialist how to satisfy his spiritual hunger and thirst forever, and it is not through the accumulation of wealth or buying your forgiveness as Rome taught. Jesus said, “I am the bread of life. He who comes to Me shall never hunger, and he who believes in Me shall never thirst.” (John 6:35). The materialist hungers and thirsts for power… possessions… and popularity! But the greatest hunger and thirst of all is for immortality. Jesus says to look to Him in faith to satisfy our hunger for immortality. Look to Him in faith to quench our thirst for eternal life.

What do you do when you are hungry? You eat. What do you do when you are thirsty? You drink. Jesus says that if we come to Him in faith, we will never hunger for eternal life again. If we believe in Him, we will never thirst for eternal life again. One bite of the bread that Jesus’ offers, one drink of the water that Jesus offers, satisfies our spiritual hunger and thirst forever. This is difficult for the materialist to do. He has always provided for his own needs, and now he is being challenged to trust Someone outside of himself for his most important need.

Has your hunger or thirst for immortality been satisfied forever? Do you know for sure that you have eternal life? If not, why not take Jesus Christ at His word right now? Place your trust solely in Him to save you. Give up confidence in anything else: your prayers, giving of money, church attendance, baptism, obedience, commitment, or the reformation of your life. Jesus Christ guarantees eternal life to all who believe in Him alone for it.

Let us share this message gladly and often. It is glorious news! It is the greatest news! Tell people eternal life is a free gift and that the sole condition for receiving it is believing in Christ alone. Leave the results to God. After all, eternal life is the gift of God. He is the One giving the gift.

Prayer: Father God, give us a love for the self-reliant religious people of this world. Increase our burden for the materialistic people of our community. Give us the courage to confront their selfish desires, to correct their misconceptions about salvation, and to challenge them to believe in Jesus Christ alone for eternal life so that they can discover the joy of everlasting security in Him. Security that cannot be lost or taken away. Lord, I pray that those of us who know You will seek satisfaction in our relationship with You and not the things of this world. Enable us to live in light of eternity. In Jesus’ mighty name we pray. Amen.

12. Taken from an email on April 21, 2022, from American Center for Law and Justice’s Executive Director, Jordan Sekulow.