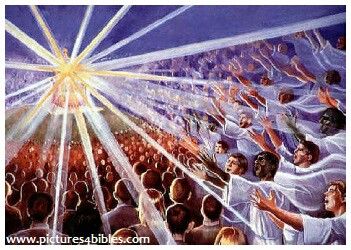 “After these things I heard something like a loud voice of a great multitude in heaven, saying, ‘Alleluia! Salvation and glory and honor and power belong to our God!’” Revelation 19:1

“The classic science-fiction adventure Star Wars ends with the dazzling destruction of the Death Star – a moon-sized space station that had terrorized the galaxy as a symbol of evil and tyranny. The epic trilogy The Lord of the Rings climaxes with the cataclysmic destruction of the dark tower of Mordor – the center of the demonic Dark Lord Sauron’s evil oppression.” 1

In a similar way, the obliteration of Rome (“Babylon”) represents the destruction of everything that is evil and demonic in the current world system. So, it should not surprise us when something as decadent as Rome and its religious/economic system comes to an end, all of heaven will celebrate with a jubilant chorus of hallelujahs. Even in the fictional realms of Star Wars and The Lord of the Rings, the victory over evil causes great rejoicing among those who are triumphant. 2

Following the destruction of the great harlot (Rome) which caused the people of the world to grieve deeply and be distressed (18:1-24), we see a much different response to Rome’s destruction in heaven (19:1-10). All the inhabitants of heaven are praising God for what He has done to Rome. As the Tribulation period is coming to an end, the focus in heaven is on God and the nearness of the Second Coming of Jesus Christ to earth.

This heavenly choir is saying, “Alleluia! Salvation and glory and honor and power belong to our God!” The word transliterated “Alleluia” is from the Hebrew compound word: “hallal” (praise) and “Yah” (an abbreviated form of Yahweh). 4 Hence, the word means “praise Yahweh” or “praise the Lord.” The only four occurrences of “Alleluia” in the New Testament are in this section (19:1, 3, 4, 6) although it does occur often in the Psalms. 5This is the biblical Hallelujah Chorus! 6

“Praise” “is the declaration of the glory, greatness, power, and majesty of God, and there is no such thing as silent praise. Unlike worship, which can occur quietly within a believer’s heart, praise in Scripture often is tied to our lips (e.g., Ps. 34:1; 51:15; 119:171). God is not untoward in demanding praise because He is worthy of it. Hundreds of thousands of people attend parades to celebrate championship sports teams, yet God is infinitely more worthy of celebration than any athlete.” 7

This is why we see the inhabitants of heaven crying out, “Salvation and glory and honor and power belong to our God!” Barclay notes, “The salvation of God should awaken the gratitude of man. The glory of God should awaken the reverence of man. The power of God is always exercised in the love of God, and should, therefore, awaken the trust of man. Gratitude, reverence, trust – these are the constituent elements of real praise.” 8

There are two reasons why heaven praises God. “For true and righteous are His judgments, because He has judged the great harlot who corrupted the earth with her fornication; and He has avenged on her the blood of His servants shed by her.” (Revelation 19:2). The first reason heaven praises God is because “His judgments,” including His annihilation of “the great harlot,” are “true and righteous” (19:2a). The word “true” (alēthinai) conveys that God’s judgments are totally in line with the truth of His Word. The Lord did what His Word said He would do. 9

In addition, God’s judgments are also “righteous” (dikaiai) which carries the idea that God is fair and just in carrying out these judgments. 10 For centuries, pagan and papal Rome seduced people away from the true God with her rituals and superstitions to worship false gods (“fornication”). Her worldly luxuries and pleasures had deceived the nations of the world into believing that joy, security, and meaning in life come through the accumulation of material wealth instead of through their Creator God. God was just to judge her severely for these decadent things.

The second reason God is to be praised for these judgments is because “He has avenged on her the blood of His servants shed by her” (19:2b). Thousands of years ago, the Lordsaid He would judge those who shed the blood of His servants (cf. Deuteronomy 32:42-43), 11 and now He has fulfilled His promise by judging Rome (“her”) for killing His “servants.” For centuries, pagan and papal Rome persecuted those who proclaim the truth exposing her materialistic and idolatrous false religion. History shows that the Roman Catholic Church has shed the blood of many believers and victims of the Crusades and Roman Inquisition. 12But the height of Rome’s hostility toward God’s people will take place during the Tribulation period when she vehemently opposes God’s people on the earth. Rebellious humankind who witnessed God’s judgments blasphemed His name (cf. Revelation 16:9, 11, 21); but the heavenly multitude praised Him because His wrath was “true and righteous.” 13

Another burst of praise breaks forth from the heavenly multitude. “Again they said, ‘Alleluia! Her smoke rises up forever and ever!’” (Revelation 19:3). This encore heightens the first burst of praise.14All of heaven praises God a second time for the finality (“rises up forever and ever”)of Rome’s destruction (“her smoke”). Never again will Rome be able to shed the blood of God’s people.

All God’s decisions are “true and righteous” even when a romance does not blossom as we had hoped, or a job interview does not turn out the way we thought it would. It is important to remember that God is worthy of our admiration and trust even when the effects of sin endanger our families, when pain drives us to our wits’ end, or when misfortune is about to push us over the edge. God gives and He takes away (Job 1:21). 16 He is honored when we return to Him, when we release our worries to Him, and when we rest in Him.

Prayer: Heavenly Father, what a contrast You have shown us between the mourning of the people on earth after Rome’s destruction and the celebration of the inhabitants of heaven. The difference is on each group’s focus. Those on the earth were paying attention to what was lost. But those in heaven were focused on what they had – a God Who is worthy of all praise. Father, whether our lives are filled with grief or gladness, You alone deserve our praise. Thank You for reminding us of this today. May we live our lives focused on who You are and what You have done. In the mighty name of Your Son, Jesus Christ, we pray. Amen.