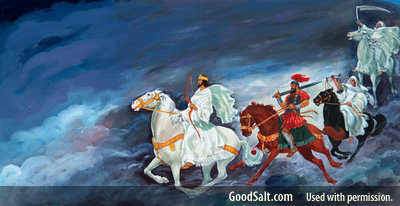 “And I looked, and behold, a white horse. He who sat on it had a bow; and a crown was given to him, and he went out conquering and to conquer.” Revelation 6:2

﻿“Our daily rituals are often the same, day in and day out. Wake up. Get up. Wash and dress. Eat breakfast if there’s time. Dash off to school or work or other activities. We expect our routines to be the same every day. However, each one of us has experienced an unexpected disruption along the way. A flat tire, a sick child, a fender bender, a phone call out of the blue relaying tragic news: Situations like these interrupt our routines with unwelcome stress, even severe trials. Occasionally these unexpected events can overturn our entire lives.

“Some people completely deny that God would ever judge anybody for anything. After all, they reason, isn’t God a loving God? Doesn’t He abound in mercy? Whatever happened to divine compassion and forgiveness? Clearly, God’s coming judgment strikes at the very heart of our theology, ﻿our view of the nature and character of God Himself. It’s no wonder that people find much that is disturbing to them in the book of Revelation. Yet when we discover that God’s mercy and wrath work hand in hand and that God will bring about redemption through judgment, we will have a much clearer and more balanced understanding of the God we love and serve.” 1

﻿In Revelation 4 and 5, John saw God the Father sitting on His throne in His heavenly throne room holding the seven-sealed scroll containing judgments to be unleashed on rebellious humankind during the early part of the Tribulation period on earth (Revelation 6:1-8:2). ﻿Only one Person in the universe – Jesus Christ – was found worthy to take that scroll, to open its seals, and to begin the process of taking control of the world from evil and forever conquering sin and death. However, the steps necessary for preparing the world for His Kingdom on earth would involve a period of unparalleled judgment and suffering. 2

The subject of Revelation 4 and 5 was worship in heaven. But beginning in Revelation 6 the subject changes to wrath being poured out on the earth. 3 ﻿

“With the opening of the first seal, the tribulation period begins on earth—a seven-year span following the rapture of the church in which God brings judgment to earth in order to reclaim it. Once the church is in heaven and worshiping around God’s throne, divinely wrought calamities will come upon the earth.” 4

Next John writes, “And I looked, and behold, a white horse. He who sat on it had a bow; and a crown was given to him, and he went out conquering and to conquer.” (Revelation 6:2). Among the numerous interpretations of this verse, the two most common understand the white horseman to refer either to Jesus Christ 7 or to the Antichrist. 8

It is best to understand that the rider on this “white horse” is the Lord Jesus Christ for the following reasons: 9

1. None of the symbolic elements of this first horsemen are found anywhere else in the Bible describing the world-ruler or Antichrist. However, every feature of this vision is found elsewhere in the Bible in connection with the Lord Jesus Christ (cf. Zechariah 1:7-11; Psalm 45:4-6; Revelation 19:11-21).

3. When comparing the first vision of Zechariah with Revelation 6:1-8, it is significant to observe that the first “man riding on a red horse” that “stood among the myrtle trees” (Zechariah 1:8), was none other than “the Angel of the Lord” or the preincarnate Christ (cf. Zechariah 1:11). Hence, the first horseman of Zechariah’s vision is the Son of God.

4. Psalm 45, a Messianic Psalm, is parallel in thought to Revelation 6:2 (“he went out conquering and to conquer”) when it reads, “And in Your majesty ride prosperously” (Psalm 45:4). This parallel becomes more noteworthy when the Psalmist describes this prosperous ride with the words, “Your arrows are sharp in the heart of the King’s enemies; the peoples fall under You” (Psalm 45:5), for the first rider of Revelation 6 is armed with a “bow” (6:2). The ultimate victory of the rider of Psalm 45 is no different than that for which the first horseman of Revelation 6 goes forth, for the Psalmist continues, “Your throne, O God, is forever and ever; a scepter of righteousness is the scepter of Your kingdom.” (Psalm 45:6). These words, applied to the Son of God in Hebrews 1:8, can also be seen in the first horseman of Revelation 6 being connected to God’s throne in Revelation 5. The first horseman of Revelation 6 can be seen advancing the cause of God’s throne whereby the ultimate victory of Jesus Christ would then be in the final and eternal establishment of the throne of God and of the Lamb.

6. The differences between the first horseman of Revelation 6 and the last horseman of Revelation 19 can be adequately explained. First, there is the matter of the first horseman having a “bow” (6:2) in contrast to the last horseman having a “sword” (19:15). “The bow is the weapon of long-range warfare, whereas the sword is the weapon used in close combat with the enemy. If the rider of 6:2 represents Christ as the Initiator of all God’s judgments upon His enemies, it is clear that throughout the Tribulation He fights with them, so to speak, at long range. For the judgments of the Tribulation are such as fall from heaven to earth while the King is absent. But in chapter 19, the King comes personally to earth and now the conflict with the forces of evil is waged at close quarters and, with the sword, the last battle is won. And just quite naturally the sword is thought in connection with His Word – for it proceeds out of His mouth – so also may the bow be linked with the same Word. As the prophet Habakkuk has written, 12

“Your bow was made quite ready; oaths were sworn over Your arrows.” (Habakkuk 3:9). Hence, the judgment-bringing Word of God is seen first under the figure of a “bow” foreshadowing Jesus’ conquests over His enemies from long range in heaven (6:2) until the final battle when He returns in chapter 19 as the last, white-horsed Rider fighting and winning at close range with a sword in His hand (19:11-21). 13 The purpose of these long-range judgments from heaven is to bring Christ’s enemies into submission to Him (Hebrews 1:13) and to bring the nation of Israel to repentance (Daniel 9:24-27; Romans 11:26-27).

Another difference between the first and last Rider on a white horse is the one “crown” (stephanos) of 6:2 and the “many crowns” (diadēmata) of 19:12. It is important to realize that the first appearance of this Rider is separated from His last appearance by seven prophetic years. The stephanos is no less appropriate than the diadēmata, for the writer of Hebrews sees the Son of God already “crowned” (the verb form of stephanos, stephanoō) in glory and honor before His final victory (Hebrews 2:9). 14 The stephanos refers to “the crown of victory both for the victorious athlete in the games and for the triumphant general in war.” 15 The use of stephanos in Revelation 6:2 is appropriate in connection with the victory which is ascribed to this first horseman who goes “out conquering and to conquer.” His victory is certain and therefore He is crowned beforehand. But the “many crowns” of Revelation 19:12 representing kingly authority, 16 are equally appropriate where the emphasis falls upon the royal identity of the last Horseman Who is “KING OF KINGS AND LORD OF LORDS” (19:16).

The single “crown” (stephanos) represents the final all-conquering victory which the first Rider will achieve (6:2), while the “many crowns” (diadēmata)of 19:12symbolize the multiple victories over the kings and lords of the earth which flow from this victory. Hence, the “crown” (stephanos) of ultimate victory is followed by the “many crowns” (diadēmata) of universal authority. Regardless of whether it be the stephanos or diadēmata, it belongs alone to our Lord Jesus Christ. May God speed up His wearing of them both! 17

Prayer: Father God, as we watch the world spin out of control with evil and wickedness, we are encouraged to read this vision of the first Rider on a white horse representing the Lord Jesus Christ. His wearing of one crown reminds us that His victory over His enemies is certain. Following His removal of the church from the earth, He will begin a series of long-range judgments using His bow from heaven against rebellious humankind on earth to bring them into submission to His kingly authority and to bring the nation of Israel to repentance. His universal kingship will be fully realized when He returns to earth to defeat His enemies at close range using a sword at the end of the Tribulation period to establish His universal reign on the earth as King of kings and Lord of lords! Lord Jesus, we not only look to You to conquer evil and sin in the future, but we also trust You to lead us into victory over evil and sin in our own lives. In Your mighty name we pray King Jesus. Amen.