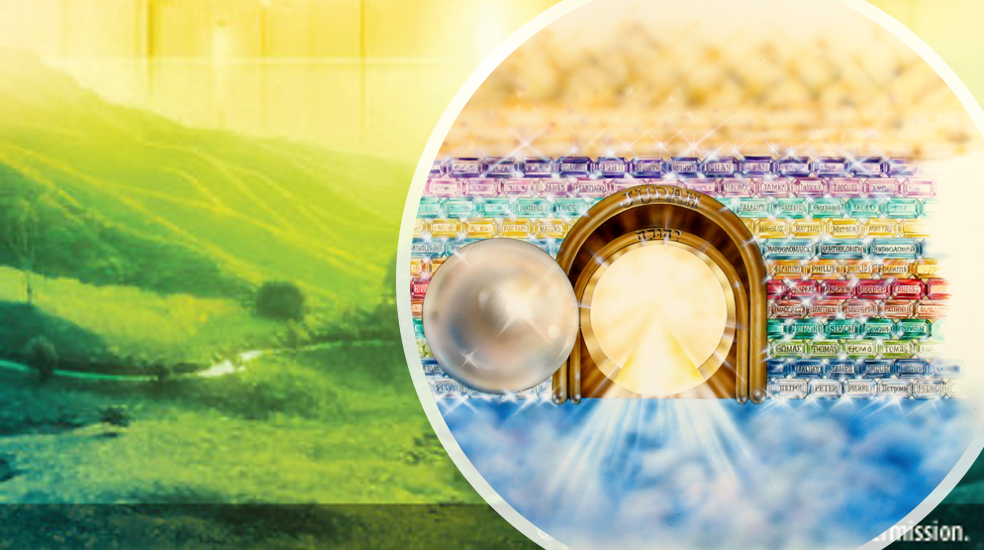 “The twelve gates were twelve pearls: each individual gate was of one pearl. And the street of the city was pure gold, like transparent glass.” Revelation 21:21

After discovering the shape and size of the New Jerusalem on the new earth during the final stage of heaven (21:15-17), the apostle John now describes the construction materials of this colossal city (21:18-21). He zooms in to take a closer look at the texture and color of the walls, gates, and foundations. 1 “The construction of its wall was of jasper; and the city was pure gold, like clear glass.” (Revelation 21:18). The word “construction” (endōmēsis) means “to build in,” suggesting the wall had jasper built into it and was not made of solid jasper. 2 John may have meant that the walls were overlaid with this brilliant material, 3 making the city walls appear to glisten like a perfect diamond. 4 When describing both the “jasper” and “gold,” John was using the language of appearance (“clear as crystal,” “like clear glass,” “like transparent glass”), since both metals apparently differed in appearances as we know them today (21:11, 18, 21). 5

The entire city appeared to shine as a mass of “pure gold” that was “like clear glass” (21:18b). “Clear glass” in John’s day was the best quality of glass, so when he compares the “pure gold” to “clear glass,” he may have meant that there was no impurity in the New Jerusalem. 6

Swindoll takes this reference to the city being “like clear glass” (21:18) to mean something different. He writes, “In our present fallen world, people build walls to maintain privacy and security. These can be physical barriers to keep curious onlookers from watching our every move, but they can also be mental, emotional, or spiritual walls that protect us from harm, hide our shame, or keep people at a distance from us relationally. This kind of secrecy and security will be unnecessary in the Celestial City. To a certain degree, Christians today can reflect the grace and glory of God, not by hiding in the ‘inner sanctuary’ of private life but by being transparent with others. This means keeping the inside as pure as the outside, then letting people see the glory of God shine through us.” 7

Next John zooms in on the foundation stones of the colossal city which reveal its permanence (Hebrews 11:10). “19 The foundations of the wall of the city were adorned with all kinds of precious stones: the first foundation was jasper, the second sapphire, the third chalcedony, the fourth emerald, 20 the fifth sardonyx, the sixth sardius, the seventh chrysolite, the eighth beryl, the ninth topaz, the tenth chrysoprase, the eleventh jacinth, and the twelfth amethyst.” (Revelation 21:19-20). The apostle names twelve precious stones, one different gem adorning each of the twelve foundations. Eight of these gems correspond to the stones of the high priest’s breastplate (Exodus 28:17-20). 8 Another view is that the jewels did not decorate the foundation stones, but the foundation stones were themselves whole gemstones. 9

These twelve foundation stones involve a different color: “jasper” is diamond, 10  “sapphire” is deep blue; the “chalcedony” comes from Chalcedon, Turkey and is basically blue with stripes of other colors. 11 The “emerald” is a bright green; the “sardonyx” is red and white; and the “sardius” is usually ruby-red in color, though it can have an amber or honey color. 12 The “chrysolyte” is a golden color, different from the modern chrysolyte stone which is pale green. 13 The “beryl” is a sea green; the “topaz” is a transparent yellow green; the “chrysoprase” is also green; the “jacinth” is violet in color; 14 and the “amethyst” is purple quartz. 15 Together these precious stones provide a brilliant array of beautiful colors, much like the rainbow’s colors.

Instead of there being one pearly gate as we are accustomed to hearing, there are twelve gates of pearl, three on each wall. “The twelve gates were twelve pearls: each individual gate was of one pearl.” (Revelation 21:21a). Each gate leading into the city was made of a single giant pearl.

“Among the ancients, pearls were ranked highest among precious stones, because their beauty derives entirely from nature, improvement by human workmanship being an impossibility.” 16

The significance of these gates of pearl is noted by John Philips: “All other precious gems are metals or stones, but a pearl is a gem formed within the oyster – the only one formed by living flesh. The humble oyster receives an irritation or wound, and around the offending article that has penetrated and hurt it, the oyster builds a pearl. The pearl, we might say, is the answer of the oyster to that which injured it.” 17

“The pearl represents pain resulting in beauty, suffering crowned with glory. When we read of this symbol of the pearl eternally embedded in the doorways of heaven, it should remind us that Christ’s suffering had an eternal purpose and opened heaven for us (John 10:9; 14:6). It also assures us that our own suffering for the sake of Christ has a purpose and can be used by Him to reflect His glory in our lives (Romans 5:3-5; Philippians 3:8-11; James 1:2-4).” 18

In addition to the gates of pearl, John describes the street of the New Jerusalem. “And the street of the city was pure gold, like transparent glass.” (Revelation 21:21b). People frequently talk about the streets of gold in heaven, but there is only one “street” or pavement “of the city.” Everyone living in the New Jerusalem will live on Main Street. 19 The street in our eternal home will not consist of gravel, nor of tar, nor cement or asphalt, 20 but of “pure gold, like transparent glass.” This “street will be paved with gold polished to mirror brilliance. Gold is so plentiful to the Creator that He uses it to pave His street.” 21

“In the New Jerusalem the materials we adore the most in this world will be put to common use. The marble-paved streets of Ephesus, where the apostle John lived out his days, were unusually extravagant, earning Ephesus a reputation as one of the most opulent cities of the Roman Empire. But the opulence of the New Jerusalem will far exceed that of Ephesus or any other city. Gold will be trodden upon like asphalt. There will be no vanity, no materialism, no envy, or greed. Best of all, no one will be poor in a place that paves its streets with gold.” 22

Can you imagine approaching the New Jerusalem and seeing it from a great distance? A remarkable city over 14,000 miles long, wide, and high being built upon gemstone foundations, each gate brilliantly crafted from a single giant pearl, with a street poured from the purest gold. One day all who have believed in Jesus Christ for His gift of eternal life will be able to walk into this magnificent city with jaws dropped and eyes widened in absolute wonder, for even the most beautiful places on earth do not compare to what the Lord Jesus is preparing for those who believe in Him.

Getting right with God is not based upon behaving, but upon believing in Jesus Christ “who justifies the ungodly.” It does not matter how well you have behaved; you are still “ungodly” before a holy God. You may say, “Well, I’m not as bad as him or her.” You need to understand that God is not comparing your life to other sinful people. He is comparing your life to the only perfect Person who has ever lived on earth – Jesus Christ. The Bible says, “For all have sinned and fall short of the glory of God” (Romans 3:23). Jesus never told a lie, but you have told many. Jesus loved everyone, including His enemies. But you have days you cannot stand to be with your own family. The good news is that the moment you believe or trust in Christ alone who paid the full penalty for your sin when He died on the Cross and rose from the dead (I Corinthians 15:3-6), God “justifies” you which means He declares you to be totally righteous as if you had never sinned.

The fact is that all people are “ungodly” sinners who deserve to be separated from God forever in a terrible place called the “lake of fire” (Romans. 3:9-23; Revelation 20:15). But the moment you believe in Jesus Christ alone, God gives you a right standing before Him as “your faith is accounted for righteousness.”

God now invites you to come to Him on His terms. He doesn’t say to behave or “work,” He says to “believe” in His only perfect Son, Jesus Christ, who died in your place on a cross and rose from the dead. All of us are “ungodly,” and we need to believe or trust in our only Savior, Jesus Christ. The moment we do, God declares us to be totally righteous in His eyes so He can let us enter the New Jerusalem on the new earth in the final stage of heaven.

You can tell God through prayer you are now believing in Jesus to give you His gift of righteousness so you can be accepted by God and enter His heaven.

Prayer: Dear God, thank You for showing me that I could never live up to Your standards of holiness. Thank You for sending Your only perfect Son, Jesus Christ, Who did live up to Your standards of holiness because He is God. And He lived a perfect life and then died in my place on a cross and three days later rose from the dead so that He is alive today. I am now believing in the risen Lord Jesus for His gift of righteousness and eternal life. Thank You God for declaring me to be totally righteous the moment I believed in Jesus. Thank You that I am totally accepted by You and I can now enter Your heaven in the future. Please use me to share this good news with others who are trying to behave instead of believe to enter Your heaven. In the mighty name of the Lord Jesus Christ, I pray. Amen.

When you believed in Jesus, God declared you to be totally righteous in His eyes. You are now covered by the righteousness of Jesus Christ so that God sees all the beauty, holiness, and goodness of His Son when He looks at you (Romans 8:31-38). God can now permit you to enter His heaven based on your faith in Jesus Christ and what He did for you on the cross. Now that you know you will be living in a magnificent and beautiful city and world – apart from any evil – in the presence of Jesus Christ, this can encourage you to endure difficulties in this life knowing what awaits you afterward. 24