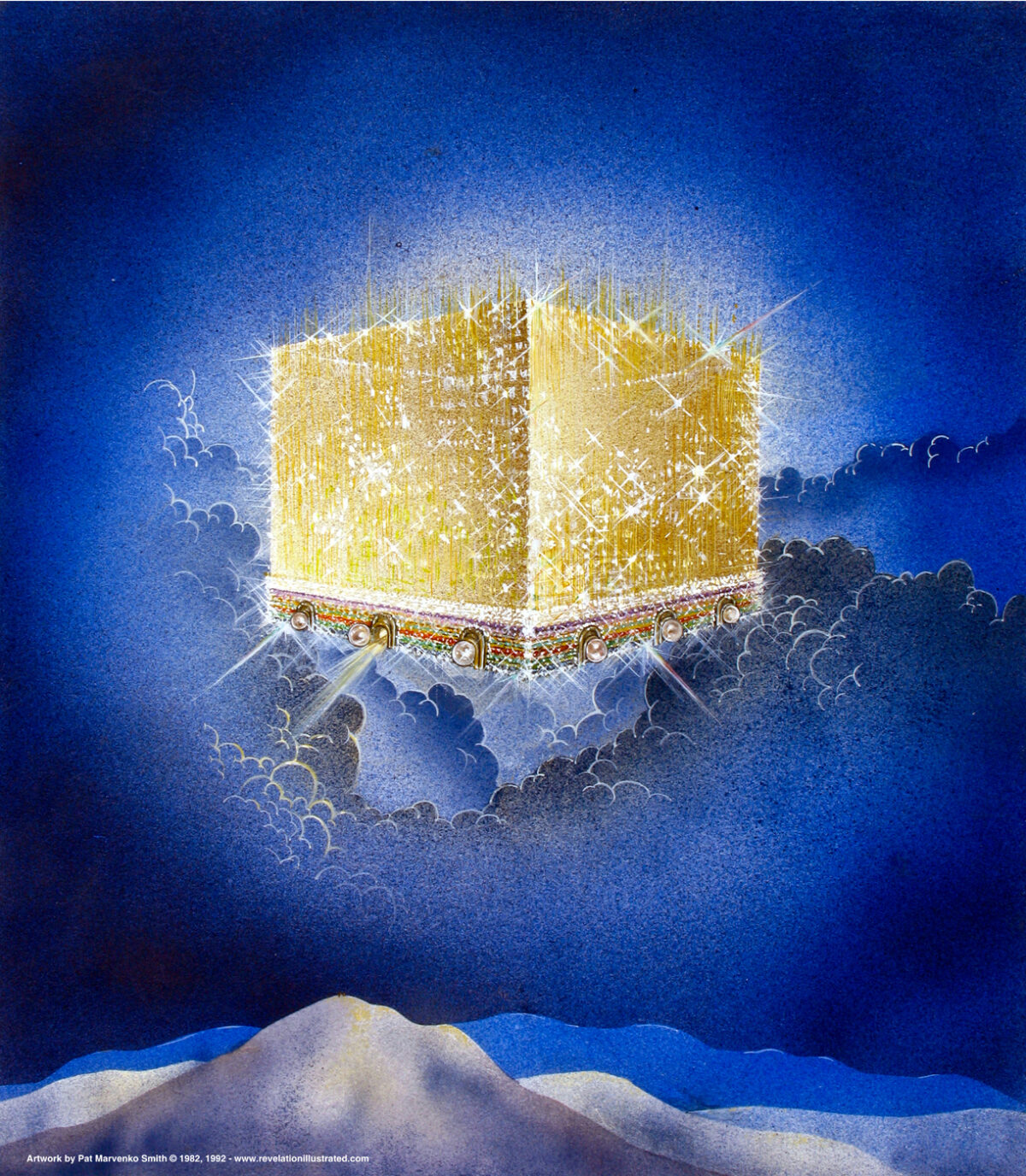 “Then I saw the holy city, New Jerusalem, coming down out of heaven from God, prepared as a bride adorned for her husband.” Revelation 21:2

After the apostle John begins to receive a new vision of what heaven will be like (21:1), he sees a specific feature of “the new heaven and new earth.” John then sees “the holy city, New Jerusalem, coming down out of heaven from God” (21:2a). The “New Jerusalem” is called “the holy city” in contrast with the earthly Jerusalem that existed as the capital city of the Millennial Kingdom of Christ. 1 That earthly Jerusalem will be destroyed at the end of the Millennium when the old heaven and earth are destroyed by fire (21:1b; cf. 2 Peter 3:10-13).

“A holy city will be one in which no lie will be uttered in one hundred million years, no evil word will ever be spoken, no shady business deal will ever even be discussed, no unclean picture will ever be seen, no corruption of life will ever be manifested.” 2

When God creates “the new heaven and earth” (21:1) He will send the “New Jerusalem… down out of heaven from God” to the new earth (21:2a). The fact that this city is mentioned in conjunction with the new earth, and it has huge foundation stones (21:14) implies that it will rest on the new earth. 3 Just as the earthly Jerusalem was Christ’s capital city of the Millennial Kingdom, so the “New Jerusalem” will be Jesus’ capital city of the new earth. 4 Jesus has already mentioned this new city when He said, “He who overcomes… I will write on him the name of My God and the name of the city of My God, the New Jerusalem, which comes down out of heaven from My God.” (Revelation 3:12).

John describes the New Jerusalem as a city “prepared as a bride adorned for her husband” (21:2b). The word “prepared” (hetoimázō) is the same word Jesus used in John 14:2-3 when He said to His disciples, “2 In My Father’s house are many mansions; if it were not so, I would have told you. I go to prepare [hetoimázō] a place for you. 3 And if I go and prepare [hetoimázō] a place for you, I will come again and receive you to Myself; that where I am, there you may be also.” (John 14:2-3). In Revelation 21:2, the word “prepared” (hētoimasmenēn)is in the perfect tense, meaning that Christ has been preparing this city for believers since He ascended to heaven after His death and resurrection, and He continues to prepare this place to the present. For centuries the Lord Jesus has been preparing this incredible place for His “bride” to be inhabited by His church consisting of Jewish and Gentile believers from the church age (21:2b; cf. 2 Corinthians 11:2: Ephesians 5:27). This magnificent city has been “adorned” (kosméō)or “made to have an attractive appearance through decoration”7 “for her husband,” King Jesus (21:2b; cf. Revelation 19:7-9).

God created the earth in six days (Genesis 1:1-31), but Jesus has been preparing our place in heaven for almost two thousand years. Remember, Jesus was the Son of a carpenter (Matthew 13:55; Mark 6:3) – so heaven is going to be a fantastic place – a real place. We will look at the specifics of this wonderful place later in our study of the book of Revelation.

Currently the New Jerusalem is being prepared by Christ in the third heaven (2 Corinthians 12:2) where God dwells with the immaterial parts (soul and spirit) of all believers in Jesus who have died 8 (John 14:2-3; 2 Corinthians 5:8; Philippians 1:23). When Jesus refers to this city as a prepared “place” (topos) in John 14:2-3, that Greek word specifically refers to a “locatable place.” 9 This assures us that heaven is a real, physical place.

But where exactly is heaven located now? We do not know the exact physical location of heaven right now, but we know that it is “up” since the Bible tells us at the ascension of Jesus that the angels of God told the watching followers of Christ, “This same Jesus, who was taken up from you into heaven, will so come in like manner as you saw Him go into heaven.” (Acts 1:11). Ephesians 4:10 also says, “He who descended is also the One who ascended far above all the heavens.” When Paul writes that Jesus “ascended far above all the heavens,” he is including the first heaven which includes the atmosphere surrounding the earth where we see the domain of the clouds and birds (Genesis 1:6-8, 20; Isaiah 55:9-10). This also includes the second heaven which consists of the domain of the sun, moon, stars, planets, and galaxies (Genesis 1:14-17). 10 So, we know that heaven is up above us.

The apostle Paul spoke of being “caught up to the third heaven” which he also referred to as “Paradise” (2 Corinthians 12:2-4), which is beyond the first and second heavens and is the current dwelling place of God 11 where believers in Jesus go when they die (cf. Revelation 4:1-4; Acts 7:55-56, 59; 2 Corinthians 5:8; Philippians 1:23). So even though we don’t know the specific location of heaven, we do know that it is a real physical place that Jesus is preparing for those who believe in Him (John 14:1-3). Christ will take believers there with either an angelic escort when we die (Luke 16:22a) or while we are still alive at the Rapture or sudden removal of the church from the earth prior to the seven-year Tribulation period (I Thessalonians 4:13-18; Revelation 4:1-4).

Are you prepared to enter Jesus’ heaven? If you don’t know for sure you will go to God’s heaven in the future, you can know for sure right now. It is important to understand our need to prepare to go to heaven. The Bible tells us, “For all have sinned and fall short of the glory of God.” (Romans 3:23). Does that include you and me? Yes, it includes all people. God demands complete perfection. But as sinners we have fallen short of that standard. All of us have sinned against God and deserve to be separated from Him forever (Romans 6:23a; Revelation 20:15).

To deal with our problem, God provided a Substitute. That Substitute was Jesus Christ who was one hundred percent perfect because He is God (John 1:1; I John 5:20). He had to take our punishment because one sinner cannot die for another. God allowed His only perfect Son to die in our place. The Bible says, “But God demonstrates His own love toward us, in that while we were still sinners, Christ died for us.” (Romans 5:8).

Years ago, a little girl was playing near a rock in her backyard. Underneath that rock was a rattlesnake. As she was playing, the snake lurched out and bit her in the leg. She fell to the ground dying. Her brother was standing a short distance away and saw what had happened. As soon as he saw her fall, he rushed over, and he sucked the venom from her leg. He didn’t know that there was an infection inside his mouth. The venom entered the infected area and in moments he died. He died, but his sister lived. Out of love for his sister, he took what would have caused her death and took it upon himself.

Because of the even greater love Jesus Christ has for us, He entered this world and took the sins that should have caused our death and placed them upon Himself. He became our Substitute. Because Jesus died, we can live forever.

Christ paid our sin debt in full (John 19:30). There is nothing left for you to pay. God can now offer eternal life freely – as a gift. That is why we are told, “the gift of God is eternal life in Christ Jesus our Lord” (Romans 6:23b). Gifts though, must be received and there is only one way to receive this gift. The hand that receives this gift is faith. Jesus promised, “He who believes in Me has everlasting life.” (John 6:47). To believe means to be persuaded that Jesus is speaking the truth and is therefore trustworthy. And then believing or trusting in Him alone to give us everlasting life as a gift so we can live with Him forever in His heaven.

If you have never received Christ’s free gift of eternal life, why not do so now? Simply take Jesus at His word when He says, “He who believes in Me has everlasting life,” and you will spend eternity in heaven with Jesus and all those who have believed in Him for eternal life. Here is how you can tell God in a simple prayer what you have just done.

Prayer: Dear Lord Jesus, I come to You now as a sinner. Nothing I am or do makes me deserve heaven. I now understand that You took my punishment when You died on the cross and rose again. I am now believing or trusting in You alone Jesus (not my good life, my prayers, or my religion), to give me everlasting life and a future home in Your heaven. Thank You for the gift of eternal life I just received and for the future home I will have in Your heaven. Please use me now to tell others how they can know for sure they will live with You forever. In Your mighty name I pray, Lord Jesus. Amen.