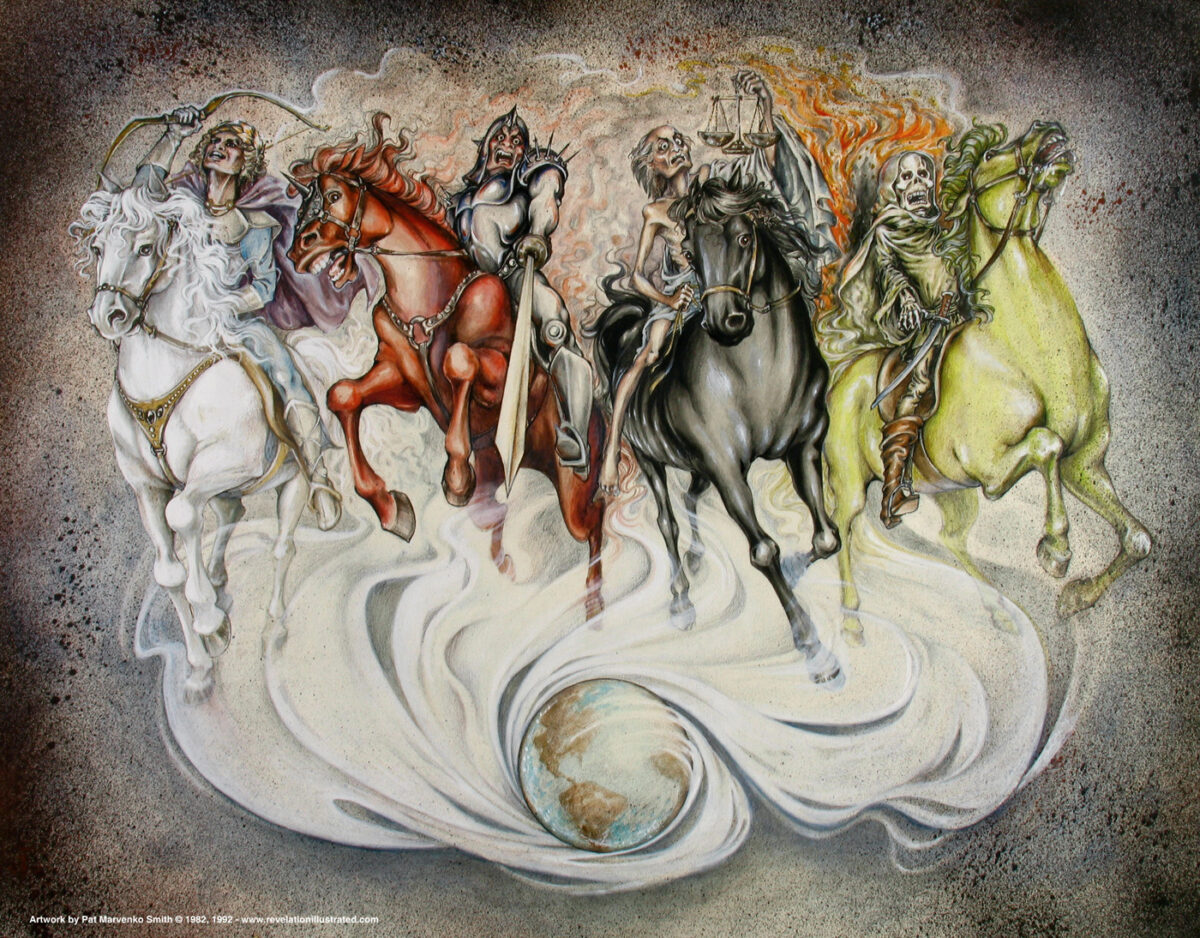 “So I looked, and behold, a pale horse. And the name of him who sat on it was Death, and Hades followed with him. And power was given to them over a fourth of the earth, to kill with sword, with hunger, with death, and by the beasts of the earth.” Revelation 6:8

In Revelation 6, ﻿after the church has been caught up to be with the Lord Jesus in heaven (Revelation 4-5; cf. I Thessalonians 1:10; 4:13-5:11), the seal judgments are opened by the Lamb, Jesus Christ, at the very beginning of the Tribulation (Revelation 6:1-2). 1 After the apostle John received the vision of the Lamb opening the first of seven seal judgments containing a Rider on a white horse representing the Lord Jesus Christ about to begin a series of long-range judgments using His bow from heaven against rebellious humankind on earth (6:1-2), he writes: “When He opened the second seal, I heard the second living creature saying, ‘Come and see.’ ” (Revelation 6:3). After the second seal is opened, “Another horse, fiery red, went out. And it was granted to the one who sat on it to take peace from the earth, and that people should kill one another; and there was given to him a great sword.” (Revelation 6:4).

This second seal judgment will “take peace from the earth.” ﻿As a result, murder, violence, and war run rampant as never before. 2 ﻿In His Olivet Discourse, the Lord Jesus revealed that during the initial stages of the seven-year Tribulation on earth, there will be “wars and rumors of wars.” (Matthew 24:6). He says, “Nation will rise against nation, and kingdom against kingdom.” (Matthew 24:7). Christ points out that such things ﻿will be “the beginning of sorrows.” (Matthew 24:8).

“Even though most commentators view the first half of the seven years as a time of peace, it is clear that ‘the beginning of sorrows’ includes a world completely given over to war and bloodshed. However terrible and destructive war is, the sorrows that follow are more catastrophic. The colossal bloodshed during these beginning stages is pictured by the fiery red horse and a great sword given to its rider.” 3

Next John writes, “When He opened the third seal, I heard the third living creature say, ‘Come and see.’ So I looked, and behold, a black horse, and he who sat on it had a pair of scales in his hand.” (Revelation 6:5). The opening of this third seal would usher in economic instability to the first half of the Tribulation period, a reality depicted by a “a black horse” with the rider holding a “pair of scales in his hand,” used to measure out basic commodity prices. 5

Then John “heard a voice in the midst of the four living creatures saying, ‘A quart of wheat for a denarius, and three quarts of barley for a denarius; and do not harm the oil and the wine.’” (Revelation 6:6). As a result of increasing warfare during the first half of the Tribulation period, there would be great famine and inflation (cf. Matthew 24:7), with food (“wheat… barley”) costing a day’s wages which was “a denarius” in Roman currency. 6 “In John’s day, a denarius would purchase eight to sixteen times as much food as what he said it will purchase in the future.” 7 Since war had caused food supplies to be greatly reduced, strict control was implemented (“do not harm [tamper] with the oil and the wine”) over prices (6:6; cf. Matthew 24:7).

The causes of the famine were not extremely severe, since they killed only “the wheat” and “barley,” but not the vines (“wine”) and olive trees (“oil”) whose roots go deeper. 8 As the Tribulation grows worse, the wealthy as well as the poor will suffer, but at this early stage, the poor will suffer more than the rich. 9

At the middle of the Tribulation period, “The Antichrist will be Satan’s CEO of the world’s economy. He will set interest rates, prices, stock values, and supply levels. Everything will be nationalized or internationalized and placed under his personal control. With the chaos created by the Rapture and the collapse of the world economy predicted in Revelation 6:5-6, people will be willing to give all power over to one man. Much like the Germans turned to Hitler after the runaway inflation in Weimar Germany, the world will turn to the man who seems to have answers for the crushing problems they’re facing. From the midpoint of the Tribulation until the second coming of Christ, no one will be able to buy or sell without the Antichrist’s permission (Revelation 13:16-17). People all over the world will be compelled to take his mark. His one-world economy will be run by his sidekick the false prophet (Revelation 13:11-18).” 10

Next John observes, “7 When He opened the fourth seal, I heard the voice of the fourth living creature saying, ‘Come and see.’ 8 So I looked, and behold, a pale horse. And the name of him who sat on it was Death, and Hades followed with him. And power was given to them over a fourth of the earth, to kill with sword, with hunger, with death, and by the beasts of the earth.” (Revelation 6:7-8). After the Lamb “opened the fourth seal,” John saw “a pale horse” whose rider “was Death, and Hades followed with him.” ﻿This judgment will reduce earth’s population on an unprecedented level; one-fourth of humanity will die – nearly two billion people if it happened today. 11 “Hades,” the place unbelievers go immediately after death (Luke 16:22-23), follows the rider named “Death. “This image reveals that as Death rides forth like a harvester among the grain, he scoops up victims and casts them into Hades’ sack.” 12

Jesus gave these enemies the “power” to kill “a fourth of the” world’s population through war (“sword”), famine (“hunger”), disease (“death”), and attacks by ferocious “beasts [animals] of the earth” (6:8b).

“﻿I must admit, it’s hard to come to terms with the severity of these judgments. This stampede of deception, wars, pestilence, death, and destruction make every tragedy we’ve seen in world history pale in comparison! Only the emotionally numb could fail to wonder, ‘How could God allow such things to happen, much less decree them?’  Where in the world is our loving heavenly Father?

“In the midst of our concern about these judgments, we must never forget that God is absolutely just and fair in punishing evil. Wickedness deserves to be judged. Yet in His abundant grace, God continually tempers His wrath and demonstrates ﻿demonstrates mercy. In fact, Jesus taught that God will even put a limit on the days of the Tribulation (Mark 13:20). This may not seem significant until we realize that, if He does not impose that limit, everyone in the world will perish!

“We should also recognize that most of the judgments in Revelation come through the work of evil agents. God allows evil in the world, but He is not the author of evil.” 13

“One theologian writes, ‘Specifically, it will not do to accuse God of evil intentions or malevolent acts. He is sovereign, but not blameworthy, for He is righteous in all His deeds (Ps. 11:7; Dan. 9:14). He oversees all things in accord with His will, but He is not the source, the cause, or the author of sin.’” 14

The fact that God reveals far in advance, the seriousness and severity of His future judgments against unbelief and sin, reminds us that His judgments never occur prematurely or haphazardly. This also shows His grace in allowing people ample opportunity to heed the warning and look in faith, to His Son (cf. 2 Peter 3:3-9). 15

Prayer: Father God, thank You for recording these severe judgments ahead of time so we can prepare by believing in Your Son, Jesus Christ, for His gift of salvation. For those of us who already believed in Jesus, please help us to warn others of what is coming so they can trust in Christ alone for their salvation and escape the coming wrath that will overtake this world with unprecedented suffering. In the mighty name of the Lord Jesus Christ, we pray. Amen.