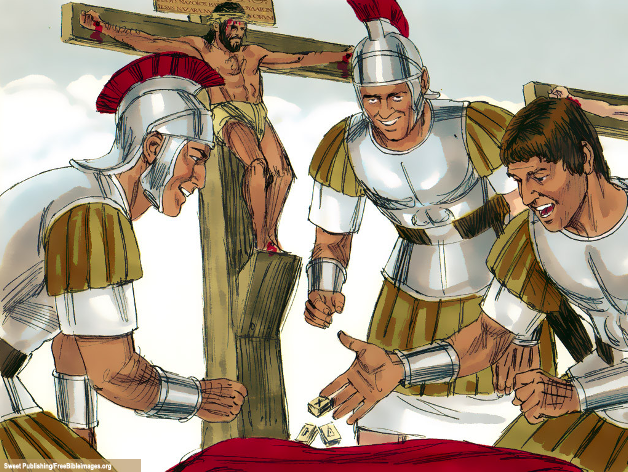 “Then the soldiers, when they had crucified Jesus, took His garments and made four parts, to each soldier a part, and also the tunic. Now the tunic was without seam, woven from the top in one piece.” John 19:23

We are discovering lasting lessons from the last day in Jesus’ life before His dead body is sealed in a tomb. Thus far we have learned the following:

– The two crosses teach that God gives each of us the freedom to choose (John 19:18b).

Today we discover in the seventh picture the apostle John presents to us, that JESUS’ GARMENTS WERE REMOVED SO WE COULD WEAR THE GARMENTS OF SALVATION (John 19:23-24). The words “when they had crucified Jesus” (John 19:23b) refer to the time when they nailed Jesus to the crossbeam and set the cross in place. 1  While Jesus is writhing in pain on the cross, John informs us, “Then the soldiers… took His garments and made four parts, to each soldier a part, and also the tunic. Now the tunic was without seam, woven from the top in one piece.” (John 19:23a, c).

Four Romans soldiers under the leadership of a centurion were assigned to each person being executed. “It would be the privilege of the soldiers conducting the execution by crucifixion to divide the personal property of the crucified among themselves. In keeping with custom therefore, the four soldiers took Jesus’ garments and divided them into four parts among themselves.” 2

It is significant to note that the Greek word for “garments” (hamatia) is plural. “When this word occurs in the singular it refers to the outer robe that most Jews wore. Here, because he used the plural, John evidently had in mind all of Jesus’ ‘outer garments,’ including His robe, sandals, belt, and head covering.” 3

The “tunic” (chitṓn) that was also removed from Jesus “was a garment worn next to the skin, but it was not what we would think of as underwear. It was more like a long shirt.” 4  The Jewish historian, Josephus, used this word to describe the high priest’s tunic that was woven in one piece (Antiquities 3.161). 5 This undergarment “was without seam, woven from the top in one piece,” and therefore, was more valuable. Not wanting to tear this expensive article of clothing, the soldiers “said therefore among themselves, ‘Let us not tear it, but cast lots for it, whose it shall be.’ ” (John 19:24a). What a contrast between the innocent Lamb of God who was nearly stripped naked before a watching world to bear the shame of all our sin while Roman soldiers ignore Him because they were more concerned about accumulating wealth.

The Bible often describes our behavior as the clothes we wear. For example, Peter encourages us to be “clothed with humility” (I Peter 5:5). King David writes of the wicked person, “As he clothed himself with cursing as with his garment.” (Psalm 109:18). Garments represent character, and like His tunic, Jesus’ character “was without seam, woven from the top in one piece.” (John 19:23a, c). Christ’s life was like His tunic: “uninterrupted perfection.” 6

When John says Jesus’ tunic was “woven from the top,” Lucado suggests it means  “Jesus wasn’t led by his own mind; he was led by the mind of his Father. Listen to his words: ‘The Son can do nothing on his own, but only what he sees the Father doing; for whatever the Father does, the Son does likewise’ (John 5:19 NRSV).

But when the Roman soldiers nailed Jesus to the cross, Christ took off His tunic of seamless perfection and put on a tunic of shame. Imagine what it was like for Jesus to be stripped down to a loin cloth in front of His own mother and loved ones. He was shamed before His family.

Jesus was also shamed before His accusers. While Jesus hung on the cross for a few hours, it seemed as though the religious leaders were the winners, and Christ was the Loser.

Jesus experienced the shame of all our sin while hanging on that cross in our place. Why? So we can wear the garments of salvation. His garments were removed so we can wear the robe of His righteousness. Only those who believe in Jesus alone for His gift of eternal life can say, “I will greatly rejoice in the Lord, My soul shall be joyful in my God; for He has clothed me with the garments of salvation, He has covered me with the robe of righteousness, as a bridegroom decks himself with ornaments, and as a bride adorns herself with her jewels.” (Isaiah 61:10).

The Bible tells us, “But to him who does not work but believes on Him who justifies the ungodly, his faith is accounted for righteousness.” (Romans 4:5). God clothes with His righteousness the person “who does not work.” Getting right with God is not based upon our works. It is based upon the finished work of Jesus Christ on the cross. If our works could gain us the robe of God’s righteousness, then there was no need for Jesus to remove His garments and die in our place.

God puts His robe of righteousness on the person who “believes on Him who justifies the ungodly.” Getting right with God is not based upon behaving, but upon believing in Jesus Christ “who justifies the ungodly.” It does not matter how well you have behaved, you are still “ungodly” before a holy God. You may say, “Well, I’m not as bad as him or her.” You need to understand that God is not comparing your life to other sinful people. He is comparing your life to the only perfect Person who has ever lived on earth – Jesus Christ. And the Bible says, we  “all have sinned and fall short of the glory of God.” (Romans 3:23). We all fall short of the seamless perfection of Jesus Christ.

The fact is that all people are “ungodly” sinners who deserve to be separated from God forever in a terrible place called the “lake of fire” (Romans. 3:9-23; Revelation 20:15). But the moment you believe in Jesus Christ alone, God gives you a right standing before Him as “your faith is accounted for righteousness.” He clothes you with His righteousness so that when He looks at your life, He sees the seamless perfection of His Son.

Even though it seemed like Jesus Christ had been defeated by wicked men as He suffered on the cross, John then reminds us that God is still in control when he writes, “that the Scripture might be fulfilled which says: ‘They divided My garments among them, and for My clothing they cast lots.’ Therefore the soldiers did these things.” (John 19:24b). The soldiers’ dividing of Jesus’ garments and casting lots for His inner tunic fulfilled the Messianic prophecy in Psalm 22:18. Satan has not won a victory here. God used the wicked actions of wicked people to provide for our salvation. 9

Even though Jesus was shamed before His family, His accusers, and before heaven, He did not let this shame keep Him from finishing His work on the cross. Hebrews 12:2 tells us, “Looking unto Jesus, the author and finisher of our faith, who for the joy that was set before Him endured the cross, despising the shame, and has sat down at the right hand of the throne of God.” Jesus “endured the cross” by “despising the shame.” The word “despising” comes from a compound Greek word, kataphronéō, which means “against, down” (kata) and “to think” (phronéō).” 10  Literally it means “to think against” or “to think little of.”

Jesus was able to endure the embarrassment or humiliation of the cross and the sins He bore by “despising the shame” associated with them. He simply did not pay attention to that shame because it was not His and it was contrary to God’s original design for humanity (cf. Genesis 2:25). This shame was of little consequence compared to the surpassing “joy that was set before Him” when He would sit “down at the right hand of the throne of God” (Hebrews 12:2). Christ endured the pain and shame of the cross because of the joy that awaited Him on the other side when He would sit down on His everlasting throne next to His heavenly Father (cf. Hebrews 1:8-9).

Christ endured being abandoned by His closest friends, being falsely accused, being beaten, mocked, spit upon, stripped down to His undergarments in public, and nailed to a cross like a terrible criminal to pay the penalty for all of our sins (Matthew 26:47-27:44; John 19:1-24). Worst of all, Jesus endured being rejected by His own Father in heaven when the sins of the world were placed upon Him because God is holy and righteous and cannot be around sin (Matthew 27:45-46). Did Jesus enjoy this shameful treatment associated with His crucifixion? No!!! He despised or looked down with contempt toward the shame associated with His sufferings and our sins. Jesus is showing us that just because something bad happens to you does not make you bad.

Like Jesus, we may have experienced shame by being falsely accused. During our childhood we may have been told, “You are no good.” “You cannot do anything right.” “You will never amount to anything.” Or like Jesus, some of us have been abandoned by those closest to us. Perhaps a parent abandoned you physically at an early age or they abandoned you emotionally. They lived in the same house with you, but they did not provide the emotional nurturing and support you needed. Like Jesus, you may have been beaten physically by those in authority over you. As a result, the voice of shame told you that this happened to you because you are bad. You may have been mocked and verbally mistreated and the voice of shame said you deserved this. Like Jesus, we may have experienced the humiliation of being put on display with minimal clothes on (or no clothes on) in front of others.

Or may be you have been shamed because of your commitment to follow Jesus. Perhaps you have been abandoned by those closest to you, falsely accused, beaten, mocked, or stripped naked all because of your love for Jesus. Please realize that Jesus understands how you feel because He has been through something similar (cf. Hebrews 4:15). Knowing He understands and sympathizes with us can embolden us to approach Him in prayer for His supernatural assistance. So instead of looking to our own shame whether it is based on our actions or the actions of others, we are to look to Jesus who despised the shame when He endured the cross on our behalf (Hebrew 12:2).

Prayer: PreciousLord Jesus, thank You for loving us so much that You were willing to have your garments removed so our shame could be replaced with the garments of salvation the moment we believe in You. Thank You for enduring the cross by despising the shame associated with it and the sins You bore, so we could be clothed with Your robe of righteousness. Knowing that You understand how we feel when we are abandoned by those closest to us or falsely accused, beaten, mocked, or stripped naked all because of our love for You, emboldens us to approach You in prayer for Your supernatural assistance to keep running the race You have set before us. We love You our Lord and our God. In Your matchless name we pray, Lord Jesus. Amen.