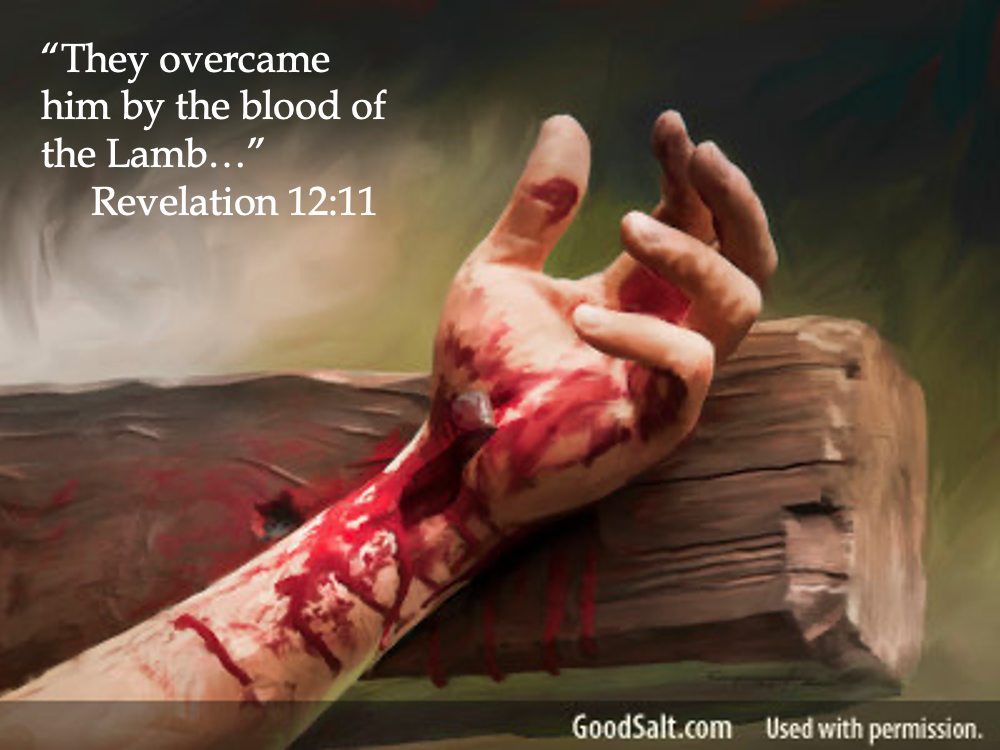 “And they overcame him by the blood of the Lamb and by the word of their testimony, and they did not love their lives to the death.” Revelation 12:11

After Satan and his fallen angels are “cast” down to earth at the midpoint of the Tribulation period (12:9), the apostle John writes: “Then I heard a loud voice saying in heaven, ‘Now salvation, and strength, and the kingdom of our God, and the power of His Christ have come, for the accuser of our brethren, who accused them before our God day and night, has been cast down.’” (Revelation 12:10). John hears “a loud voice… in heaven” praise God because the casting down of Satan and his fallen angels to earth signals that Jesus’ coming “kingdom” on earth is near and so certain that it is communicated as if it has already happened. 1 As in Revelation 11:15, this praise anticipates Christ’s coming as if it has already taken place. 2

The coming of Jesus’ kingdom to earth will result in the “salvation” of Israel. ﻿In the first half of the Tribulation the 144,000 converts are the “firstfruits” (cf. 14:4) of Christ’s saving work among the Jews, but at Jesus’ return “all Israel will be saved” (Romans 11:26). So in addition to the 144,000 Jews being saved during the first half of the Tribulation, many more Jews will be saved when Christ returns to earth at the end of the Tribulation. Nationally as well as individually, their sins will be forgiven through faith in Christ (cf. Isaiah 59:20-21; Acts 10:43; Romans 11:25-27). The kingdom will be ruled based on the “power of… Christ” and His commands (12:10a). 3

Before Satan is “cast down” to earth at the midpoint of the Tribulation, he is described as “the accuser of our brethren, who accused them before our God day and night.” “This indicates, first, that God has allowed Satan access to His divine presence. Second, it indicates Satan uses that access to level accusations against God’s people. He does that because he knows the Lord’s righteous character and that human sin breaks their fellowship with God. If Satan cannot prevent a person from being saved, he at least wants to steal the joy that comes from walking in fellowship with God.” 4

If you are a believer in Jesus Christ, what sins can Satan accuse you of today? The Devil cannot successfully accuse you of wrongdoing before God because Christ has already paid the penalty of your sin in full when He died in your place on the cross. The Bible says, “1 There is therefore now no condemnation to those who are in Christ Jesus… 33 Who shall bring a charge against God’s elect? It is God who justifies. 34 Who is he who condemns? It is Christ who died, and furthermore is also risen, who is even at the right hand of God, who also makes intercession for us.” (Romans 8:1, 33-34).  ﻿

“All of our sins—past, present, and future—have been paid in full by the blood of Christ! No accusation from Satan can stick to us or soil our reputation, because God’s grace and mercy have washed us clean from our transgressions.” 5

When Satan and his fallen angels are cast down to earth, his relentless accusations of believers before God will have ceased, but those who are on the earth will be subject to Satan’s attacks even though he can no longer accuse them in heaven. 6

Satan lost access to God’s throne in heaven, but God’s people on earth had not (cf. Romans 5:1-2; Hebrews 4:16). These believers had victory over Satan because they would not bow to the image of the Beast (cf. Revelation 13:15) but openly shared “the word of their testimony” even if it meant persecution or death. These followers of Jesus “did not love their lives to the death.” Instead, they loved serving and magnifying Christ more than their own lives. 7

As we conclude today’s message, let’s remember that there are two ways we can overcome the schemes of Satan:

LOOK TO JESUS AND HIS DEATH IN FAITH FOR THE FORGIVENESS OF ALL YOUR SINS. We can overcome Satan’s hateful accusations through the sacrificial death of Jesus Christ – “they overcame him by the blood of the lamb” (12:11a). Have you placed your faith in Christ Jesus alone for His complete forgiveness? Christ was born into this world despite all the opposition of hell some two thousand years ago (Revelation 12:4-5). What Jesus did for you and me was not easy.He went to war for us and paid for all our sins when He died on the cross (John 19:30; Colossians 2:13-14). He now offers you the greatest gift ever given, and He invites you to take it by placing your trust in Him and His death on the cross.

The Bible tells us, “All the prophets say it is true that all who believe in Jesus will be forgiven of their sins through Jesus’ name.” (Acts 10:43 NCV). Does the word “all” include you and me? Absolutely! It includes the best and the worst of people, and everyone in between. It is up to you whether you will receive His gift or not. Will you believe or trust in Jesus alone to forgive all your sins – including past, present, and future sins? If you do, you can be free of the accusations Satan brings against you.

Perhaps you have already believed in Christ for your salvation, but you may be struggling to feel that He has truly forgiven you. Maybe you have trusted Him as your Savior, but you are still living under condemnation, and it is time to let go of the guilt and shame. The devil is defeated every time you refuse to listen to his lying accusations. He may whisper, “What you did was too bad, too wicked for God to forgive!” Or“You can’t change! You’ll never be any different!“ Instead of paying attention to Satan’s lies, you reach out and believe that Jesus really did die to bring you and me a new life! When Christ died for your sins, how many of them were future?ALL OF THEM. Ignore Satan’s lies and receive the hope and transformation that only God’s forgiveness brings!

The second way to overcome the devil’s schemes is: LET JESUS RULE YOUR LIFE NO MATTER WHAT THE COST – “they overcame him… by the word of their testimony, and they did not love their lives to the death.” In other words, they overcame him by speaking the truth and living the truth even if it cost them their lives. We give the devil a black eye when we seek to live a life of integrity. When the person at church is the same person at work or in the home, Satan is defeated. Don’t let anything or anyone intimidate you from living for God, even the threat of death!

The Bible tells us, “14 Inasmuch then as the children have partaken of flesh and blood, He Himself likewise shared in the same, that through death He might destroy him who had the power of death, that is, the devil, 15 and release those who through fear of death were all their lifetime subject to bondage.” (Hebrews 2:14-15). Through His death, Jesus conquered death to free people from the fear of death.

Evans writes, “If the Son has set you free, then, the only power the devil has over you is what you permit him.

“Satan is ‘the father of lies’ (John 8:44), so he’ll try to trick you into giving him permission to exercise authority over you. But the devil no longer has the power of death (2:14). The gun he’s been ﻿intimidating you with has no bullets. Jesus Christ emptied its chamber into Himself. Thus, all Satan can do is deceive you into thinking the gun still has ammunition. But the fear of death should no longer make you a slave (see 1 Cor 15:51-57).” 9

Prayer: Father God, thank You so much for the incredible victory Jesus has already won through His shed blood on the cross for the sins of the world! Thank You that the penalty of sin, Satan, death, and hell are overcome through believing in the forever cleansing blood of the Lamb, Who died and rose again on our behalf so we should never die eternally, but be raised from the dead to live forever with our King. Please enable us to live each day for Jesus without fear, knowing He has already conquered our greatest fear which is death. Use us, Lord, to testify with our lives and lips to what Jesus has already done so multitudes may receive His forgiveness by believing in Him and live a life that is free from fear. In the life-giving name of Jesus Christ, we pray. Amen.

1. The word translated “have come” (egeneto) is the aorist tense, signifying a past event.