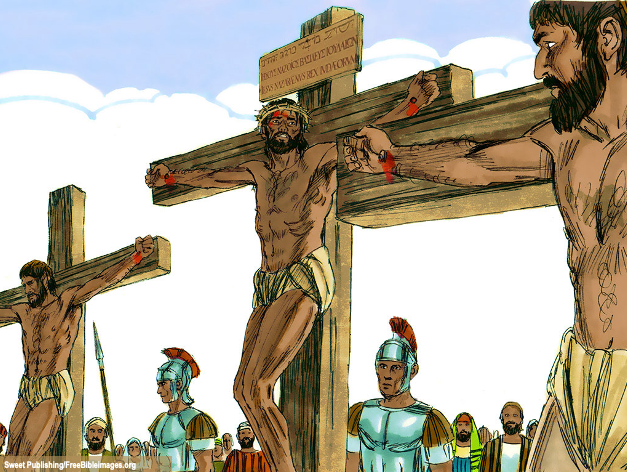 “Now Pilate wrote a title and put it on the cross. And the writing was: JESUS OF NAZARETH, THE KING OF THE JEWS.” John 19:19

The apostle John is presenting different pictures from the last day in Jesus’ life before His dead body is sealed in a tomb. We have learned from the first five pictures the following lessons:

– The two crosses teach that God gives each of us the freedom to choose (John 19:18b).

The next picture John presents to us teaches us that THERE IS NO PERSON OR LANGUAGE GOD WILL NOT USE TO PROCLAIM WHO JESUS IS (John 19:19-22). 1  Jesus has been lifted up on a cross and Pilate continues his power struggles with the Jews by placing a sign above Jesus indicating that He is “JESUS OF NAZARETH, THE KING OF THE JEWS.” (John 19:19). It was normal for the Romansto write the name of the condemned person and the crime for which they were being punished on the sign placed above them. Pilate maintains that Jesus is King of the Jews perhaps as a way of getting back at the Jews for hounding him to crucify Jesus.

What Pilate did not realize was his sign was also used by God to help people come to faith in Jesus. For example, in our last article, we saw that one of the thieves hanging on a cross next to Jesus said to Christ, “Lord, remember me when You come into Your kingdom.”(Luke 23:42). Why would this thief make reference to Jesus’ kingdom? Had he heard Jesus preach about the kingdom? Had someone else told him about Jesus’ kingdom? Or did this thief simply read the sign above Jesus’ head identifying Him as the King of the Jews?

Lucado writes, “The thief knows he is in a royal mess. He turns his head and reads a royal proclamation and asks for royal help. It might have been this simple. If so, the sign was the first tool used to proclaim the message of the cross. Countless others have followed, from the printing press to the radio to the stadium crusade to the book you are holding. But a crude wooden sign preceded them all. And because of the sign, a soul was saved. All because someone posted a sign on a cross.” 2

God used Pilate to proclaim the message of the cross through a sign to a thief hanging next to Jesus. That was not Pilate’s plan, but it was God’s plan. Pilate intended this sign to threaten and mock the Jews, but God intended to use Pilate’s sign as a tool for spreading the gospel message.

This tells us that there is no one God cannot use. If He can use an unbelieving political leader to lead a thief to Christ, He can use anyone. During my first year of seminary, one of my classmates told me one night in our dormitory that before he became a Christian, he had led many people to Christ as an evangelistic worker in a church. You do not have to be a Christian for God to use you. There is no person God will not use. That is meant to encourage us especially if we think God cannot use us because of some failure in our past or some weakness in our present. God is eager to use those who make themselves available to Him.

This leads to the second part of our lasting lesson: There is no language God will not use to proclaim the gospel. The message on the sign was the same, but the languages were different. Since Jesus was a King for all people, the message must be in the languages of all people. If all people were going to have an opportunity to enter His kingdom through faith alone in Him alone, they must hear or read His message in a language they understand. God wants the world to know that He loves them.

If you are reading this, then God has provided His gospel message in a language you can use to tell others Who Jesus is and what He can do for them. He is the King of the universe Who died in their place and rose from the dead so that “whoever believes in Him should not perish but have everlasting life” (John 3:16b).

Pilate refused to comply. “Pilate answered, ‘What I have written, I have written.’ ” (John 19:22). While Pilate meant for the sign to sting the Jews, God, in His sovereignty, meant it to declare to the world the truth about His Son. 4  John wants us to be aware that Jesus is the King of the Jews and no objection, protest, or even crucifixion can deprive Him of this rightful position. No circumstance can diminish the power of Who Jesus is. The soldiers take Jesus to the cross to be crucified and drive nails through His hands and feet, and still the sign reads King. There is no circumstance that can diminish the power of Who Jesus really is in my life or in yours. That is what this sign also tells us.

We also learn from this scene that people will try to change the truth about Who Jesus is, but they will always fail. We talk about spin doctors today – people who come in after the event and try to reframe what happened especially when it comes to politics. There were spin doctors in Jesus’ day. The Jewish religious leaders were spin doctors. They come in after the event had happened, after the sign was put in place and said, “Change the sign. Let’s make it read something different.” In one courageous act we see Pilate standing up to those thugs and saying, “No, I won’t change it.” 5

Prayer: Lord God Almighty, we are so impressed with how You used a sign written by one who rejected Jesus to lead a thief to Christ. Throughout history, You have demonstrated there is no person You will not use to spread Your message to others. You use the worst of sinners and the best of sinners to tell the world about Your one of a kind Son, Jesus Christ. Thank You, Lord, for using others to tell us about the identity of Jesus and what He can do in our lives. Please help us to pay it forward so others can discover this life-changing message. Since Jesus is a King for all people, You are providing this message in the languages of all people so everyone can know how much You love them and want to save them. Thank You, Lord God, for providing this message in our own language so we could understand and believe. Please enable those who have not yet heard this message in their own language to hear it soon so they don’t miss any signs You are sending their way. In the name of Almighty God, Jesus Christ, we pray. Amen.