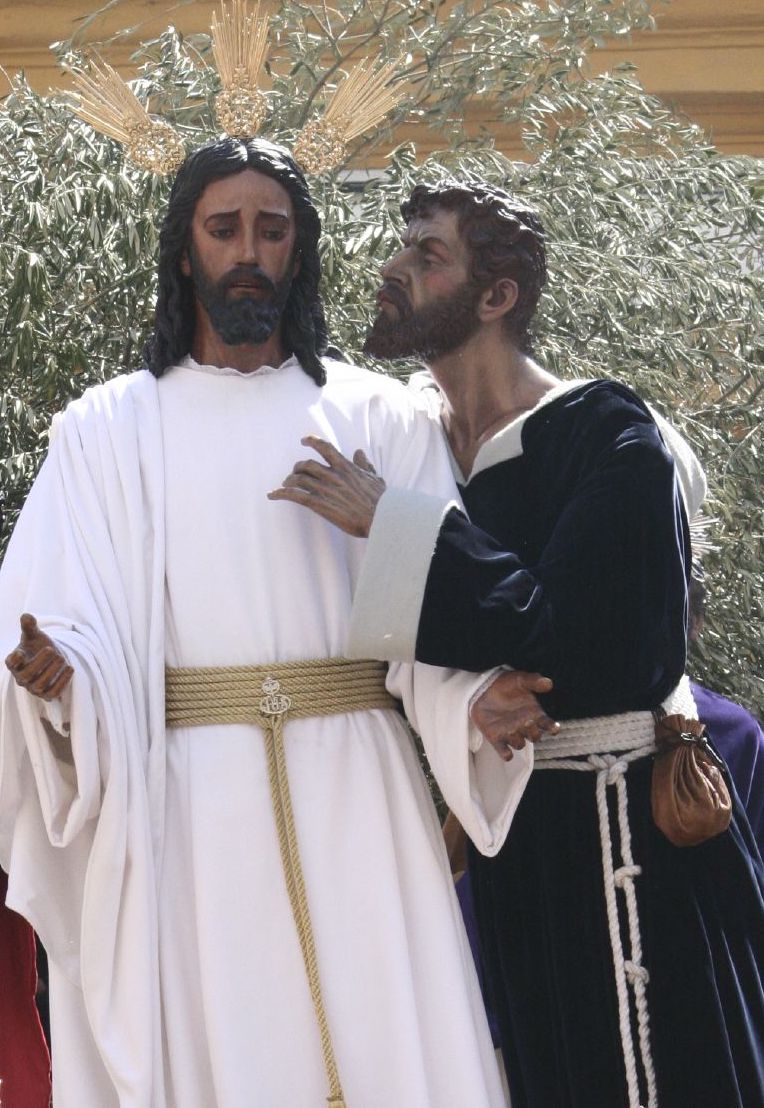 Judas Iscariot is thought by many to be saved because he was a disciple of Jesus Christ. But what does the Bible say? The gospel of John provides evidence that Judas Iscariot was an unbeliever, and therefore, will not be in heaven:

I. “‘ 64 But there are some of you who do not believe.’ For Jesus knew from the beginning who they were who did not believe, and who would betray Him…70 Jesus answered them, ‘Did I not choose you, the twelve, and one of you is a devil?’  71 He  spoke of Judas Iscariot, the son of Simon, for it was he who would betray Him, being one of the twelve.” John 6:64, 70-71

Near the end of His bread of life discourse (John 6:26-71), Jesus acknowledged that “some” of the people who had been following Him and listening to His instruction “did not believe” in Him (6:64a). They were “disciples” (6:66) – those who were sitting under His teaching – but they were unsaved. “Many of His disciples” found His words difficult (6:60, 66) and “some” of them “did not believe” (6:64a). So this multitude of people listening to Jesus’ teaching was comprised of believing and unbelieving disciples or learners of Jesus. The unbelieving people in Jesus audience included those “who would betray Him” (6:64b).

The phrase “who would betray Him” connects to Judas Iscariot in verses 70-71: “Jesus answered them, ‘Did I not choose you, the twelve, and one of you is a devil?’ He spoke of Judas Iscariot, the son of Simon, for it was he who would betray Him, being one of the twelve.” Christ admits that He chose Judas as He did the others. Christ’s selection of His twelve disciples was for service and fruit-bearing (cf. John 15:16), not for salvation. Out of the hundreds who were following Him, Jesus chose one who would refuse to believe in Him and would eventually betray Him. What an amazing picture of God’s grace. He desires all people to be saved – even those who will betray Him.

Judas had every opportunity to know and serve Jesus like the other Eleven. Yet in the spirit of “a devil,” he actively opposed Christ (6:70b). Eventually Judas would betray Christ and hand Him over to His enemies (7:71). This was all a part of God’s plan and purpose for His Son. Judas stayed with the group; he lived with them, ate and slept with them, performed miracles with them, and yet he did not believe in Jesus for everlasting life.

Outwardly Judas was a disciple (“one of the twelve”) who enjoyed the privilege to be in Jesus’ inner circle of friends (7:71a). He was given a prominent position as treasurer (12:6) and kept stealing from the money box. No doubt he felt important being associated with Christ who brought hope and healing to so many. Even Judas had deceived the eleven other disciples! They did not know that he was a fake, but Jesus knew. Inwardly, Judas was a traitor, an enemy opposed to all that God wants.

The other disciples did not know about Judas’ unbelieving heart, but “Jesus knew from the beginning who they were who did not believe, and who would betray Him” (6:64b). When Peter told Jesus, “We have come to believe and know that You are the Christ, the Son of the living God” (6:69), this does not mean Judas had believed in Jesus as the Christ, the Son of the Living God. Peter was not aware of Judas’ unbelieving heart at the time he said this. But Jesus new of Judas’ unbelief (6:64b, 70-71; 13:10-11; 17:12).

Another argument in favor of Judas being an unbeliever is seen in John 13:27 where we are told, “Now after the piece of bread, Satan entered him.” Judas’ persistent unbelief toward Christ allowed Satan to enter his body and take control of him so he could do his evil work “quickly” (13:27). The fact that “Satan entered Judas” also lends support that Judas was an unbeliever because only unbelievers can be possessed by Satan or demons. Believers have Jesus indwelling them through His Holy Spirit and He promises never to leave them nor forsake them (cf. Romans 8:11; I Corinthians 6:19; Galatians 2:20; Hebrews 13:5; I John 4:4).

When Jesus got up from the Last Supper to wash His disciples’ feet (13:1-7), Simon Peter refused to let Jesus wash his feet (13:8a) perhaps because he did not want Jesus to degrade Himself by performing such a lowly task reserved for slaves. Christ responds to Peter by telling him, “If I don’t cleanse you from the effects of sin (dirt on your feet), you can have no part (fellowship) with Me” (13:8b). Peter responds, “If fellowship with You, Lord, depends on cleansing, then wash not only my feet but my hands and head, too” (13:9)!

In the first century, there were no bathing facilities in small houses. So a person had to go to a public bathhouse to bathe. When invited to a meal, a person would first go to the public bathhouse and bathe, and then put on clean clothing, anoint himself with fresh oil, and proceed to the home where he would be served a meal. On the way from the bathhouse to the home, the guest’s feet got dirty. Hence, the host provided a basin of water so that the one who already had a bath and cleansed his entire body could sponge the dirt off his feet.

Jesus is referring to two types of cleansing when He says, “He who is bathed needs only to wash his feet, but is completely clean; and you are clean, but not all of you” (13:10). The first type of cleansing refers to the complete cleansing of regeneration which takes place at the moment of faith in Jesus (cf. Titus 3:5; Revelation 1:5). This is seen in the word “bathed” (λούω) which refers to bathing the entire body. This verb is in the perfect tense which conveys the idea of a permanent cleansing that has continuing results to the present. A person only needs one complete bath spiritually. This is a one-time experience. The Holy Spirit performs this complete cleansing at the moment of faith in Jesus for eternal life. Some believers think they need to be totally bathed over and over again. They fail to understand that God’s water or soap is guaranteed for eternity. Once you believe in Christ, you will need the second type of cleansing that He speaks of next.

This second type of cleansing refers to daily forgiveness in order to have fellowship or closeness with God. This cleansing is represented by the word “wash” (νίπτω) which means to wash parts of the body. This fellowship forgiveness (cf. Matthew 6:14-15; Luke 11:4) is based upon the confession of sin (I John 1:9). So Christ is saying in verse 10, “He who is bathed [regeneration] needs only to wash his feet [fellowship] but is completely clean.” Every bathed person (Christian) needs daily cleansing of his dirty feet to have fellowship with Christ.

All but one of the disciples were “completely clean” in their position before God and could have fellowship with the Lord (13:10c). John explains that the one who had not experienced the cleansing bath of salvation was the one “who would betray” Jesus, i.e. Judas (13:11; cf. 13:21-30). Judas had not experienced the cleansing bath of salvation because of his refusal to believe in Christ (cf. John 6:64, 70-71; 17:12). It was not Judas’ betrayal of Jesus that made him unsaved. It was his unbelief toward Jesus that caused him not to be completely clean in his position before God.

III. “While I was with them in the world, I kept them in Your name. Those whom You gave Me I have kept; and none of them is lost except the son of perdition, that the Scripture might be fulfilled.” John 17:12

As Jesus was praying for His disciples in the Garden of Gethsemane the night before His crucifixion and Judas’ death, He refers to keeping His disciples from being spiritually “lost except the son of perdition” who is Judas (17:12). The reason Judas is spiritually “lost” is because he never believed in Jesus (6:64, 70-71; 13:10-11). He is the “son of perdition” or “one doomed to destruction” because of his refusal to believe in Christ alone for everlasting life. Judas “destroyed” himself by refusing to believe in Christ and thus fulfilled Scripture (Psalm 41:9) and God’s purpose.

Before Judas hung himself (Matt. 27:3-5; Acts. 1:18), the Bible never says he believed in Jesus for everlasting life.  Therefore, I believe it is a strong argument for Judas being an unbeliever and confined to the Lake of Fire in the future.

For the sake of illustration, let’s say Judas did believe in Christ for everlasting life before he betrayed the Lord by turning Him over to His enemies and then committed suicide by hanging himself. Would Judas be in heaven? Absolutely, because he would “have everlasting life” (John 3:16) which by definition cannot be lost because it has no end. Judas would be in heaven because no one can snatch him out of God the Son’s and God the Father’s hands (John 10:28-29). He would be in heaven because Christ died for all Judas’ sins including his betrayal and suicide (Colossians 2:13-14). But Judas would not have eternal rewards in heaven which require faithfulness to Christ to the end of one’s life (cf. I Corinthians 9:24-27; 2 Timothy 2:12; James 1:12; Revelation 2:10, 25-27; 3:11-12).

Conclusion: The gospel of John makes it clear that Judas Iscariot, the one “who would betray” Christ, did “not believe” in Jesus (6:64, 70-71) and therefore was not “completely clean” in his position before God (13:10-11). Therefore, Jesus describes him as being spiritually “lost” and a “son of perdition” (17:12).

Why would Jesus allow an unbeliever to have such a close association with Him for three and a half years? Perhaps it was because He loved Judas and wanted to give Him ample time to believe in Him for everlasting life (cf. John 13:1). This also magnifies the grace of Jesus Christ which gives great blessing to those who do not deserve it.

On Judgment Day there will be many false prophets (Matthew 7:15) who stand before Jesus and appeal to their words (“Lord, Lord”)  and to their good works (“prophesied…cast out demons…done many wonders”) that they have done “in His name” for His glory as the basis of their entrance into the kingdom of heaven (Matthew 7:21-22). And Jesus will say to them, “I never knew you; depart from Me, you who practice lawlessness” (Matthew 7:23). Why does He say this? Because they had failed to do “the will of the Father in heaven” as it relates to entering the kingdom of heaven (Matthew 7:21b). Jesus said, “And this is the will of Him who sent Me, that everyone who sees the Son and believes in Him may have everlasting life; and I will raise him up at the last day” (John 6:40; cf. 3:5, 15-16). Until a person is rightly related to Jesus by believing in Him for everlasting life, all their good works, words, and thoughts are “lawlessness” before a holy God (Matthew 7:23; cf. Isaiah 64:6).

Do you “believe in the Son,” Jesus Christ, for “everlasting life”? If so, then God promises that you now have “everlasting life” and your name is written in the Book of Life so that you will enjoy a home in heaven (John 3:36a; Revelation 21:27). But if you reject Jesus Christ or “do not believe the Son,” you “shall not see life” in heaven, “but the wrath of God abides”on you both now and forever in the Lake of Fire (John 3:36b; Revelation 20:15). It does not matter how many good works you have done for Jesus, if you do not believe in Him alone for His gift of everlasting life, you will still suffer torment forever in the Lake of Fire (Romans 4:5; Ephesians 2:8-9).