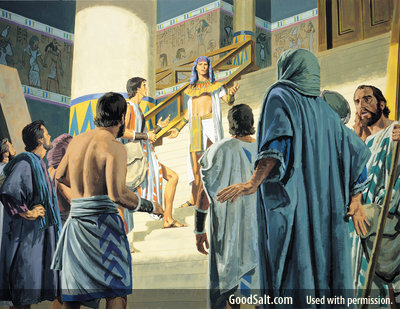 “But as for you, you meant evil against me; but God meant it for good, in order to bring it about as it is this day, to save many people alive.” Genesis 50:20

After Joseph’s father, Jacob, has died, his brothers fear that the only thing that has kept Joseph from taking revenge on them has been his respect for his father. So, they come to Joseph begging for forgiveness – even though he gave them that forgiveness many years earlier. How does Joseph respond? Does he avenge the wrongs that they did to him?

He said, “You meant evil against me; but God meant it for good” (Genesis 50:20a). Joseph doesn’t try to rewrite history saying, “Oh, I know you guys didn’t mean it.” He’s honest – “You guys tried to harm me – but God intended your harm for good.” Romans 8:28 says, “We know that God causes all things to work together for good for those who love God and are called according to His purpose.” This “all things” means “all things” – including people’s evil intentions, their desire to cause harm, and sin. This is an absolutely amazing promise from God! Nobody can do anything to you that God cannot bring good from.

We see it clearly in Joseph’s life – sold into slavery, falsely accused and imprisoned – which was exactly where, in the strangest kind of way, Pharoah would be able to hear about him. Then Joseph says, “God meant it for good, in order to bring it about as it is this day, to save many people alive” (Genesis 50:20b). Joseph experienced tremendous pain – heartache, difficulty, problems – but God used all of that for incredible good – the saving of many lives. And as it turned out, not just the people of Egypt, but also his own family – including the very men who did him wrong – his brothers.

I have experienced this personally. God has used the most painful experiences of my life to help and bless others. He has used my weaknesses and failures much more than He has used my “so-called” strengths.

It is important for us to see God’s ability to do far more through our trials than through our successes. God causes all things to work together for good for those who love Him and are called according to His purpose. That means that many can gain through our pain!

Prayer: Father God, thank you for reminding us that we can face the wrongs done to us by others knowing that nobody can do anything to us that You cannot bring good from. When people do wrong to us, we can be encouraged to trust the One Who can bring gain to many through our pain. In the transforming name of Jesus Christ we pray. Amen.