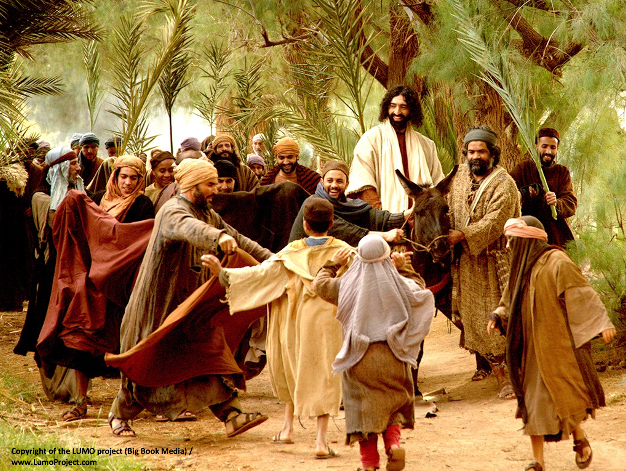 “The next day a great multitude that had come to the feast, when they heard that Jesus was coming to Jerusalem.” (John 12:12). “The next day” probably refers to Monday when the Passover lamb was selected and set aside to be slain and eaten for the Passover. 1 Jesus was going to Jerusalem to be sacrificed as our Passover Lamb, the Lamb of God (John 1:29; cf. I Corinthians 5:7). To His disciples, this did not seem like a Triumphal Entry. They may have thought to themselves, “Yes, Lord there are many who have believed in You, but the religious leaders, the ones with a lot of power, do not believe in You. In fact, they want to kill You and Lazarus. How can this be a triumphal entry when there is a warrant out for Your arrest? Where is the victory in this?!”

Prior to Jesus’ entry into Jerusalem, Luke tells us that Jesus, “31…took the twelve aside and said to them, ‘Behold, we are going up to Jerusalem, and all things that are written by the prophets concerning the Son of Man will be accomplished. 32 For He will be delivered to the Gentiles and will be mocked and insulted and spit upon. 33 They will scourge Him and kill Him.’” (Luke 18:31-33). Now Jesus is saying, “Let’s go up to Jerusalem and have a Triumphal Entry!” The disciples are saying, “Wait a minute, Lord. You call this a Triumphal Entry?”

John informs us that “a great multitude… had come to the feast, when they heard that Jesus was coming to Jerusalem.” (John 12:12). Ellicott describes the scene as the Lord entered Jerusalem:

“It is not hardly possible to form a just conception of the appearance which Jerusalem and its vicinity must have presented at the season of the Passover. All the open ground near the city and perhaps the sides of the very hill down which our Lord had recently passed were now, probably, being covered with the tents and temporarily erected structures of the gathering multitudes, who even thus early would have most likely found every available abode in the city completely full. We are not left without some data of the actual amount of the gathered numbers, as we have a calculation of Josephus based upon the number of lambs sacrificed (256,500), according to which it would appear that even at the very low estimate of 10 persons to each lamb the number of people assembled must have been little short of 2,700,000, without taking into consideration those who were present but incapacitated by legal impurities from being partakers in the sacrifice… There would thus have been present not much short of half of the probable population of Judea and Galilee… These observations are not without importance considered theologically. They show that our Lord’s rejection and death is not merely to be laid to the malevolence of the party of the Sanhedrin and to the wild clamors of a city mob, but may justly be considered, though done in partial ignorance (Acts 3:17), the act of the nation. When Pilate made his proposal, it was to the multitude (Mark 15:9), and that multitude we know was unanimous (John 18:40).” 2

The Passover “feast” would be followed by the seven-day Feast of Unleavened Bread. When this “great multitude… heard that Jesus was coming to Jerusalem” they were eager to see what was going to happen. Perhaps it seemed to some of them that Jesus was defying the Sanhedrin who were plotting to put Him to death (cf. 11:53). “When they heard that Jesus was coming to Jerusalem, took branches of palm trees and went out to meet Him, and cried out: ‘Hosanna! Blessed is He who comes in the name of the Lord! The King of Israel!’ ” (John 12:12b-13).

This great crowd “took branches of palm trees,” which signified a triumph or victory. 3  This was a way of honoring and respecting a conqueror. 4  Perhaps they were honoring Jesus because He conquered death by raising Lazarus. When the people “cried out: ‘Hosanna!’ ” (Ὡσαννά), this originally meant “Save now we pray.” 5  They wanted Jesus to deliver them from the domination of Rome! The words, “Blessed is He who comes in the name of the Lord! The king of Israel” are from Psalm 118:26 which speaks of the presentation of Israel’s Messiah-God. They see Jesus as their Messiah because of the manifestation of His Messianic power when He raised Lazarus from the dead.

The donkey was a symbol of peace and gentleness. 6  In Luke’s account of the Triumphal Entry, we read that the people cried out, “Blessed is the King who comes in the name of the Lord! Peace in heaven and glory in the highest!” (Luke 19:38). Christ came to bring “peace in heaven” at His First Coming by suffering on the Cross. Remember when Jesus was born, the angels said, “Glory to God in the highest, and on earth peace, goodwill toward men!” (Luke 2:14). Peace on earth will take place when Jesus returns to earth as King at His Second Coming. The First Coming of Christ brought spiritual peace in heaven through the cross. The Second Coming of Christ will bring peace on earth when Jesus rules as King of kings and Lord of lords! The first triumph of Christ was a spiritual or an inward triumph in the heavens. The second triumph of Christ will be on earth and it will be an outward, material triumph, subjecting the nations of the earth to His rule so that there will be universal peace among all people.

Before Jesus entered Jerusalem, He told His disciples, “Go into the village opposite you, where as you enter you will find a colt tied, on which no one has ever sat. Loose it and bring it here. And if anyone asks you, ‘Why are you loosing it?’ thus you shall say to him, ‘Because the Lord has need of it.’ ” (Luke19:30-31). By doing this, the Lord is letting His disciples know that He is in control. It was like the Lord already talked to these people and set the whole thing up. “I have planned this entry into Jerusalem even though I am going there to be crucified.”

John tells us that Christ’s entry into Jerusalem on a donkey had been planned for centuries. “Fear not, daughter of Zion; Behold, your King is coming, sitting on a donkey’s colt.” (John 12:15). When Jesus rode a donkey into Jerusalem, He fulfilled Zechariah 9:9. God is in control. He had this planned hundreds of years earlier. He planned on bringing a spiritual triumph through His Son’s death on the cross to establish peace in heaven.

We may be looking for a material triumph instead of a spiritual triumph. That is not God’s primary concern right now. We are not going to defeat the world. Christ will do that at His Second Coming (Revelation 19:11-21). He will subject the world to His rule then (Psalm 2; Revelation 20:1-6). You and I are not going to bring the entire world under the will of God. Christians may try to force a material triumph, but that will only lead to more frustration.

Two times the word for “triumph” (θριαμβεύω) is used in the New Testament. Colossians 2:15 says, “Having disarmed principalities and powers, He made a public spectacle of them, triumphing over them in it.” The death of Jesus did three things to the spiritual rulers of darkness. It disarmed them, displayed them, and dethroned them. One Bible commentator says this about the verse: “The picture, quite familiar in the Roman world, is that of a triumphant general leading a parade of victory…” 7 Another commentator writes: “It is more natural to view the principalities and powers here as the defeated foes, driven in front of the triumphal chariot as involuntary and impotent witnesses to their conqueror’s superior might.” 8

The cross of Jesus Christ provided a spiritual triumph, not a material triumph. Jesus is Head of a new humanity, a new group of people called the Church, who can respond to evil differently than the rest of the world. As the Son of God, He defeated the spiritual forces of darkness. We are now “in Christ” as believers and we are meant to enjoy this triumph.

The second use of this word for “triumph” (θριαμβεύω) is found in 2 Corinthians 2:14 which says: “Now thanks be to God who always leads us in triumph in Christ and through us diffuses the fragrance of His knowledge in every place.” God is the One who takes us and leads us into the triumph of Christ. What am I supposed to do then? Start thanking God for your spiritual triumph. As we yield to the Lord and thank Him, He is going to lead us into the triumph of Jesus which is a spiritual or inward triumph. We may want a material triumph. We tell ourselves, if I could just be released from jail or have the perfect car, job, health, spouse, family, friends, and church, then I will be fulfilled. But there is no life in that kind of existence.

Prayer: Lord Jesus, I must admit that I am a lot like the disciples. I also can look for a material triumph instead of a spiritual triumph. I can look for victory in my external circumstances instead of in my internal attitudes. I can so easily believe the lie that says, “If you are a Christian, everything will go smoothly in life. You will have no more difficulties or trials.” Please forgive me, my Lord and my God, for looking in the wrong places for Your victory. Your First Coming provided a spiritual triumph on the cross whereby peace with God in heaven was made possible through Your shed blood. Thank You, that I now have peace with the Lord God of heaven and earth through faith in You, Jesus. You now live inside me through Your Holy Spirit Who can enable me to respond in a God-honoring manner to the evil that is flourishing in the world today. I am now trusting You to lead me into this spiritual triumph that can manifest Your fragrance or attitude in all I think, say, and do. Yes, I am looking forward to Your Second Coming which will usher in Your material triumph whereby all nations will be brought under Your rule, and there will be peace on earth among all cultures and countries forever! But until then, my focus remains on You to lead me into spiritual victory! In Your matchless name I pray. Amen.

This is the fourth in a series of videos about the future as recorded in the last book of the Bible, the book of Revelation. This video focuses on the most significant event on God’s Prophetic Calendar – the Second Coming of Christ to earth.

The Revelation Art is used by permission of Pat Marvenko Smith, copyright 1992. To order art prints visit her “Revelation Illustrated” site, http://www.revelationillustrated.com. The music and video scene in this video is used with permission from the producers of the video entitled “The Free Gift.”