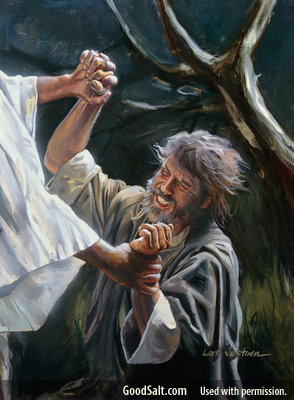 “Then Jacob was left alone; and a Man wrestled with him until the breaking of day.” Genesis 32:24

What would you most like to change about yourself? If you could change one thing what would it be? Would you like to have more confidence? Be more relaxed? Organized? Perhaps you would like to be more outgoing, more self-controlled, more flexible, less anxious, less fearful or less controlling? One of the greatest tragedies is a person who is never willing to change. Change is a necessary part of the Christian life. If you are not changing, then you are not growing. We need to change in order to remain fresh and to keep moving forward in the Christian life.

Most of us are interested in changing because we recognize there is always room for improvement. Many of us admit we want to change and try to change, but it doesn’t happen. We try to go on a diet, but it lasts an afternoon. We join health clubs and our excitement runs strong for a few weeks. Then we fall back into the same old rut. We go to seminars or counseling, but we keep falling back into old patterns of behavior. We want to be more positive and outgoing, and complain less, but it doesn’t work. The main reason is because we work on the exterior – our outside behavior – instead of working on the interior – our heart. Any lasting change must begin on the inside. Before we can make lasting changes to our behavior, we must first experience a change in our hearts. And this is a work of God!

During the next few days, Lord willing, we are going to look at a process that God uses in changing us – in making us more like Jesus Christ. God wants to change us and if you are a growing Christian, you will want to change as well. Turn with me to Genesis 32:24-30 where we will see how to change by looking at the life of Jacob, the father of Joseph. The incident in this passage was a turning point in Jacob’s life. It illustrates how God can change us as individuals.

Jacob was somewhat of a shifty guy. At birth he grasped his twin brother Esau’s heel and was given the name “Jacob” which means “heel-holder” (Genesis 25:26). Later Jacob deceived his father, Isaac, into giving him Esau’s blessing, and Jacob’s name came to mean “supplanter” – “one who takes the place of another by trickery.” (Genesis 27:1-29). His name took on the meaning of a “cheater, schemer.”

But a wrestling match transformed Jacob into a new person (Genesis 32:24-30), and he became “Israel,” the man whom the entire nation of Israel would be named after. In this passage we see the process God uses to change us into the kind of people He wants us to become. It communicates to all of us that we don’t have to stay in the rut where we are: God will help us to change and overcome the weaknesses in our lives, if we will just let Him.

How do we let Him? After Jacob sent all his family and possessions across the river on the edge of the Promised Land (Genesis 32:22-23), Jacob had a wrestling match with an angel (Genesis 32:24-30). What does a wrestling match with an angel (Hosea 12:4) several thousand years ago have to do with changing you and me today? There are four steps in these verses that God uses to change us into the people He wants us to become.

First, we discover that GOD USES THE PROCESS OF A CRISIS (Genesis 32:24). We read, “Then Jacob was left alone; and a Man wrestled with him until the breaking of day.” (Genesis 32:24). An unidentified man assaulted Jacob, and he had to fight for his life. The “Man” was the Angel of the Lord. The Bible tells us, “3 When he [Jacob] became a man, he even fought with God. 4 Yes, he wrestled with the Angel [of the Lord] and prevailed.” (Hosea 12:3-4 LB). Notice that God took the initiative in wrestling with Jacob, not vice versa. Why?

God was bringing Jacob to the end of himself. ﻿“The fact that the match lasted till daybreak is significant. For the darkness symbolized Jacob’s situation. Fear and uncertainty seized him. If Jacob had perceived that he was to fight God, he would never have engaged in the fight, let alone have continued all night. On the other hand the fact that the wrestling lasted till daybreak suggests a long, decisive bout.” 1

Jacob had an all-night wrestling match with an angel, and the angel was really struggling, but it was a no-win situation for both of them. By dawn Jacob was getting tired of the struggle because he saw that he could not win. It was a situation beyond his control which was something Jacob was not used to. Jacob had been able to handle his problems using his own craftiness until now. Now Jacob is facing a crisis he cannot control with his scheming.

When God wants to change us, He begins by placing us in a frustrating situation that is totally beyond our control. We cannot win, and we just keep getting more and more tired. If we are in a crisis now, it may be because God is getting ready to change us for the better. We rarely change until we get uncomfortable and dissatisfied enough to let God do something in our lives.

The Bible tells us, “Sometimes it takes a painful experience to make us change our ways.” (Proverbs 20:30 GNT). God loves us so much that He makes us uncomfortable if that is what it takes, to make us willing to change and grow. He will allow a crisis or problem in our lives to get our attention. He needs to do this because we won’t change until our fear of change is exceeded by the pain we are experiencing.

Prayer: Father God, thank You for loving us enough to allow us to face a crisis so we become willing to change and grow. We often don’t like the pain associated with it, but we realize that were it not for the pain, we would probably continue down the path of self-destruction. You understand us better than we do. You know that our fear of change must be exceeded by discomfort before we are open to change. Thank You our Lord and our God for pursuing us and giving us opportunities to grow. In the mighty name of Jesus Christ we pray. Amen.