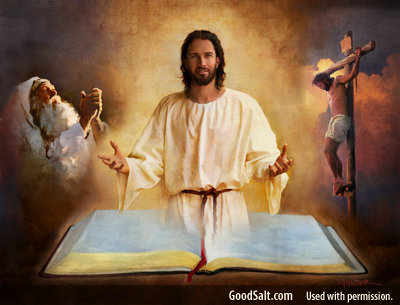 “37 But although He had done so many signs before them, they did not believe in Him, 38 that the word of Isaiah the prophet might be fulfilled, which he spoke: ‘Lord, who has believed our report? And to whom has the arm of the Lord been revealed?’ ” John 12:37-38

The third way to respond to those who refuse to believe in Christ is to CONTEMPLATE THE SCRIPTURES’ EXPLANATION FOR THEIR UNBELIEF (John 12:37-41). After Jesus’ final words to the public before His death on the Cross (John 12:20-36), John informs us,  “But although He had done so many signs before them, they did not believe in Him.” (John 12:37). The verb translated “had done” (pepoiēkotos) is in the perfect tense, meaning that Jesus’ “many” miraculous “signs”were completed in the past but had continuing results to the present. Christ had given them undeniable evidence that He was the Messianic Light of the world, but they stubbornly refused to believe in Him.

Their unbelief was anticipated hundreds of years earlier in Isaiah 53:1 which John now quotes. “…That the word of Isaiah the prophet might be fulfilled, which he spoke: ‘Lord, who has believed our report? And to whom has the arm of the Lord been revealed?’ ” (John 12:38). The unbelief of most of the Jews in Jesus’ day was necessary to fulfill Isaiah’s prophecy. Even though many Jews rejected Christ, God’s purposes were still being fulfilled. The Lord is still in control.

Wiersbe observes, “John 12 records the second major crisis in the ministry of our Lord as seen by John the apostle. The first occurred when many of His disciples would no longer walk with Him (John 6:66), even though He is ‘the way’ (John 14:6). In this chapter, John tells us that many would not believe in Him (John 12:37ff), even though He is ‘the truth.’ The third crisis will come in John 19: even though he is ‘the life,’ the leaders crucified Him.” 1

“39 Therefore they could not believe, because Isaiah said again: ‘40 He has blinded their eyes and hardened their hearts, lest they should see with their eyes, lest they should understand with their hearts and turn, so that I should heal them.’ ” (John 12:39-40). They “did not believe” in Jesus (John 12:37), therefore they “could not believe” in Him (John 12:39). Because they had refused to believe in Christ earlier, God stopped drawing them to Himself. John provides a rather free rendering of Isaiah 6:10 to show that when people reject what light God has given them, as Israel did in the face of enough miraculous signs to convince them that Jesus was their promised Messiah, God may judicially impose a spiritual blindness on “their eyes” and a spiritual hardening of “their hearts” (John 12:40). Like people, God also has a limit to His patience. The unbelief of these Jews was part of God’s sovereign plan which He predetermined before Christ came to earth. Through the Jews’ rejection of Jesus, salvation would come to the Gentiles (John 12:20-22; cf. Romans 11:7-12).

“These things Isaiah said when he saw His glory and spoke of Him.” (John 12:41).  The implications of this verse are startling! Isaiah 6 opens by saying: “1 In the year that King Uzziah died, I saw the Lord sitting on a throne, high and lifted up, and the train of His robe filled the temple. 2 Above it stood seraphim; each one had six wings: with two he covered his face, with two he covered his feet, and with two he flew. 3 And one cried to another and said: ‘Holy, holy, holy is the Lord of hosts; the whole earth is full of His glory!’ 4 And the posts of the door were shaken by the voice of him who cried out, and the house was filled with smoke. 5 So I said: ‘Woe is me, for I am undone! Because I am a man of unclean lips, and I dwell in the midst of a people of unclean lips; for my eyes have seen the King, the Lord of hosts.’” (Isaiah 6:1-5).

John says that the prophet Isaiah saw Jesus in His Messianic “glory and spoke of Him.” He identified Jesus with the Yahweh (“the Lord of hosts” literally is “the Yahweh of armies”) of the Old Testament. 2  This confirms who Jesus is and how reliable the Bible is. This may also explain why the Jews had difficulty believing in Christ, because Jesus spoke of His death (John 12:24, 32-33) on the Cross, whereas the Jews were expecting a glorious Messiah who would subject their enemies to His rule.

When people do not respond in faith to Christ over a long period of time, do not take it personally. Their continual rejection of what light God has given them may result in God judicially imposing a hardening of their hearts. Their stubborn unbelief is also fulfilling God’s purposes which we may never discover in this life. We can still rest in the fact that God is in control of the situation even though the outcome is not what we desired. Continue to pray to the Father to open their hearts through circumstances in their lives that will make them ready to hear and believe the good news of Jesus.

Prayer: Father God, I must confess that I do not understand all the ways You work in the lives and hearts of people. So I pray for those who have continued to reject Your Son, Jesus Christ. Please work in their lives and circumstances in such a way that Your people may share the good news of Your grace with them. Thank You for reminding me of Who Jesus is – He is the Yahweh of armies Who sits on His throne in heaven guiding events here on earth and filling the world with His glory. My trust in Him and His prophetic word is strengthened from these verses today. Nothing takes You by surprise, my Lord and my God. My times are in Your hand. In Jesus’ name I pray. Amen.